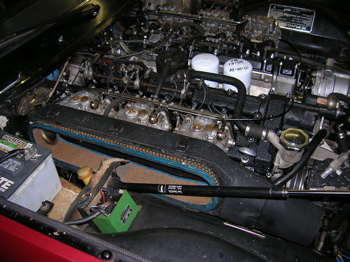 Last week we finished up the Ferrari 365GTC/4 that we’ve been working on all too long! The last head gasket seems to be doing its job, so we’re all relieved. 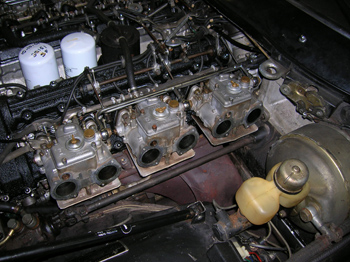 François spent some time tuning the carburetors, and showed my how finicky these Weber DCOE side drafts were to get right. Small changes in the adjustment screws seemed to affect these carbs way more than my downdraft Webers. 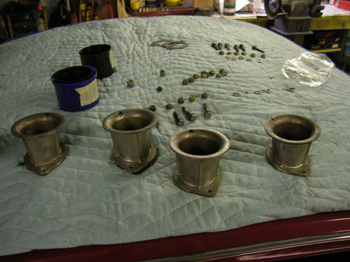 Now that the carbs were tuned, we prepared to install the air cleaners. 365GTC/4s and 365GT/4s have DCOE carburetors with air cleaners that are notoriously hard to put back together. The general theory is these engines were assembled with the air cleaners before they were installed in the car. Once the engine is in the car, getting to all the nuts, washers, velocity stacks, air cleaners, and air cleaner covers is near impossible. Through the years, François has been modifying the way the air cleaner assembly mounts to the carbs to make things a little easier. He starts by numbering the velocity stacks so they go back in the right order. A couple of them are clearanced with relief cuts, so having them go back where they belong is pretty important. 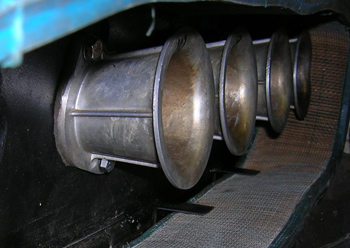 The studs on the carburetor bodies were removed, and the bottom row of fasteners were changed to bolts. 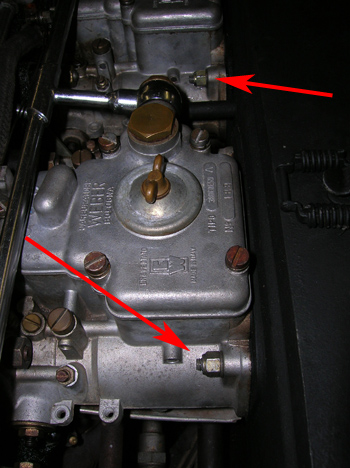 For the top row, the threads were drilled out to accept through bolts held by nylock nuts to hold things together.

The air cleaner assembly was set in place with the air cleaner loosely fitted, and starting with the velocity stack closest to the windshield, the bolts and nuts were loosely bolted in place. Once all the holes were lined up, the rear velocity stack was tightened down and the next one was installed. Using bolts instead of nuts makes installation much easier.

I asked François how long it took for him to figure out this method, and he said it was the first time they had to work on a C/4 at Chinetti Motors. The mechanics complained to the “Old Man,” and Chinetti Sr. told them to do whatever they had to do to make a carb service easier.