It was time for me to head south from Upstate New York to the Washington D.C. area to attend the first Radcliffe Motorcars/Tomyang.net Spring Event, but before the party, I had some visiting to do! Over the years, you may have read about a 500 Mondial that has been owned by Robert Phillips for 50 years. This car is undergoing a complete restoration to enter in the Pebble Beach Concours D’elegance in August. It’s the culmination of a lifetime of racing, driving, and hard work that will bring this car onto the lawn at Pebble Beach. Admiral Phillips invited me down to see his car in the midst of restoration, and I couldn’t pass up the opportunity!

The plan was to drive down to Maryland on a Thursday, drop my car off at Radcliffe Motorcars in Reistertown, MD, and pick up a Rental car to navigate through DC traffic. Jay Fontenella, a fellow NY Ferrari owner volunteered to ride shotgun in the 330 America for the ride down. The 390 mile trip down to Richard’s shop went without a hitch.

From there, we stayed at Michael Bayer’s house in D.C., and headed out to the Admiral’s workshop first thing in the morning. Bryan, his son and 365GT 2+2 owner, met us at his Father’s house. 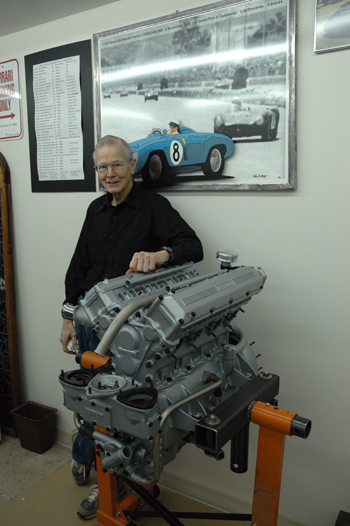 I’ve met the Admiral several occasions at other events and places, but this was the first time at his garage. The car was at another shop, but many of the mechanical pieces were being rebuilt in a small two car garage just across the Potomac from Washington D.C. Although this car had been raced, repaired, and rebuilt a couple of times before, this time around, the Admiral isn’t missing a single detail. The car is also worth significantly more than the purchase price of about $2000 dollars, so making everything right is worth the effort! 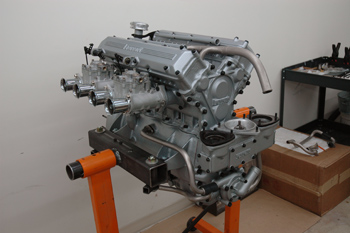 The engine has been rebuilt and  is just about ready for installation in the chassis. It was great opportunity to see all the details of this engine without them being obscured by the bodywork! I could have inspected all the details for hours!

If you know Ferrari history, these four cylinder Ferrari engines were designed to compete in a class where British 4 cylinder engines dominated. Using their knowledge in valve train technology and how to build a strong race V-12, they applied their efforts into creating a 4 cylinder engine that could beat the competition. 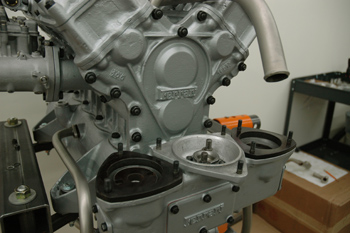 When the Admiral bought this car in 1958, she was a well worn race car, but he was determined to repair the damage and take her out racing. I can only imagine the wonderment of the guys at the navy yard hobby shop where the young lieutenant set up shop to fix his car! 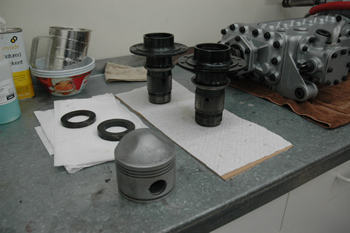 Every part of this car told a story. This piston was from an original set that was in the motor when Robert was racing it at Bridgehampton NY. At about turn 5 near the back uphill, the Admiral hit the brakes and clutch only to have both feet slip off the pedals and into the foot well. Oil had coated the pedals from the engine making it very hard to drive back to the paddock. On disassembly, it was discovered that the top ring land of the piston had started to distort. Blowby had increased, and started to spit out of the oil breather at the back of the engine (you can see the breather on the engine shot near Robert’s left elbow in the picture above). As the race progressed, oil found its way through the cracks and seams of the firewall, and coated the pedals. 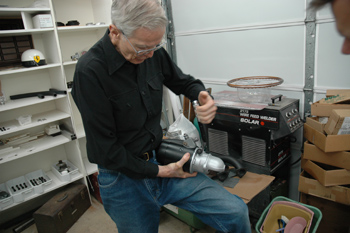 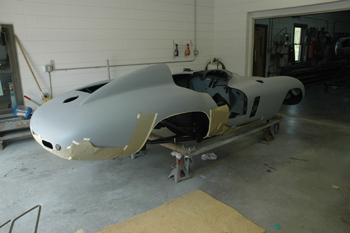 Next stop was Edinburg Virginia, a 90 minute drive out to David Carte’s Restoration shop. Those that are not familiar with David, he has restored and won at Pebble Beach with several Ferraris, along with other premier shows around the country. Robert Phillips has hired the skilled hands of Carte’s shop to undertake some of the Mondial restoration, and the body is just about ready for paint. 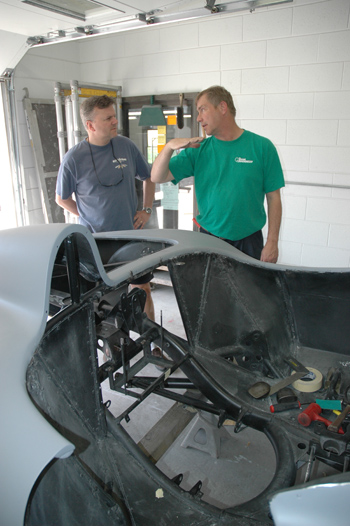 Bryan Phillips is seen here intently listening to David (in green) to some of the repairs they did on the car. 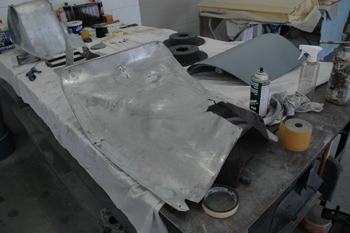 The Mondial was a race car, and there is a lot of evidence of a hasty repair done at a paddock somewhere in the world. This panel covered the transaxle, and holes were crudely cut in the aluminum to access oil fill holes and areas of the shift linkage. This panel will probably have to remade to make it look as it left the factory. 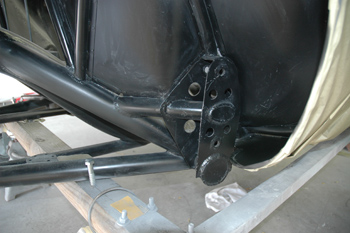 I was very fortunate to have access to this car before the restoration was complete. It will be great to see her done and on the lawn at Pebble Beach, but seeing all the details that will be covered with the shiny bits is what I love! 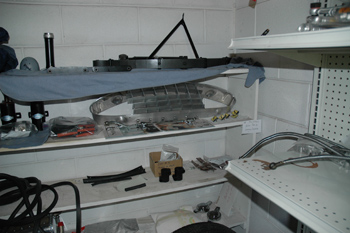 Even David’s shop had a shelf of parts that were waiting to go back on the car. The plan is to have all the pieces at all the different shops and garages to converge at Carte’s shop for final assembly. With three and a half months to go, it’s coming down to the wire! 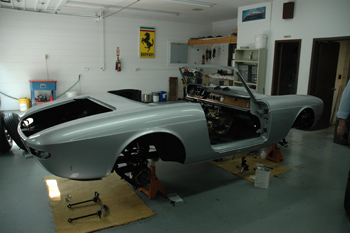 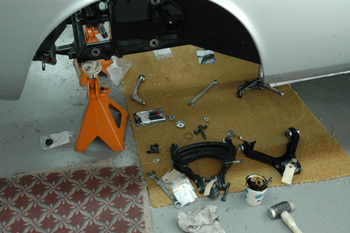 They’re completing the suspension rebuild and things are moving along nicely. 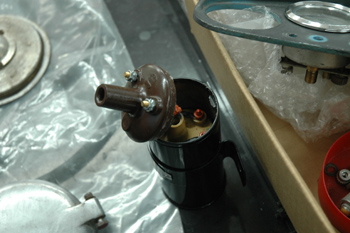 As Ferrari parts get older, and it becomes more and more difficult to restore parts and make them work as they left the factory. These are Marelli coils from the 50s that have a particular look that the judges look for at the top shows, but making the old coils work is sometimes impossible. David has found the solution by inserting a modern coil inside the old coil! When it’s all put back together, no one will ever know the difference. Clever and beautiful work David! Thanks for letting us in your shop, and giving us some insight to what it takes to win Pebble Beach! 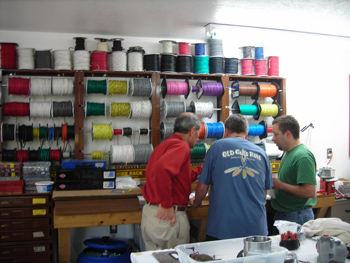 The next stop was to John Whittington’s shop in Woodstock Virginia. John used to work at David Carte’s but has recently set out on is own to focus some specific details in automotive restoration. John’s specialty is automotive wiring and specialized plating like nickel, black oxide, and gold cad. Here’s John (in green) showing Michael Bayer and Bryan some of his work. 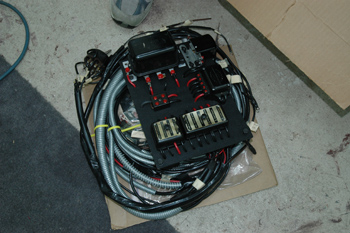 John fabricated the Mondial’s wiring harness by using the original one as a template. He has all the correct sheathing and connectors to replicate the harness exactly, so the results were beautiful. While I was visiting, he mentioned he has a spare 250 harness he made when copied one previously. All he needs is a circuit board from your car to transfer all the hardware to make a complete harness. If you’re interested, I can put you in touch with him! 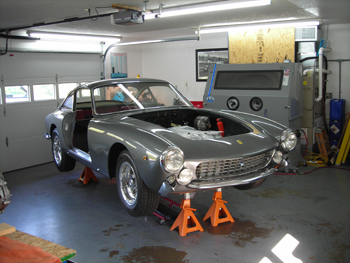 John has also taken on a Lusso halfway through a restoration. Some of the car will have to be done again because the previous work was not very good, but I believe she’s in good hands now. 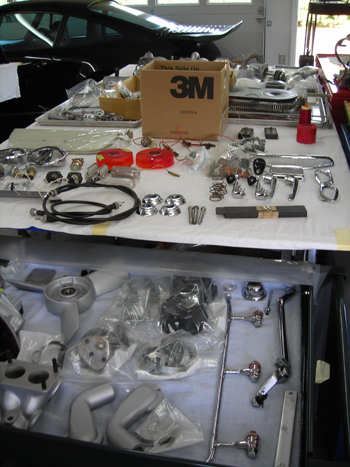 Hopefully none of the parts got lost in the transfer between shops. Good luck John!

We headed back to D.C. after a long day of looking at Ferrari parts. We were all exhausted, but we still had the Radcliffe Motorcars/Tomyang.net party to attend the next day. What a way to kick off the weekend in Washington!