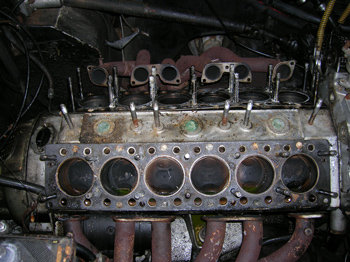 François managed to get the heads off Art’s 330 by the time I arrived for work today. Even after a supposed recent engine rebuild, the electrolytic corrosion on the head studs fought François all the way. 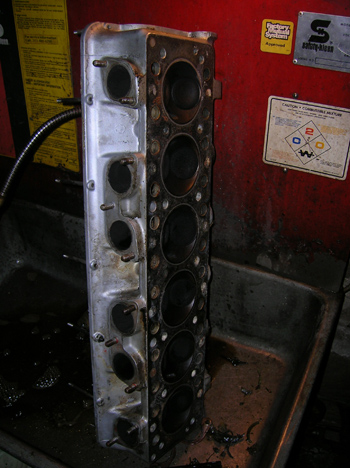 My job was to clean the oil off the heads, and get the valves off to inspect what was going on with this engine that would cause it to smoke. 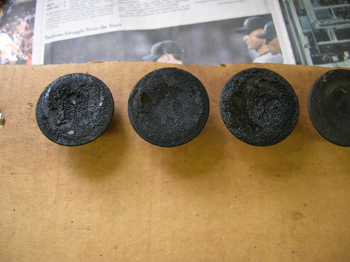 With the valves off, it was very obvious this engine was a smoker. Carbon deposits were everywhere. 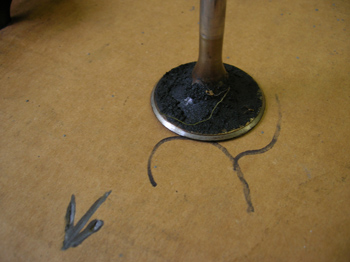 Art bought this car with a “fresh” engine rebuild, and put about 15K miles since then, but something wasn’t right. All the valves wiggled with excessive play in their guides, so oil was leaking past the valve stems and into the combustion chambers. 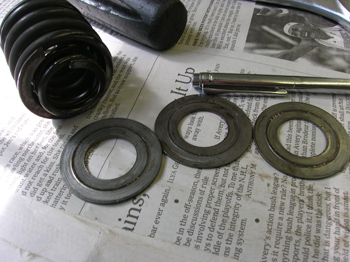 Small problems were discovered every step of the way. The shims used at the bottom of the valve springs were not OEM, and probably not as hard as the originals, so they showed excessive wear patterns from the dual coil valve springs. Small bits of metal would have been introduced into the oil every mile this car was driven. 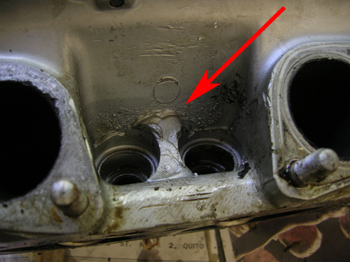 Not that this was a bad repair, but someone welded this head in its past. This clue would lead us to thoroughly inspect the repair and make sure it was done correctly. 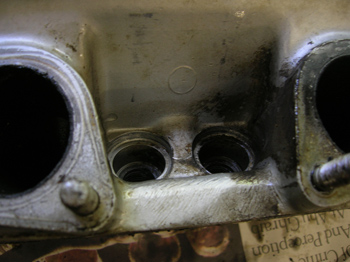 Here’s what a normal spark plug hole would look like. 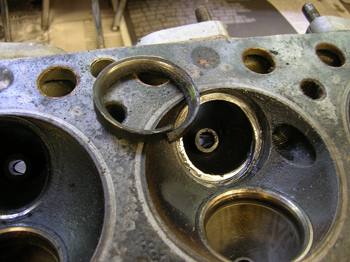 And now for the worst of it! The last time Art drove the car, he heard a bad noise coming from the engine compartment, and shut the car down. He had it towed to François’ shop, but when François started the engine, he didn’t hear any bad noises. There was a strange light tapping, and an occasional swishing noise, but we couldn’t recreate the noise Art described. François’ suggestion was to pull the valve covers and take a look. From there, we found the worn valve stems, so the heads had to come off. As I got to this exhaust valve, it became evident what Art heard. The valve seat had cracked and part of the seat was rattling against the valve! The force of the valve motion pushed the valve seat back into place, so when we were listening, we didn’t hear the rattling. With a light pry from a screwdriver, this seat fell right out of the head! At any speed of the engine, this dropped valve seat would have been catastrophic! 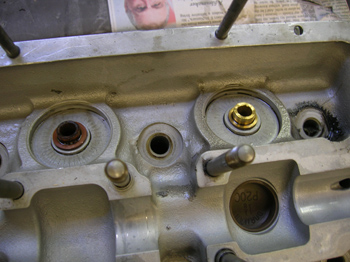 It was very obvious not all the valve guides were replaced during the last engine rebuild. The light colored one on the right is of the new material used in the modern guides, while the darker one on the left is probably the original ones installed by Ferrari. The old guides did not have seals at their tops, but all the guides, new and old, were machined to accept seals by the previous mechanic. 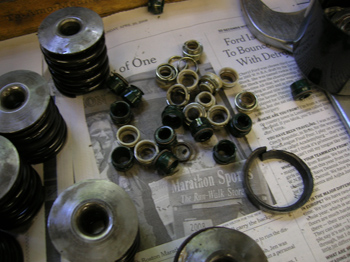 The seals were even a mix of two different brands.

With the evidence before us on the work performed on the heads of this 330 engine, we felt it would be best to at least check a couple pistons in this engine. Not to our surprise, the end gaps on the two pistons I pulled were beyond acceptable tolerances, not to mention the pistons themselves were out of round!? More on this engine next time!