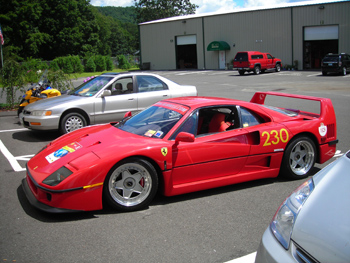 It’s been a while since I worked at Bill Pollard’s shop in Gaylordsville, but I stopped by to say hi. Sean was working on a F40 that was having a high boost miss, and asked if I wanted to go for a ride.  Answering a silly question, I quickly jumped into the passenger seat. As I was reaching around for the six point harness I felt something very hot on my forearm. The interior engine cover separating the passenger compartment from the twin turbo V-8 was removed for diagnosis, and Sean warned me about the hot coolant pipes just as my forearm was scorched! Ignoring the first degree burn, I strapped in and headed out.

Route 7 in Connecticut seems to get more and more crowded, even this far north of New York City. It didn’t help to have some road construction slowing things down even more with a police car waving the traffic by. As the traffic cleared,  I wondered if the cop heard the twin turbos spool up as we went around a bend! 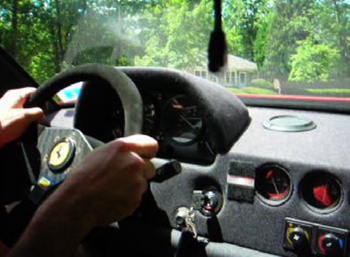 click on the picture
Unfortunately, the engine still needed tuning as we could hear some kind of miss when Sean applied power at wide open throttle. Even with the loss of power at WOT, the F40 was pretty fast. With only the time to shift 2nd and 3rd gear before slowing down in front of the local police, we were still well over any U.S. speed limit. The heat inside the cockpit, however, was nearly unbearable without the engine cover. The air seemed to come in though the large NACA ducts on the side of the car to cool the engine, but then all the hot air would dump into the passenger compartment.

As I climbed out of this kevlar oven, I marveled at the F40. For a 20 year old car, it was still a car to be reckoned with. On the street, it was truly a caged animal waiting to be let loose, and I got to experience some of the fury for the price of a little burn on my forearm!