The 500 Mondial at Pebble Beach 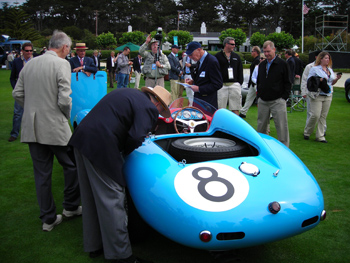 The big story at Pebble Beach for me was watching Admiral Robert Phillips present his 500 Mondial to the public after 40 years of dormancy. The Admiral (in the light jacket) waited for the judges to scrutinize  his car. David Carte (hands in pockets) worked with Robert to get this car to this level of restoration, and watched from the side. 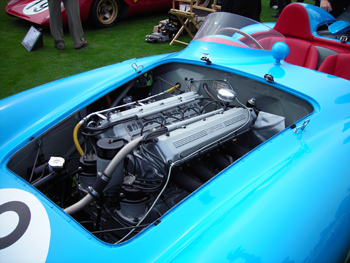 If you follow this website, then you’ll know all about how the Admiral found this car in 1960, raced it in club racing as a young Navy man, and parked it in 1968. The Mondial saw many moves through the years, but had not moved under its own power until just a few weeks ago. The results of Carte’s shop and the Admiral’s hard work brought this car to Pebble Beach. Just the invitation to show this car at the biggest event in the Country was an honor, but the accolades were still coming in! 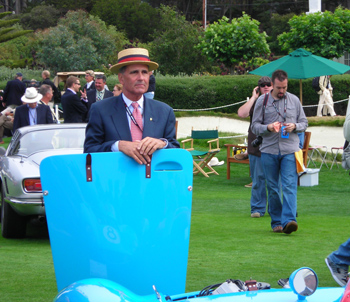 The support crew was ready to help the Admiral through the process of judging. Michael Bayer got his hands dirty on this car as well, and joined the Phillips family in the tension of presenting the car! 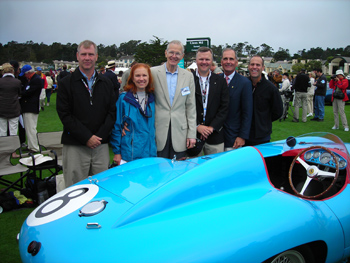 It was obvious the competition was fierce, with spectacular cars placed in the same class. Getting the car to the lawn was quite an accomplishment, and everyone was elated to be here. 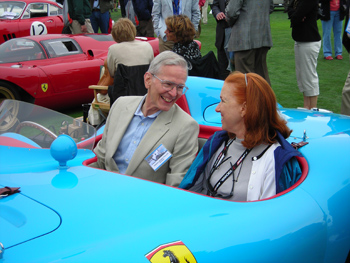 As the judges called up the first three places in class, Robert and his wife were asked to join the other cars at the reviewing stand. Mrs. Phillips later told me that after nearly 50 years of ownership, this was the first time she rode in the car. All the other chances to ride in it, the Mondial was a dirty smelly race car! 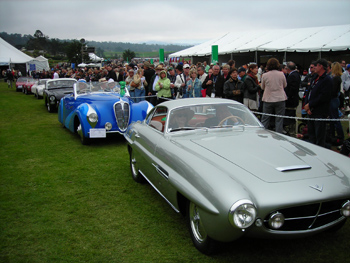 Team Phillips was made up of friends and family, and we joined the procession of winning show cars to the reviewing stand. The Mondial was suffering from a worn out clutch mechanism from trying participate in the Pebble Beach Tour. Keeping her to any speed short of flat out was not part of her design, so by the time Sunday rolled around, the clutch only had a couple engagements left. The thought was to push her as close to the reviewing stand, and allow the Admiral to slip the clutch one last time up the ramp to receive her award under the Mondial’s own power! 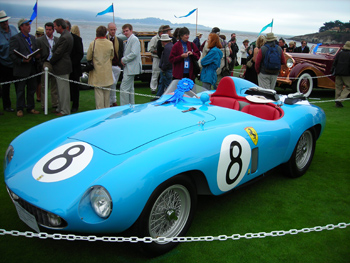 As the Phillips’ reached the top of the ramp, they were not only awarded best in class, but also best Ferrari at Pebble Beach. We were all teary eyed when we heard the news. 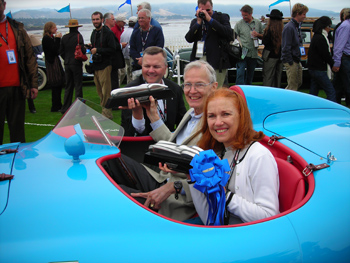 Pictured here with their son Bryan, the Phillips shared a moment that was monumental to any car owner. Not only to be recognized by the Pebble Beach Judges, but to have owned this car for nearly 50 years, fixed her, raced her, restored her, showed her, and won in her by the same family is not something that happens often. Congratulations!