Monterey Wrap Up, and Getting Ready for Goodwood

8/20/08
Monterey Wrap Up and Getting Ready for Goodwood

I was so involved with the Phillips’ family with their double trophy win at Pebble Beach, I failed to write about other cars. As usual, there were plenty of interesting cars out on the show field. 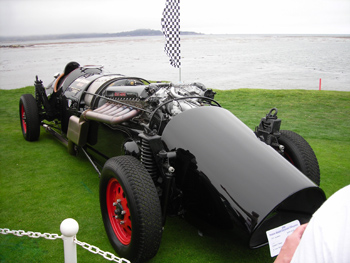 Something you don’t see everyday was this 1953 Swandean Spitfire Special. 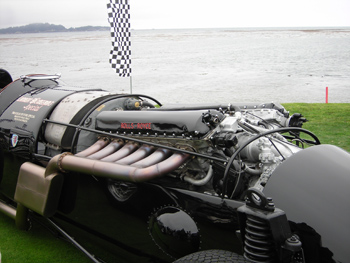 Imagine 1600 horsepower at 3000 rpm in this beast. My research shows that in 3rd gear this car attained 150 mph with another gear to go!

I met some old friends and made some new ones on the lawn at Pebble Beach. Chris LaPorte and his family won a 1st in the Post War Preservation Class with his 410 Super America. I met Chris and his wife at Cavallino, and it was great to catch up with them again. A new friend I made was Steve Katzman with his 1955 Lancia Aurelia B24 Spyder which won a second place in the same preservation class. Steve, like Chris, owned his car for many years, and lovingly preserved his car without a full restoration. I was pleasantly surprised when Chris came up to me to introduce himself and tell me how much he enjoyed my website. Keep up the great work Chris!

I managed to find just enough energy to watch the Gooding auction before heading north in Tom’s 330GTS. On the drive down, we noticed the ammeter showing an over charge situation. The battery was also showing the signs of a slight overcharge, so there was just enough tension in the car for the drive home! 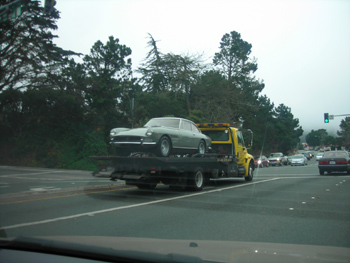 We certainly did want to end up like this Series II 330GT 2+2 photographed in Pacific Grove. We nervously laughed at the prospect of finding a AAA tow home on Sunday night after the Monterey weekend. Tom and I breathed a sigh of relief when we reached the San Jose area, and Tom parked his car in his garage. We made the round trip in a VIntage Ferrari without incident, and it will be a trip I will always remember fondly!

So now that I’m back, it’s time to prepare for the next event: The Goodwood Revival! I figure the the exchange rate at two dollars to the English pound, what a better time to go! (ha ha)

If you’re not familiar with the Goodwood Revival, it’s an annual gathering of enthusiasts held on an estate in the South of England. It’s a celebration of cars and built in the 60s and earlier, along with aviation from about the Second World War. The spectators are requested to dress in period clothing, so I managed to do some shopping earlier this Summer. Ian Levy, a 365GTC/4 owner in Birmingham sent me a Harris Tweed cap to start me off, and told me a pair of “plus fours” and some argyle socks would compliment the cap. I don’t know if I can be so daring in my wardrobe, but this is what I’ve pulled together so far. Don’t laugh! 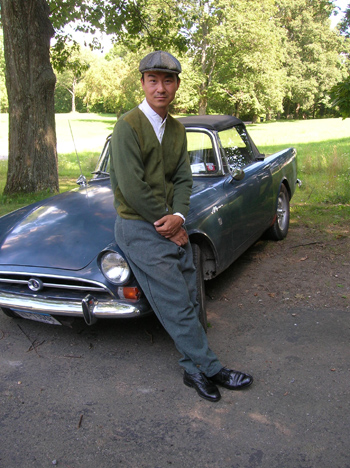 I wanted to shoot for a 40s look, so the colors were a little more subdued. The pants are riding pants and can be tucked into a pair of riding boots, but I may bring a pair of wellies for the wet English Countryside. There’s still a few weeks until I leave for England, so I might look some more. Another popular look is W.W.II military attire. If I can represent the America with a US dress uniform, that would be great.

I know a handful of people in the U.K. who will be attending, so if anyone has a suggestion of a place and time on Saturday, I would love to meet. I’ll be there Friday to Sunday, but may be spending some time traveling on Friday to get settled in. See you there!