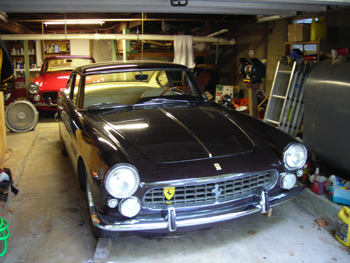 Last week, Michael Greenspan was headed to Rhinebeck Aerodrome to meet a bunch of Ferrari owners for a day out in his 330 America, but a brake failure meant a tow to my house instead. Originally, the plan was to have the car transferred to François’ shop for the repairs, but he was too busy preparing a car for the Rolex Vintage Festival at Lime Rock. I explained the issue, and the Frenchman assured me there would be no problem in my handling the repair. 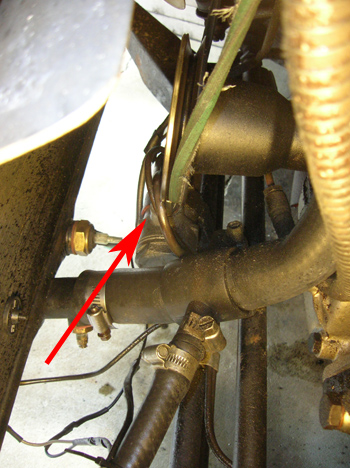 The nut on the lower pulley worked itself loose and fell out, causing the pulley to slide off the crankshaft and into a brake line. The large headed nut is held in place with a lock tab washer that probably broke. With an extra bolt from François’ stash of parts, I used loctite to secure the bolt to prevent this from happening again. 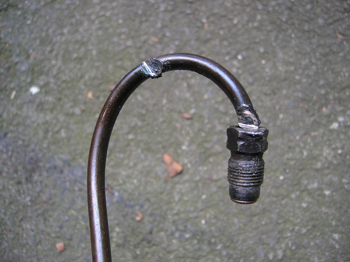 Not only did Michael manage to safely stop the car without brakes, he also stopped before the loose pulley managed to do more damage. Only one line was cut and I was able to save the fitting for the replacement line. 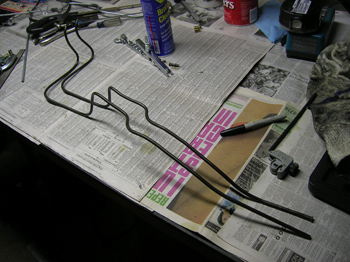 Ferrari brake lines are bent pretty crudely. If you try to do it only with a fancy tube bender, you’ll never mimic the bends found in original lines. I’ve found a combination of a tube bender, and the shape of my thumbs makes for exact replica bends! 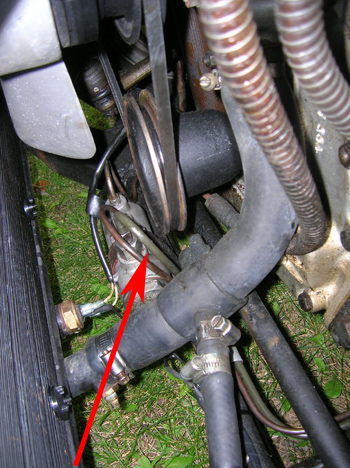 I used coated 1/4 inch brake lines for the replacements. It has a darker color, and blended in better than the normal shiny steel lines. If I were doing a concours car, steel lines would have to sent out for copper plating before bending them up. I was pretty happy when the new lines lined up perfectly. With a new bolt, belt, and brake line, 4969 was back in business. 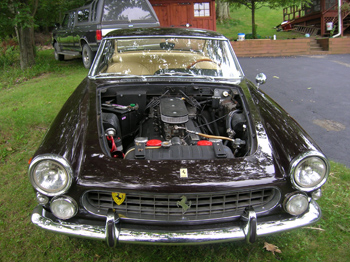 Michael had a couple other things on his list of “to-dos,” and I felt I could do some without taking too long to complete. Since access to the lower pulley bolt was easier with the radiator out of the car,  it was removed and pressure tested for leaks and boiled out. 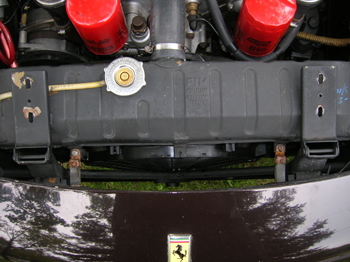 An electric fan was previously installed, but didn’t seem to be up to the task of cooling the car in heavy traffic, but I found a good solution for my car. A 16 inch Flex-a-Lite Trimline Model 116 just fits in the confined space between the radiator and the front cross member. It’s so tight, the fan has to be hung in place before the radiator is installed. I tried other models, and they won’t fit, but this one works great. Hopefully, this will give Michael the confidence to drive in any kind of heat! 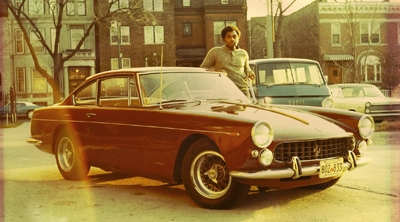 Speaking of 330 Americas, Sandford Brawley, a previous owner of my 330 America sent me this picture he found when he owned my car in the 70s. Pretty cool! Someday, I’m going to repaint my car that original color!