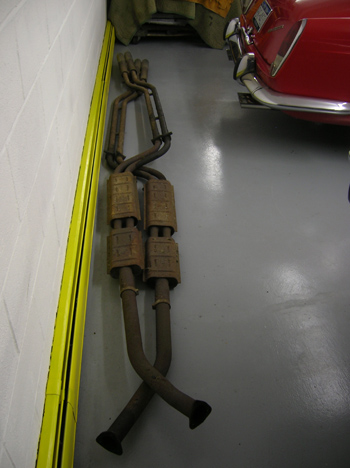 I started the day by pulling the exhaust on PF Coupe 1747. In order to pull the gas tank on this car, the rear portion of the exhaust needed to be moved. On some cars, the exhaust hangers can be removed, and the rear exhaust can be tied up to make room for the tank, but this was not going to happen with this car. Luckily nothing was too rusty, so I managed to get the exhaust down without too much difficulty. 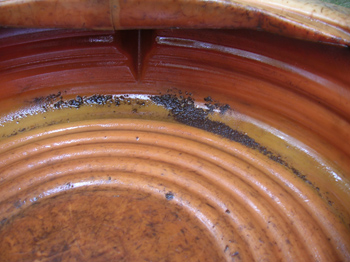 The justification to pull the gas tank was proven by what was found at the bottom of the drain pan. With each never ending panful of gasoline, I found more sediment. Cleaning, descaling, and coating the tank will insure none of this crap gets into the newly refurbished fuel system. 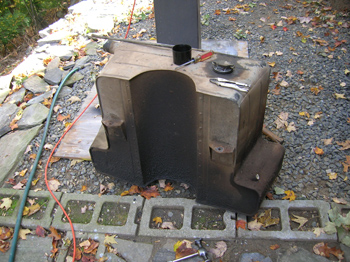 I don’t think this tank has ever been out of this car in nearly 50 years, so it was due for an inspection and cleaning. I was really lucky on this one, and although I was covered in dirt and debris, none of the mounting bolts were seized. 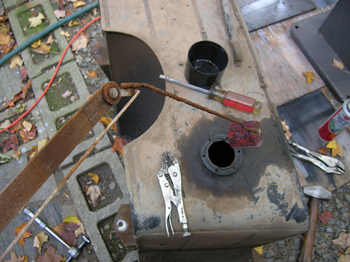 The sender unit gave up a good fight, but I got all the screws out with a combination of an impact screw driver, and some vice grips. I’m sure the scaly rust on the sender arm was also falling into bottom of the tank. 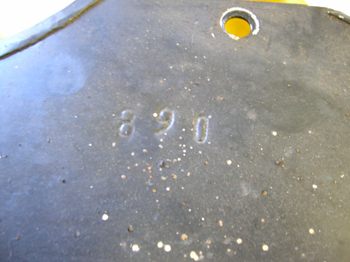 I found PF number 890 stamped on this plate mounted below the battery tray. I guess the people at Pininfarina were not too careful using all the correct parts stamped for this car! 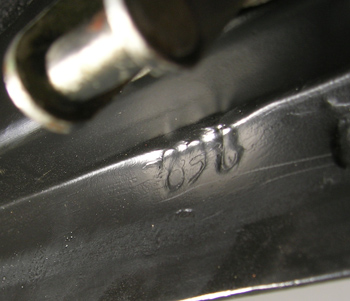 I found this one on the trunk lid by the latch. Want to take a guess what this one reads? 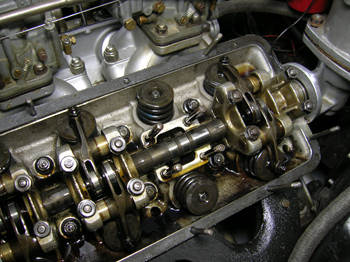 After putting full day in on the PF coupe, I turned my attention to my 330 America. As I said from last time, I did not find anything drastically wrong with my valvetrain, so I began checking valve clearance, beginning with cylinders 1-6. As I turned the engine over to set valve lash, François came over, and spotted my problem on the other side of the motor on Cylinder #8. There was excessive valve lash on the exhaust valve, so we removed the rocker stand to take a closer look. François mounted a spring compressor on the exhaust valve and confirmed it was not stuck in the guide. The next step was to do a leak down on that cylinder.

Our fears were confirmed with 100% leakage in that cylinder with both valves closed. Listening to the exhaust pipe, we could hear the disheartening hiss past the valve seat. Something was not allowing the exhaust valve from fully seating in the head, and the only solution is to pull the head off the engine….

I guess the bright side of all this is I know how to do all this work myself, and I have François for guidance. The bad news is I’ll have to buy a Ferrari head gasket ($$), and probably machine a new valve seat. The decision I’ll have to make is whether I do all the valve seats while I’m in there. I guess it could have been worse with the seat falling completely out, and ruining the cylinder head and piston. Can you sense I’m trying to stay positive?