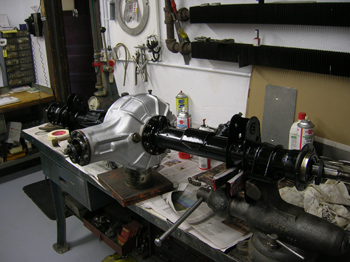 François and Alvin were busy the day I was away from the shop, by checking, sealing, reassembling, and detailing the PF Coupe’s rear differential. It’s a marked improvement from a couple days ago. 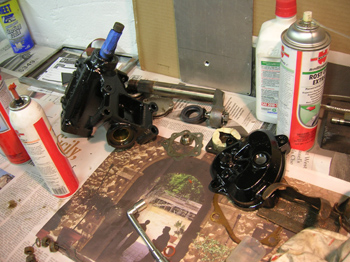 The steering box was also disassembled and serviced. François reported it to be in perfect shape with hardly any wear. With new seals, this box should be good to go. 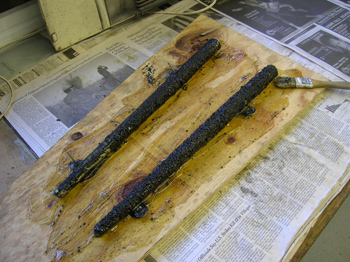 Alvin was busy stripping the spark plug tubes, getting them ready for new wrinkle paint. 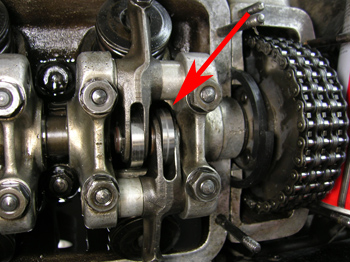 I worked on the valve train today, cleaning and inspecting. One of the roller followers showed a wear stripe that needed addressing. I disassembled the rocker assembly, pulled the one follower and dressed the surface of the roller smooth. The matching lobe to the cam was in good condition, so we didn’t have to go any further. After the roller was fixed, I reassembled everything, replaced 7 worn tappets and did a valve adjustment.

François and I fixed a nasty oil leak between the head and the front timing chest. François’ fix saved us from pulling the heads off as many shops do when confronted with this type of leak. Thanks to old timer Ferrari tricks, we didn’t have to! 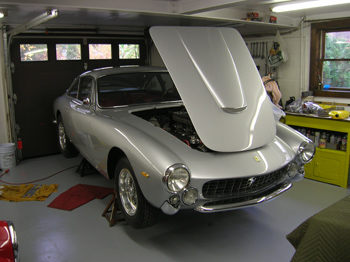 You would think that all I’ve been working on was the PF Coupe, but we just got a Lusso in for some servicing. 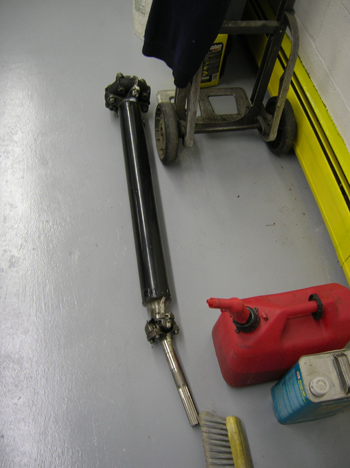 The first order of business was to remove the driveshaft to have it balanced. The owner says there’s a vibration at about 80mph. Sending the whole driveshaft unit out to be balanced hopefully will cure the problem. 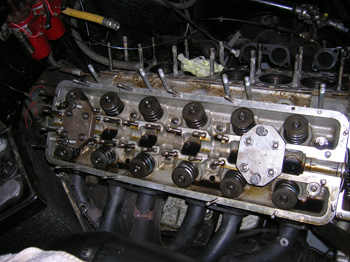 At the end of the day I spend some more time on my Ferrari. After everything was unbolted, the second head was still stuck to the block. Even after applying grease to the studs the last time this head was removed, the head was still holding fast to the head studs. François had a pair of factory head puller plates to help pull the heads. They attached to the rocker stand studs and pushed against the head studs. Since this head was not as badly stuck as a head that’s never been apart, I didn’t need a full length head puller plate to pull this head off. Care was still taken to insure the head was coming up straight, but after some time and patience, it eventually came off.

I’ve got a machine shop lined up to install new seats, and I hope to be able to do a full report. Stay tuned!