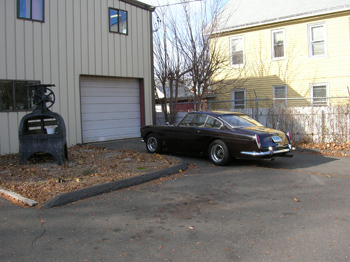 I took a ride out to New Britain, Connecticut to meet Michael Greenspan at ERA Replica Automobiles. Michael’s other “fun” car is an ERA Cobra, and the guys at ERA often help Michael out with Ferrari projects for his 330 America. We had three projects to run by the guys at ERA, a radiator belly pan, a vent knob, and some tow hooks. 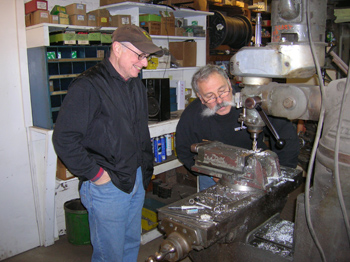 Michael (left) and Peter (right) started on the knob by fabricating it out of a piece of aluminum on the Bridgeport milling machine. Although the original piece was black plastic, it was easier to make it out of aluminum in the metal shop! 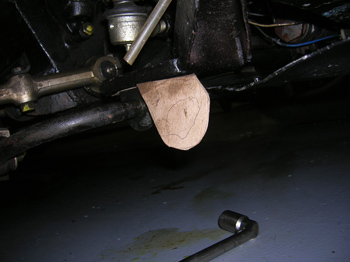 A couple of weeks ago, when I pulled off the radiator pan to lend to Michael, I took a closer look under the car. With the pan installed, most of the attaching points for towing are covered up. I never feel good when the Ferrari gets towed and the driver peeks under the front of the car with that big steel hook. I mocked up some brackets for my car, and told Michael about them. Since he was having a pan made for his car, he would soon have the same problem, so he offered to ask Peter at ERA if we could come down and use some of the tools at his Fab shop. He generously agreed, and I got down to work. 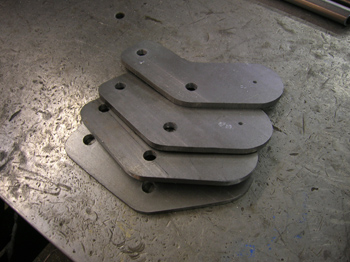 Teddy, ERA’s chief fabricator, made the first one and let me copy his steps with the other three. With a band saw, drill press, belt sander, and torch, we had two sets made in a couple hours. People forget that you don’t need fancy machinery to make beautiful bracketry, just standard power tools and good guidance. 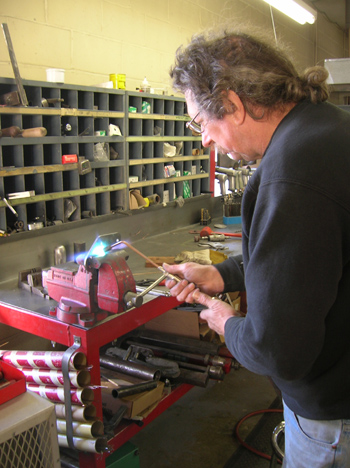 Originally I wanted to make a 90 degree bend in the brackets, but after looking at the ground clearance Teddy decided only a small bend was needed. With quarter inch steel, it still needed a torch, a lot of heat, and some hammering to get the bend we needed, but Teddy got the job done. 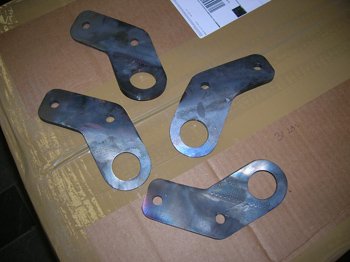 These brackets turned out real nicely, and we all decided they would look a lot better powder coated. Normally, they should be painted yellow or orange so they can be easily seen, but black would hide much better under the car. 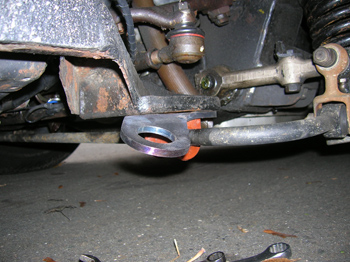 I mounted a finished one on Michael’s car, and the fit was great. 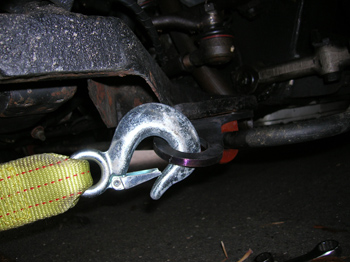 There’s plenty of clearance for a tow hook, and even though it’s not stock, I think will make a very useful addition to any Vintage Ferrari. If anyone wants one for their car, I can look into having several made up.