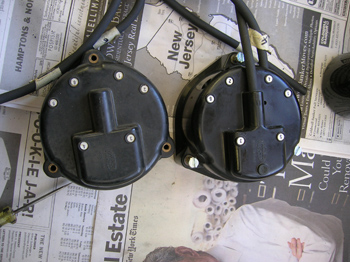 I finally got to go back to work after a crazy couple of weeks at home. I continued the work on the ignition system by attaching the spark plug cables. As I started connecting the wires, something didn’t seem right with the number labels. The Marelli distributor caps have numbers that mark the firing order of the distributor, not the firing order of the engine, but these caps had another problem. Number one spark plug on the distributor was off by one position, so when we were replacing the wires, there was some confusion. 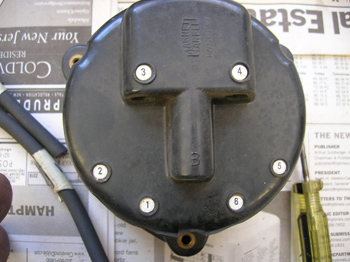 Looking at an original distributor, with its numbers intact, we spotted the mistake, and the potential of following the wrong markings. With the correct labels, we could then connect the ignition wires to their proper positions. Working on the right bank of cylinders (treating a Ferrari engine as two six cylinder engines when timing the ignition system), the position on the distributor goes to the #1 cylinder, the second position on the distributor goes to #5 cylinder. Completing the right bank firing order of 1-5-3-6-2-4. The left bank is wired 7-11-9-12-8-10. It can be confusing, but makes more sense when you have things laid out. I found it easier to deal with each side using the 1-6 firing order and transposing that order to the left bank making # 7, # 1 in my head. Have I made it more confusing? I know I occasionally have to stop to think about it again just to keep things straight. 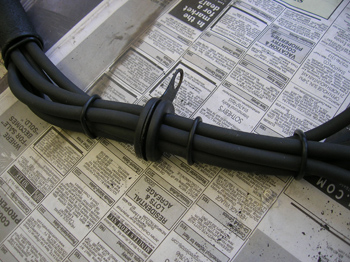 Here’s the picture of the cable keeper I promised. It’s a simple flat piece of sheet metal, stamped with two holes, one for the distributor bolt, and the other larger one for the ignition wires and the large rubber grommet. These clips are often cut to change the ignition wires with the cut hidden under the rubber grommet, but the wires are supposed to be fed through the large hole of the metal keeper. 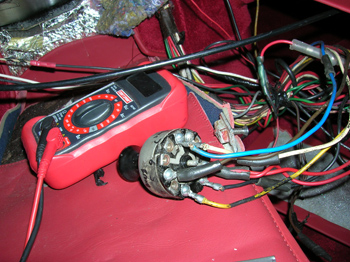 When the upholstery was done on the this car, the switches were removed from the center console, but or some reason, the upholsterer unplugged the wiper switch. After several months of leather work, his notes were misplaced, but luckily I had a wiring diagram for this switch. Even with a Lucas wiring diagram, I’m never 100% confident that these British switches and wiper motors will work, so you can imagine my relief when the wipers started working again! 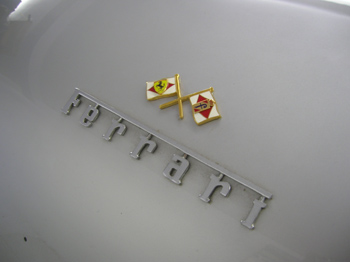 Black Bart, our emblem supplier sent us a new “FD/30” crossed flag emblem for 3553. The posts fit perfectly in the original holes, but I won’t be mounting these flags permanently until we get a chance to detail the paint on the car. It will be much easier to buff and polish the paint without the emblems in place.