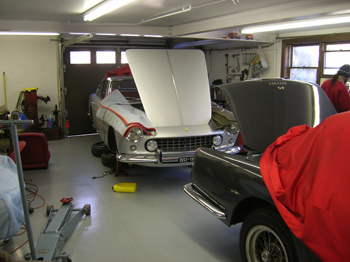 I’ve been very busy and productive at François’ shop the last couple of days. Gary’s GTE is back from Cavallino with a list of things we want done before he takes the car home for Spring. The PF Coupe is getting very close to mechanical completion as well. 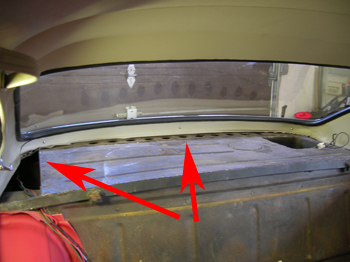 One complaint Gary had while driving his car in Florida was the smell of exhaust fumes inside the car when the windows were open. GTEs have a  low pressure area in the back of the car, and exhaust gases can get drawn back into the cabin. I managed to eliminate a gas smell by better sealing the fuel tank, but the exhaust smell was going to take a little more work. On a short drive, we found no exhaust smell with the windows up, but I guess the pressure differential changes with with windows open. I checked the trunk seal to make sure there were no leaks, but to make doubly sure these smells didn’t make it into the passenger compartment, I decided to seal the trunk from cabin. Under the rear window, there are a bunch of open areas that led directly to the trunk. 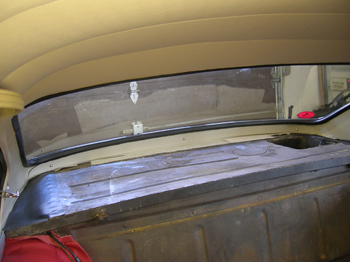 Using some black vinyl, I glued them to the back panel. Now the trunk is isolated from the passenger compartment. 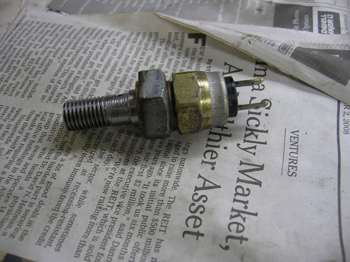 I replaced the brake light pressure switch that failed on us at Cavallino. With a new one installed and brakes bled, we have brake lights again. 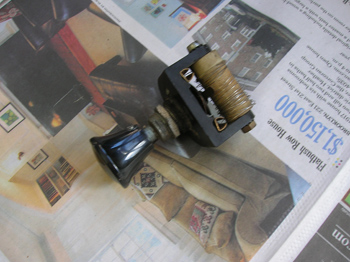 Another thing on the list was the instrument lights. They seemed to stay on all the time and with one look at the switch, it became obvious what the problem was. The resistance wire had come undone, and was not allowing the switch to work properly. The old wire probably got caught on the blade of the switch, and became unraveled. 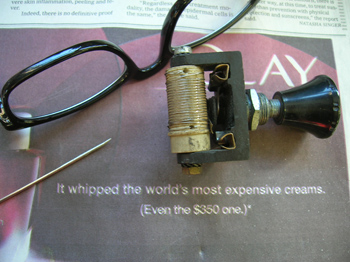 With some careful soldering, and rewrapping of the wire, I managed to get it all back neatly in place. Yes, those are my reading glasses. I can’t do this kind of detail work without them anymore!!! 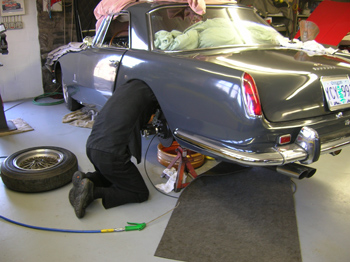 With Gary’s car back on the ground and mobile, we turned our attention to David’s PF Coupe. I was excited to hear this car start up, so I began filling the tank with some fuel. Unfortunately, leaks were found near the fuel filter and electric pump. Some of the leaks were solved with just a little more tightening of the fittings, but one pesky leak soaked my sleeve and shirt in the wonderful smell of gasoline. I tried first replacing the sealing washers, but another set gave the same leaky results. Eventually, François and I tried together to stem the dribble of gasoline and found something that worked. Unfortunately, I had to endure the smell of gasoline on my clothes for the rest of the day. (So you want to work on Ferraris for a living?…) 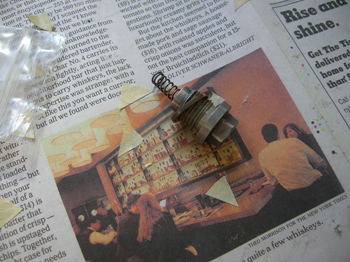 John at Quantum Mechanics sent me the spare pressure valve plug for the PF Coupe’s Overdrive unit, and it fit perfectly. He advised I run the overdrive with the plug out to flush any trash out of the system before plugging things up for good. The small orifices that the oil passes through can be easily clogged, so flushing the system insured a working overdrive. 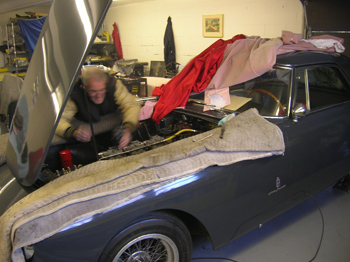 We moved the PF Coupe by the door, and fired her up. François got to work tweaking the carbs and the timing to get the car to run perfectly. When he took a break, I flushed the overdrive with gear oil just as John had described. With everything plugged up, I put the car in top gear while it was on jack stands, and tested the overdrive. It worked perfectly! We’re still waiting for the brake booster to come back from the rebuilders, but I can’t wait to take this car out for a test drive!