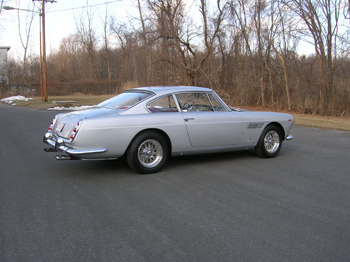 Gary’s Ferrari 250GTE came back from Cavallino empty handed, but I obtained the score sheets to see where we could improve. I’ve struggled for a few days on how to write this post, as it is very hard to decipher it without sounding like a sore loser. I’m very proud of our achievement of 89-1/2 points at a show considered to be one of the hardest in the country, but as always, some of the point deductions were questionable. 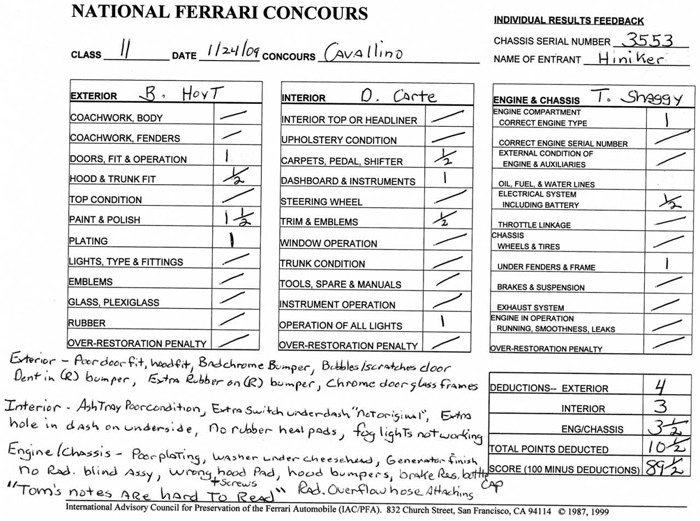 David Carte was the Head Judge in our class, and collated the scores from his and the two other judges. The comments from each judge was added to the score sheet.

Some of the points were totally my fault, with a mysterious electrical short of the fog light circuit that kept blowing fuses. All electrical circuits were tested and re-tested before the car was sent to Florida, so we had some bad luck. We were missing a radiator blind, which has not been sourced (Hmm. do you think Shaughnessy has one?), and the heel pad was left off the carpets when the upholsterer sewed the carpets. TOm S. has not responded yet about his scoring, but David Carte spent some time with me discussing the car, Tom’s, and his scores.

Now what would have brought home a trophy? Here’s David’s explanation on how it works:

The way the scoring works is 95 or better gets Platinum. Any car better than 95 or better. There is only one Gold award that is 90 or better so if a car score 94 he gets the Gold and only one silver award . Car must score at least 85 to qualify for the silver. “hypothetical”=So if in the class you had a couple 95 or better they all get Platinum and you have one at 94 and one at 93 and one at 92 the awards go as follows the 94 gets the one Gold award and the 93 gets the one Silver and the 92 is shut out . That is the way Ed has it.  So the goal is 95. If you score 95 you always get an award.  Anything less is a crap shoot. Hope that helps. Another team of judges could well score the same car a few points higher or a few lower. Just depends on how strict the guys are.  You know what you have to do to get the car to score better.  Best of luck with the next event.

With that description, we were contenders, but another car must have scored better.

We’re already improving the car if Gary chooses to show the car again, and the score sheet gives us a good guideline to follow. I first thought having some of the most knowledgeable judges working in our class was going to be disaster, but having such harsh critics only makes us want to achieve more. My job is to try to get a higher score with an eye towards value. There is room for improvement in the Interior, and Engine/Chassis areas of judging that can be fixed, but getting the 4 points back from Mr. Hoyt’s determination (which I can dispute) can easily exceed $60K for new paint and chrome! Where do you think I would put my money?

At this level of show cars, it is often easier to start with a ground up restoration. Starting from square one insures everything is plated correctly, finished well, and massaged to perfection. This direction gives American restorers and show cars the reputation of being “over restored.” As the owners of some of these cars demand a podium finish, it leaves the restoration shop very little choice. We took Gary’s car, which was freshened up by another shop, and corrected many of the things that would have never brought us close to such a score.

The owner and I learned a lot from this experience, and I’m fortunate to have had the opportunity. Considering Gary was going to take the car to Cavallino for display only, having 3553 judged, showed us how close we were were to an award winning car in the eyes of the critics. It also gave me some great insight to the individuals and practices of this level of Concours Judging. I look forward to doing it again.