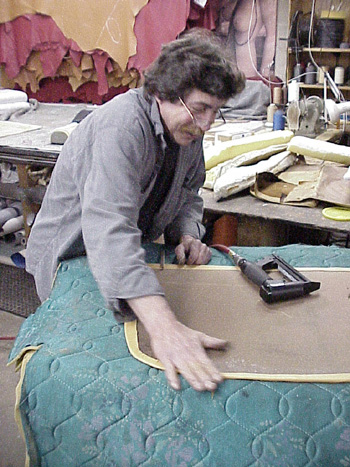 I got a call today from Gina to tell me that her Father Frank Segreto passed away this morning. Frank was the upholsterer that helped me with the interior of my 330 America, and showed me a lot of the skills I now have working on Ferrari Interiors. Frank lived his life pretty hard that he didn’t leave much for the end of it. He suffered from emphysema and a host of heart problems that left him incapacitated from any work for the last couple of years. He was a good friend, and my thoughts go out to his daughter Gina and his son Jay. I’m going to miss him.

François introduced me to Frank shortly after I bought my 330 America project in 1999, and I began negotiating how I could restore my interior on a budget. Frank casually agreed to help me, but I wasn’t sure if he would ever begin working on my car if it was on his spare time. As the years passed, and I got closer and closer to completing the mechanicals on my car, I tried to pressure Frank to get started on my interior. Finally, out of exasperation, I told him I was going to show up at his shop, and do whatever he wanted me to do to free him up for my interior! I straightened out a corner of his shop for my seats, and set up a work space. Since everything was set up, he showed my how to begin the disassembly process. After each step, Frank would come over and show me the next step. I spent a year of my “Ferrari Fridays” going to New Rochelle to work on my interior, and the results were fantastic.

During that time, Frank and I became good friends, and he showed me a lot about his craft. He raised his kids very much like the rest of our parents, telling them to go to school and keep their hands clean, so no one came down to the shop to learn what their old man could do. When Frank got sick, his business all but shut down. I helped him send out the last couple of jobs, but he stopped running his shop for the last three years.

I treasure the time I spent with Frank, and the knowledge I gained from working with him. It’s a shame I couldn’t have learned more, but what I did learn, I’ll never forget. Thanks Frank.