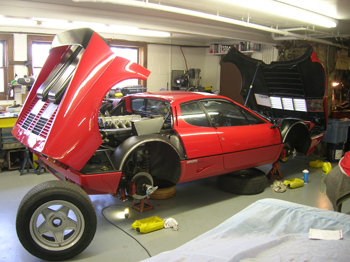 A 1983 512BBi came into the shop today. Even though it’s a 26 year old car, it’s practically a new car to me considering what I’m used to working on! The owner has been trying to get this car into our shop for several months, and we had a slot this week. The car came in with a laundry list of things he’d like done, so I began with a fluid change.

I like Boxers, and having one opened up like this always reminds me a of a jack knife. 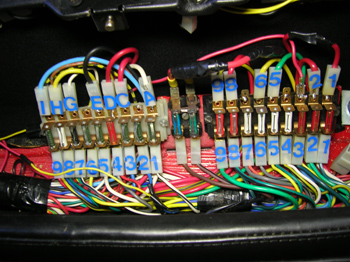 One thing I’m not crazy about however, is the wiring on these cars. During the late 70s and early 80s, Ferrari used a fuse panel that had riveted connections to the panel. Through the years of heat, corrosion, and wear, these rivets would loosen, and cause more and more heat from poor connections. Eventually, these connections would overheat, melt, and quit working. A couple items on the owner’s list was a complaint that the engine mysteriously cut off and smoke coming from the fuse panel. These two items may be related, so I took a closer look at the fuse panel.

From the labels, I could see someone had their hands inside this panel before. The previous repair shows soldering of most of the rivets on the fuse panel, and a connection wrapped in electrical tape. These two repairs may have been done by two different shops, or at least two different people because the quality didn’t match! The soldering looked good, and seems to making a good connection, but the wires left something to be desired! 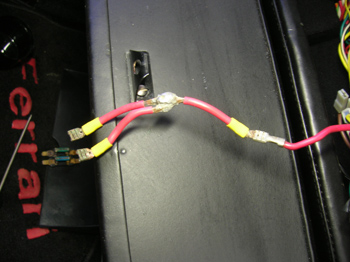 Peeling back the electrical tape, I found crimp connectors, and a lot of corrosion. I hate crimp connectors. They are commonly used, but looking at these connectors proved why all connections should be soldered. Every crimp connector showed corrosion and heat build up from high resistance. One spade connector was so overheated that it was loose at the terminal block. This junction may have been the source of the smoke. The repairs of this Boxer fuse panel began with soldering these connections. I’m not exactly sure why there was a “Y” in the fuse panel, since this would not have been done by the factory, but I would have to look at an original fuse panel to see how it’s supposed to be. 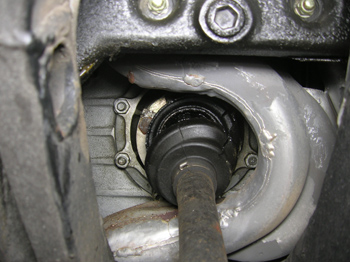 One thing that was not on the list but had to be addressed, was a torn rubber boot on one of the half shafts. Boxers half shafts connect to the transaxle near the exhaust headers, so the inside rubber boot has to withstand some extreme heat. Street boxers have exhaust shielding to help lessen the heat, but these boots still crack. With the boots gone, dirt and heat continues the damage by contaminating and cooking the exposed grease, destroying the lubrications and eventually ruining the constant velocity joint. 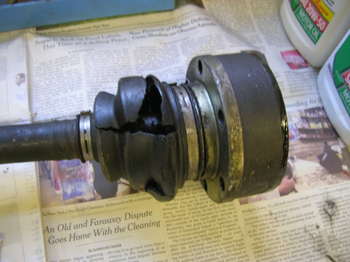 With the half shaft out, you can see how badly the boot was cracked. The rubber was rock hard so it’s no wonder it failed. Luckily the grease inside was still there, so we don’t think the CV joint was damaged. Once the boot was removed, I washed out all the old grease and waited for the new boot to arrive in the mail. 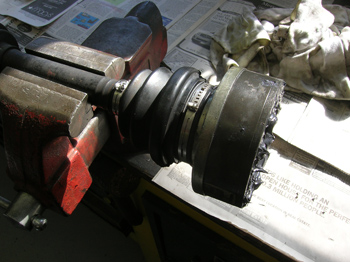 With new grease, boot, and clamps, the halfshft was ready to back in the car. A major problem was easily avoided.