I got a call from my friend Mike to go and see a car he just bought. The last bit of winter has not left the northeast, so Mike had the car delivered to Radcliffe Motorcars, the location of the May party. I could use some “face time” with Richard about the upcoming party, so I jumped at the chance to tag along. 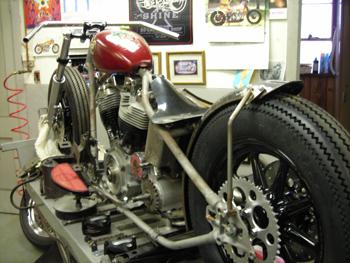 The first stop was Rollin’ Bones in Binghamton, NY, a custom Motorcycle shop that has been featured in some national magazines. Mike had some chopper parts laying around his garage and had sold them through the bike shop. 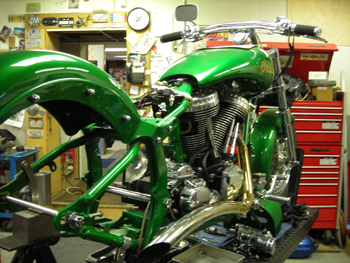 Although I’m not a biker, I can really appreciate the craftsmanship. 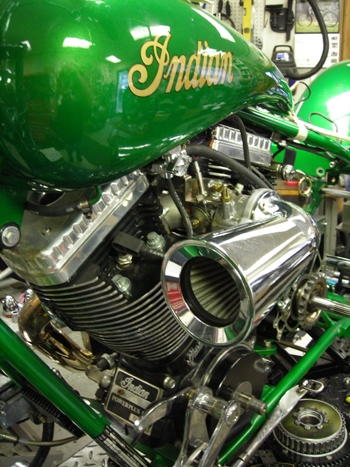 A neat thing about these kind of bikes is the mechanicals are usually left exposed for the world to see. There’s always a lot for my eyes to explore. 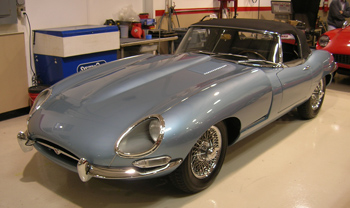 In Maryland, we saw Mike’s new car for the first time. He was looking for a decent driver, but this car was more than that. The engine compartment was nicely detailed, the interior was new, and the paint was fresh and presentable. This car was ready for spring cruises and local show-n-shines. Now all we need is some dry weather to bring this girl home! 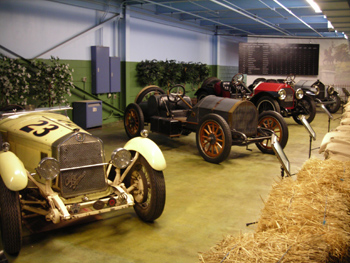 The Simeone Collection is a museum that has only been for the past several months. The collection of cars began with Dr. Fred Simeone’s father and continues today with some of the rarest and significant cars in racing history. 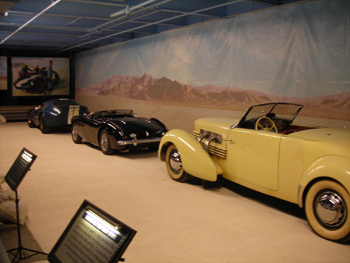 Dr. Simeone and local artist have done a great job creating murals and dioramas of significant automotive events. The backdrop of the Bonneville Salt Flats displays some cars that actually raced on the Flats. Tim knew many small details of each of these cars filling in the blanks the plaques could not tell!

The Daytona coupe on the end not only had an interesting life in competition, but continued making news decades after it’s first win. Just “google” “Phil Spector Daytona” and you’ll hear a story that you just can’t make up! 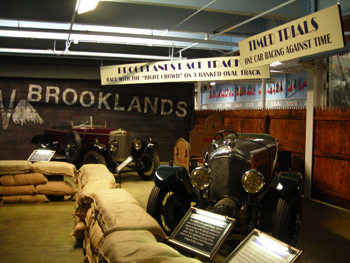 The wonderful displays that showcase these cars have come a long way from Dr. Simeone’s old garage. People who have known Dr. Simeone told me that his large collection of cars used to be stored in cold dark warehouse in Philly. He was always happy to give personal tours of his cars to car clubs and enthusiasts, but having them in this new facility has really brought these cars into the light literally and figuratively!

Spanning the decades of racing history the LeMans pit row has room for some fantastic 12 cylinder Porsches and Ferraris. 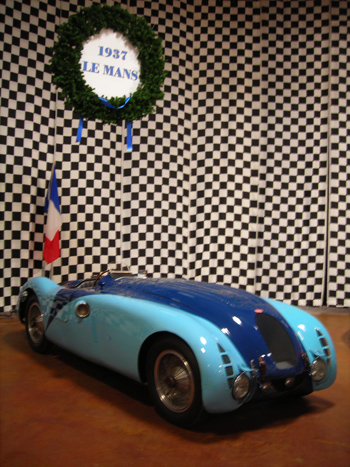 I think if I had to pick a favorite car, it would have to be this one. It’s a 1937 Bugatti 57G “Tank.” It won LeMans in 1937, and this is the only one that survives of the three that were made. Although it echoed the Art Deco Movement of it’s time, the shape of this automobile was not seen on other cars for years!

Make plans to visit the Simeon Collection if you’re ever in Philadelphia. It’s well worth the trip. Since 90% of these cars are running and driving, I heard that on certain saturdays, cars will be run on the three acre parking lot in the back of the museum. Now that would be worth the trip alone!

Thanks to Tim and his friend Doug for spending the time with me and Mike and taking us on the tour of the museum. It’s a place I will definitely be returning!