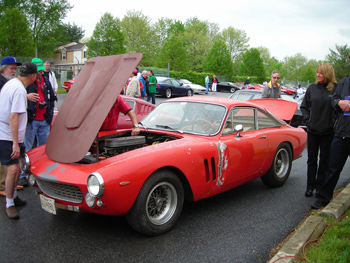 Every year at the Radcliffe/tomyang.net a Ferrari shows up that sends a stir throughout the crowd. Last year was Patrick’s largely original 275GTB short nose, but this year Patrick had some competition for “most talked about Ferrari.” The car was a 1964 250 Lusso owned by Richard Trebelhorn. This car had been owned by Richard for 35 years, and was bought at a time when she was just another used Ferrari. 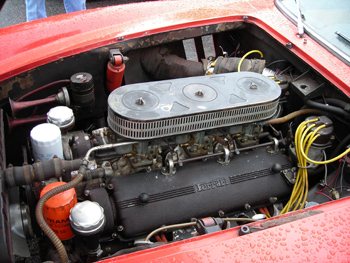 Matt Trebelhorn, Richard’s son e-mailed me years ago to tell me about his father’s car, and tried his best to motivate his dad to fire up the old Ferrari to bring out to the Radcliffe Event. Through the years, the car has been showing her age, and the dents, scratches, and mishaps were beginning to add up. Almost embarrassed to drive the Lusso, Richard parked the car for 4 years until a few weeks ago when he began the process of getting her ready for the show.

Dad does value the car, though.  Every car guy looks back at the late 60s-early 70s, and sees old ads offering a GTO for $8500, and think about the missed opportunities.  My dad picked up his Lusso around then, when it was just some noisy old car — I’m sure he told you the story.  He has driven the car at Mosport, Lime Rock, Watkins Glen, Summit Point, and I think at Road America, too.  And my mom has picked me and my sister up from elementary school in it, when our Fiat wouldn’t start.  I’ve seen him turn pieces of 5063 over in his hands, sitting on a stool in the garage, marveling at the casting, the complexity, the craftsmanship.  He appreciates the car — he really does. 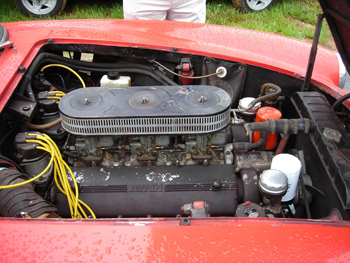 After an oil change, fresh battery, and general tuning, the Lusso fired up for her first spin around the neighborhood. Soon, she was ready for her 40 mile trip to Radcliffe Motorcars in Reisterstown, Maryland.

When Trebelhorn Sr. arrived, the true gear heads stopped in their tracks to see this car pull up in the parking lot. We all see so many Lussos with fresh paint and new interiors, but our eyes couldn’t wait to explore the years of patina that accumulated in this car. To the uninitiated, it looked like a clapped out old sportscar, but I saw something that still had many of the original finishes and details from the factory that was not obliterated from a full restoration. 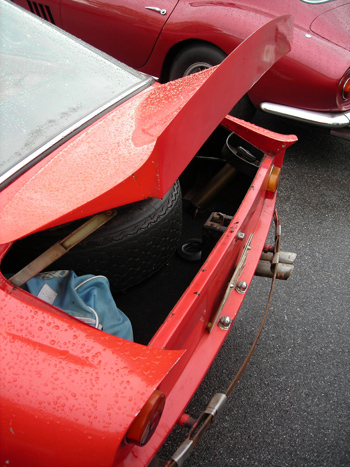 As I poured over all the details special to this car, from the pronounced tail and side vents, Richard also pointed out the impromptu bumpers made from MG leaf springs! The owner had the original bumpers rechromed, but felt they were too nice to put back on a car with needs. 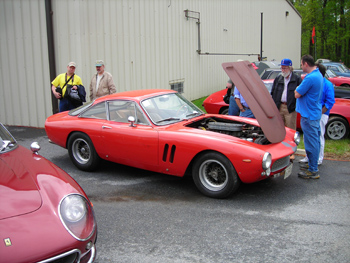 Richard plans to give her some attention in the near future, but we didn’t need a freshly restored car to see the love. Good on you Richard!