It was either the excitement of staying at Hilary Raab’s house, or the fact that we had more adventure ahead of us, but I awoke at 6 am to start my day. 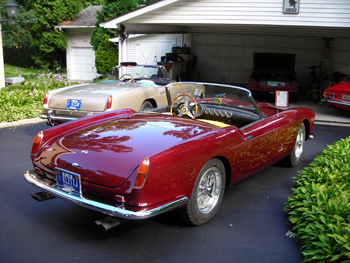 Hil had to go to work in the morning, but moved the two cars out to the driveway that we would be taking up to Elkhart Lake. One of each Pininfarina Cabriolets was represented in Series I and Series II cars. I was honored at the chance to get these cars prepared for our drive to Elkhart Lake, Wisconsin. Hilary was bringing these cars in for display only, but we tried our best to make them shine. 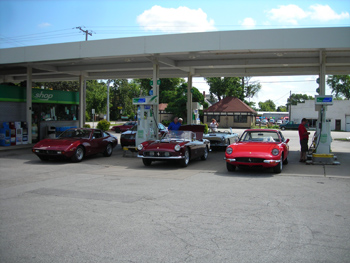 Our first stop was for fuel about five minutes from Hil’s house. It was quite a line up at this gas station with a couple million dollars worth of cars filling up! 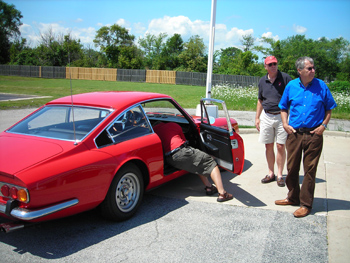 While Mark was idling in the gas station, however, I noticed coolant starting to boil over from the radiator. Soon, we discovered the electric fans were not coming on, and on closer inspection, the fuse panel had overheated and burned up the spade connector. Mark knew exactly what had to be done to get his car back on the road, but neither the gas station, nor any of the other cars had the correct connectors to make the repair, so I punching in a search for the closest auto parts store in a GPS unit. Mark and Tom Kizer took Tom’s Lincoln MKZ to the get parts while the rest of us stayed behind. 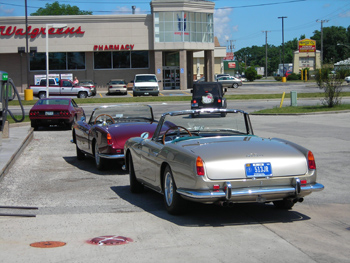 We pulled out of the pumps and waited patiently for Mark to return. Although I had nothing to do with the problem, I apologized to Hilary for the delay. As a true gentleman, Hilary was not bothered in the least bit, explaining after all the years of owning old Ferraris, he was used to it. “You drive a while, and then you fix a while!” We passed the time hearing Hilary’s stories about roadside fixes made on old Ferraris throughout the years. 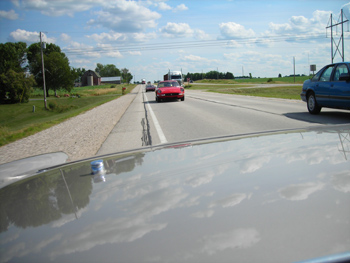 After an hour or so, we were back on the road. Mark managed to get the electric fans working after the second try. He cannibalized another circuit on his fuse panel to get his fans working. Who needs interior lights and a horn? The burned out circuit may have happened earlier, but wasn’t caught until we stopped for gas. Mark’s previous day was spent barreling up the interstate so the fan’s weren’t really needed. Catching the failure before we headed into the Chicago area traffic was actually a lucky thing as fixing this problem on the side the freeway would have been a lot worse! 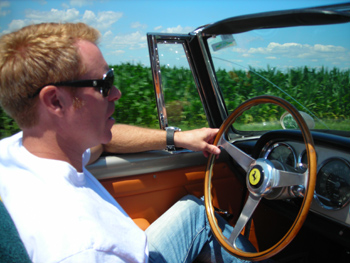 I rode with Todd in the Series II Pininfarina Cabriolet. Hilary let Todd take this car in place of his GTE that was home with a missing windshield gasket. Not a bad consolation prize for leaving his car at home! I jumped at the chance to ride in the passenger seat apologizing to Sam for abandoning him in his C/4! I hope he meant it when he said he understood. 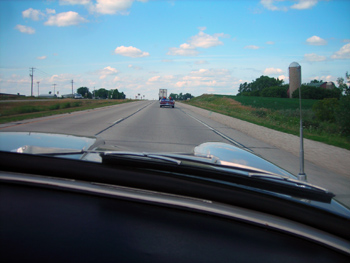 There was construction all along the road through Chicago, but we managed to miss any stop-and-go traffic that area residents warned us about. The 90 minute delay fixing Mark’s car seemed to help miss the traffic others reported once we got into Elkhart Lake. Luck was definitely with us.

On one gas stop north of Milwaukee, Tom Kizer asked how we were doing in our open un-airconditioned car thinking we must be pretty beat up from the 80 degree heat after over four hours of driving. Todd and I looked at each other and agreed we were both none worse for the wear. The Series II 250GT PF Cabriolet was very comfortable at 70 mph, and conversation could be held without much yelling. Even after five hours of driving, I still had my voice! There was no buffeting in the car at highway speeds, but instead we had a nice gentle circulation of air in and around the passenger compartment. I never even noticed the back pressure of air that usually hits you in the back of the head from many other convertibles that offer that silly windscreen behind the front seats. Comparing ride quality with Hil, his Series I Cab was just as comfortable to drive He told me that he felt convertibles was one thing that Pininfarina really got right.

We arrived in Elkhart Lake just in time to take the last few places in the Ferrari only parking lot. It was such an honor to make an entrance in our four cars knowing we drove into the Ferrari Club National Meet under our own power and in such class. We were welcomed by all the Vintage Ferrari guys in the parking lot, many were the usual suspects, but I also met some new guys that follow this website. Running this website has its benefits, but after having a one way monologue with this journal, I love meeting people in person and sharing our passion where I’m not doing ALL of the talking!

I joined Sam Hallowell and his family that flew out to meet him in Elkhart Lake. The Ostoff Resort was the Host Hotel, and had a couple nice choices for dinner, and we chose to sit outside for dinner. Unfortunately, once the sun went down, the mosquitos came out in full force! We managed to have a nice dinner despite the blood sucking critters.