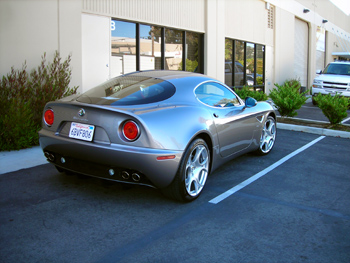 This is the second year in a row I’ve begun the Monterey Car Weekend in the San Francisco Bay Area. My friend, Tom K. always has an interesting car to drive down, and this year was no different with his Alfa Romeo 8C Competizione! This limited production carbon fiber “it” car is truly a thing a beauty, and despite it’s ergonomic foibles, she woos everyone with her unbelievably good looks. Initially, Tom did not want to take the Alfa to Monterey because of the stigma of driving such a high profile car, but I managed to convince him we wouldn’t look like a couple of Poseurs! 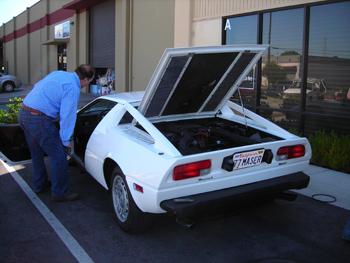 Just as we were trying to figure out how to fit our luggage in the car (There is no boot anywhere in the Alfa!), a friend of Tom’s pulled up in his Maserati Merak. Richard had never been to Monterey, and Tom had promised to lead him down the coast to Monterey, but Richard already arrived with a problem. He said he was driving along, heard a loud pop, and his alternator light went on. After pulling the spare tire out off the engine compartment, we found the melted remnants of plastic where his alternator belt used to be. I checked the pulleys to see if one of them had seized, but they all turned fine. Maseratis of this era use the same skinny belt fount on Ferrari 308s for the alternator, and certainly not available from a local auto parts store, but we needed something to get Richard to Monterey! After getting a measurement, Tom headed to the auto parts store, and I started to unbolt the crazy drive shaft set up to get to the alternator pulleys. 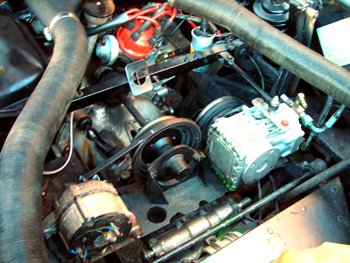 Although it was not ideal, we found a replacement belt that wouldn’t get slung off when we revved the engine, so we were on our way!

We stopped in Pascadero California on the California Coast for lunch. Artichoke soup all around and more car talk during lunch. Richard told us his alternator light was not on, but his voltage meter was only showing about 10 volts on the trip out from San Carlos. We started brainstorming the possibilities, and felt that either the belt was slipping and not charging, or the alternator was not working and may have had something to do with the broken belt. Richard started out with a fresh battery in San Carlos and drove 90 minutes to lunch, half way to Monterey. Our choices were to push on for the final leg of the trip, or stop to buy a spare battery in case the Merak ran the current battery dry. Tom convinced us to stop for a spare battery.

With a new battery in the back seat, Richard caravaned with us on the final leg to Monterery. Just as we thought we were going to make it to Monterey, I noticed the Merak pulling off in Seaside, about 5 miles short of our destination! Unfortunately, already late for Monterey, we were forced to call Richard, and wish him good luck with his car. Tom had left him all the tools he would need to swap out the battery, along with a battery charger to top up the flat one over night, but we had to get into town! 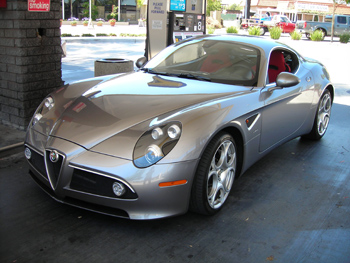 Tom had to drop a car off at The Quail Event, and I got to follow him in the Alfa. I normally don’t like all the attention a flash car can attract, but since it wasn’t my car, it was easier to pretend! Traffic in Monterey is horrendous, and this Thursday afternoon was no different. We were stuck in bumper to bumper traffic heading south on route one when coming the opposite way was ANOTHER 8C! The owners enthusiastically waved at me, and I tried my best to casually wave back, all the while seeing Tom K. smirking at me in his rear view mirror!

Thursday night was the Tomyang.net dinner party held at a Carmel Valley restaurant. Many regulars of the website showed up, and I got to put some more names to faces with several newcomers to the Vintage Ferrari Fold. Lugano Swiss Bistro reserved some spaces in the parking lot for us and even made a special menu for our group. The food was great, the company was great, the party was great. We’ve definitely moved up from a breakfast room in Monterey Motel.