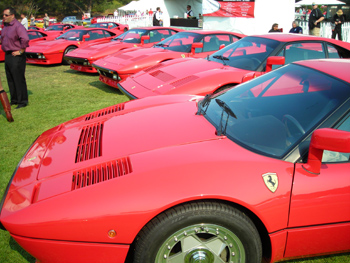 This year Consorso was at a new location, and gratefully on a lawn! After last year’s undisputed disaster on an airport tarmac, the event was sold to a new owner with a vision harking back to its glory days. I was given a ticket to attend (thanks Steve) so I went early to check out the new venue. If you were on their mailing list prior to the show, you received a steady stream of e-mail announcing each improvement and added feature to the show. If you believe in marketing, it paid off in spades. 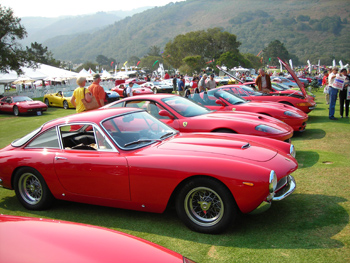 The word on the show field and everyone on the peninsula was that Concorso had returned to the way it was several years ago. We may never have the days when Quail and Concorso were one show, but this was as good as Concorso can get. Turn out was great, and the organization was excellent. Parking was plentiful, and ingress and egress was easy. If I had one complaint, it was the parking of the show cars. Ferraris were shown across about five sections and parked in a first come first served basis, so Lussos were parked next to 360s, parked next to Daytonas. I would have liked to have seen the cars shown according to age, so the owners could see similar cars parked next to each other. 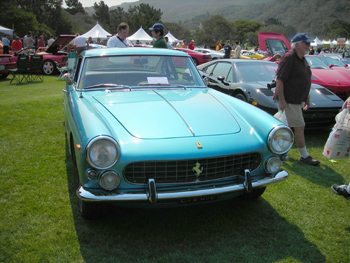 With the hodgepodge parking, I found the owners closing up their cars to have a look at other cars on the other side of the show field. Vintage Ferrari owners rarely find things in common with newer Ferrari owners, so finding other vintage owners required leaving your car unattended. I saw three GTEs at Concorso, but all three were without owners when I stopped by to have a look. Some of them I met before, but wished I had a chance to say hello! 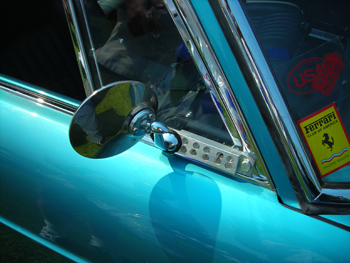 I liked the solution this owner made on his car on installing a right side mirror without drilling holes in his door. 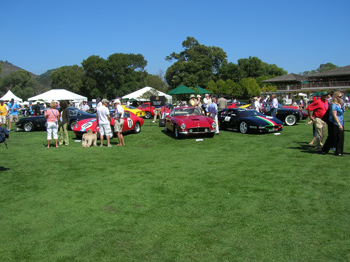 At about Lunchtime, I headed over to Quail Lodge for the hottest show on the Monterey Peninsula. Rumor has it open tickets sold out within 15 minutes of sale, but I’m lucky to get my ticket from someone who gets advance tickets (thanks Rudy!). The show was as great as always with a good variety of cars, with the only thing missed being the dessert selection! I luckily made up for it with some tasty Gellato on the hot sunny day. 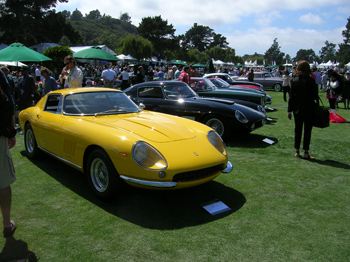 Quail limits its ticket sales so the crowds are low, with plenty of seating and room to look at the cars. The biggest complaint has been the escalating ticket prices, and at $350-400 a ticket, it has become a very exclusive event. 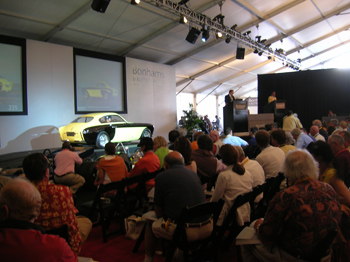 The Bonhams auction is in the same location of the Quail event, so it was nice to sit down in the tent and watch the cars cross the auction block.

A third show on the Friday of Monterey Car Weekend was a newcomer called “La Dolce Vita,” which was a organized by a group of car guys in response to last year’s disastrous Concorso Event at the Airport. Little did the new guys realize Concorso would come back under new ownership with a fresh direction. La Dolce Vita had very little comparative press, and many people either forgot it existed, or decided if there was one show they could afford to attend, it would be Concorso. La Dolce Vita was unfortunately lightly attended, and may have proven that three shows on the Peninsula may be too much for Monterey Friday.