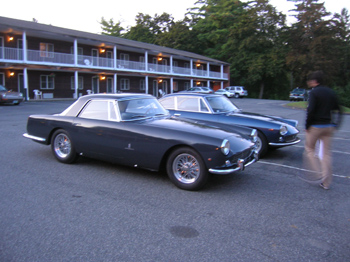 The owner of PF Coupe 1747 is planning on taking this car to West Virginia for the Mountain Mille, but I wanted David to come up to CT for a shake down drive to familiarize himself with the car. David owns a newer injected Ferrari, but has not spent a lot of time behind the wheel of a Vintage Ferrari, so I wanted to get the introductions out of the way before the big drive.

Yale drove up from New York City in his four headlight 330 to join us at François’ shop and caravan to our first stop in Great Barrington, Massachusetts. I had originally considered taking my 330 on this trip as well, but soon realized we would spend two or three days alone in separate cars! Having me switching between passenger seats in the two cars was much more enjoyable, and I could focus on getting the most out of David’s PF Coupe.

It seems a trip with Yale’s 330 would not be complete without some kind of mechanical issue, and we started the first full day with a no start issue. Battery was good, connections seemed good, but there was no starter noise. With the three of us, and the help of a mute porter at the Days Inn that was strong as an ox, we pushed the car out of an incline and push started Yale’s car. When Yale finally had to stop his car, the starter worked as if nothing happened. Maybe Yale’s Ferrari was simply reminding us who was in charge, and it was her choice to behave. 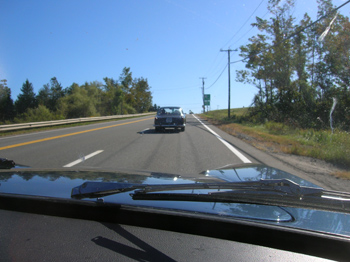 We pointed our cars west towards the Boston area through fabulous New England back roads. The weather was a perfect 70 degrees with low humidity, and the PF Coupe was doing a great job of winning over David’s heart. The original Abarth exhaust on this car sounded great at all revs, and the short stroke 250 engine was quick and free revving. 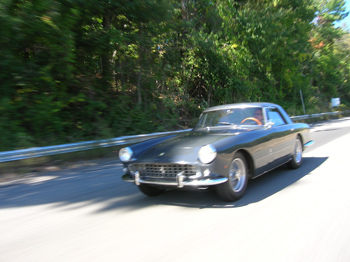 I’ve never given much thought to PF Coupes until I got to know 1747, but now I can really see how nice these cars are. They have an elegance and feel that really speaks of the 50s, but have plenty of power to keep up with modern traffic. The lever shocks on this car perform fine for grand touring, and I think this will be a perfect car for David on the hills of West Virginia. We fitted Blockley Tires on new 16 inch Borranis, and the combination is perfect for this car in stance and performance. These modern tires were designed specifically for classic cars and are a perfect fit for what a PF coupe demands of its tire.

As we neared Boston, we were inevitably caught in traffic on Route 128. As much as I didn’t want to break down in an old Ferrari, it was a true test to see if the car’s cooling system was up to snuff. I had installed a modern electric fan in the PF Coupe, but it was Yale’s 330 that started stumbling. As we pulled off the highway, his car stalled, and he couldn’t get the right combination to get her fired up again. In desperation, I jumped in the driver’s seat, and managed to get her started. As we found some less congested back roads, the 330 managed to cool off and calm down, but my phone rang, and it was David this time pulled over by the side of the road. I turned around and found him a half a mile back not understanding why his car just stopped running. He told us he felt the car start stumbling, and then there was no throttle response right before the engine shut off completely. No matter what David did, 1747 just wouldn’t start. The PF Coupe was exhibiting classic vapor lock, and as I turned on the electric fuel pump the rapid refilling of the fuel bowls in the carbs confirmed it. With a couple of pumps of the accelerator, the Coupe fired up, and we were on our way.

That desperate moment, was probably worth this whole trip for David. He now knows the symptoms of vapor lock before it actually happens, and can remedy it before it leaves him stalled at the side of the road. Shake down cruises are good for both the cars and the drivers!

Our main destination was Essex Massachusetts to visit Paul Russell and Company, a well known restoration shop, but we first got lunch at Woodman’s, a locally famous crab shack. Several New England Ferrari owners came out to meet us in Essex for the shop tour, and everyone at Paul Russell’s shop was great. 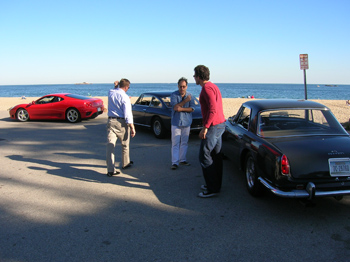 Gary, the owner of the GTE we took to Cavallino last year came out with Suzie in their 360 Modena, and took us for a short tour to Manchester-By-The-Sea. We did the loop at Singing Beach and got out to look at the ocean before we headed into the heart of Boston Traffic!

Yale headed back to NYC, while David and I headed across Massachusetts on Route 2 to avoid much of the traffic. After dinner at the Wagon Wheel in Gil MA, we motored along in the fading twilight. David finally found the sweet spot in the panel lights, and the gauges glowed softly in the darkness, as we headed home. At one point, with no traffic on the Mass Turnpike, 1747 hustled down the highway at about 100 mph without any drama. This was a very capable car.

During our 450 mile shake down cruise, we found a couple small issues that needed addressing before the car gets shipped to West Virginia next week, but David told me something I was happy to hear. He said that the car exceeded his expectations, and had no regrets in taking over the care of this old Ferrari. It was a great introduction to Vintage Ferraris!