I’ve been working on a 275GTB restoration for a client out of Sport Auto by Bill Pollard for the last 6 months, and progress has been coming along nicely. Perhaps someday I will be able to share with you some of the work I’ve done, but for now, you’ll have to take my word for it, I’m having a great time! 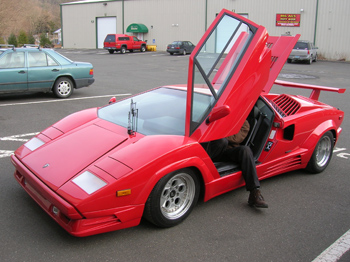 Pollard’s shop basically specializes in older Ferraris, but will occasionally work on some of the newer cars, but recently, some other makes have been floating around the shop. This is the second Lamborghini Countach I’ve seen in the last four months, and I had a chance to take a closer look. 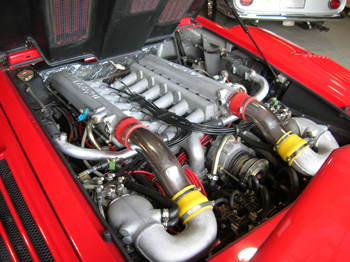 I’m sure you know the legend of Lamborghini vs. Ferrari where Ferruccio Lamborghini, a successful Italian Tractor manufacturer brought his Ferrari back to Enzo Ferrari in the 60s to complain about his new car. The Commendatore, not happy about the criticism, questioned the ability of a tractor builder in judging a real sports car. Infuriated with the insult, Lamborghini vowed to build a car that would beat Ferrari on the street. Whether the story is true or not, there still remains a rivalry between the two manufacturers to this day, and with every subsequent model there is always an air of one-up-man-ship. 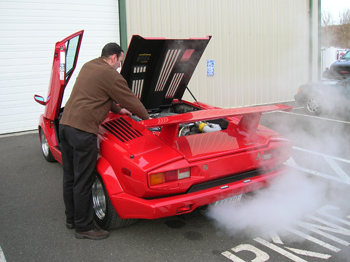 This Lamborghini was a later 25th Anniversary Edition car, so it had more flares, cladding, and intakes, than the previous model. 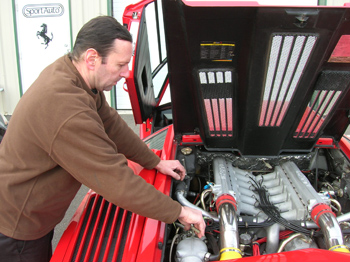 This car came in with a poor idle and badly needed some adjustment to the fuel injection along with the ignition timing. Both the Ferrari Boxer and Lamborghini Countach used the same Bosch CIS injection system so Sean, Pollard’s top mechanic, was well versed in getting injection to run as best as it could. 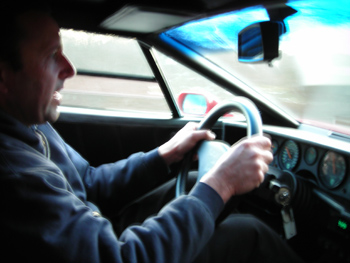 Sean came inside after a while and signaled me to jump in the passenger seat for a ride in the Lamborghini. It was my first ride in a Countach, and it was everything and nothing I expected! 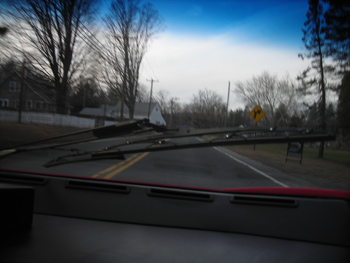 After hitting my head on the door frame, Sean congratulated me on my Countach initiation! We were enclosed inside a very small cockpit for such a wide car. Forward vision was fine out of the huge flat front windshield, but my passenger view was obstructed by the one large windshield wiper. The other three views gave the feeling of looking out of a WWII pill box with the rear window the size of a mail slot. We felt low, mean, and menacing, and I think it was exactly what Lamborghini was after.

I could make comparisons between the Countach and the Ferrari Boxer, but besides some similarities in performance and layout, they are very different cars. As much as a Boxer tells the owner he is control of a super car from the 80s, the Lamborghini screams it to everyone within earshot. These cars are not for the timid if you’re the right guy, I have the right car.