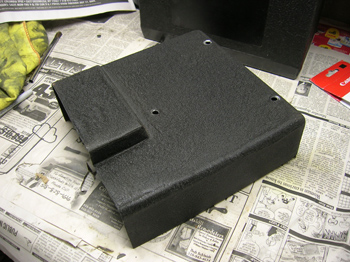 I was contacted by a new owner of a 330 America, and the first thing I noticed was he was missing his fuse box cover. Since I have one on my 330 America, I offered to have one made for him. 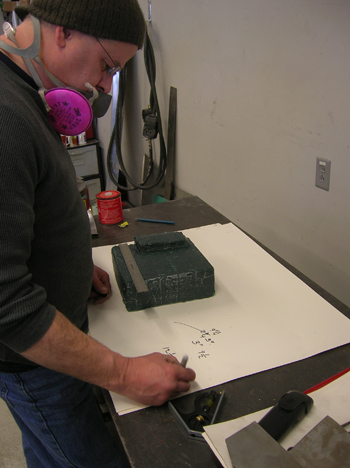 I made a mold from my fuse panel out of fiberglass and took it to Mark Barton at The Panel Shop in Stratford CT. The first step was to measure and cut some aluminum stock. Just as in carpentry: measure twice cut once! 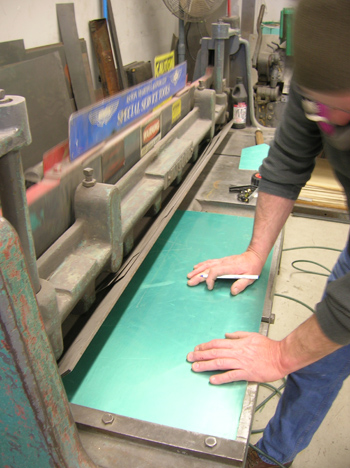 It’s a lot easier to cut aluminum this way than with a pair of aviation snips! 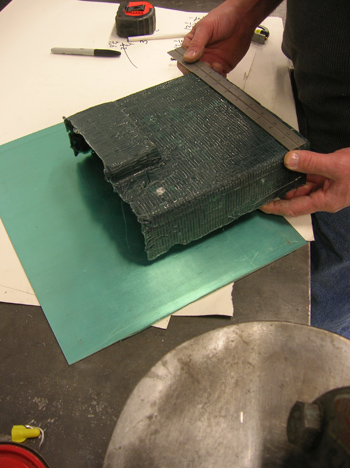 The mold showed Mark the inner dimensions of the fuse panel along with the little kick out at the bottom of the cover that will have to be welded on. My fiberglass mold looks rough because I covered my original fuse panel with duct tape so it would release the fiberglass without damaging my cover. It wasn’t pretty, but certainly good enough to guide Mark in making a copy. 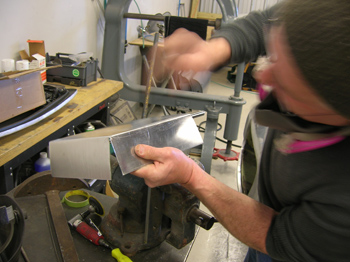 After roughly folding the edges over to form the main body of the box, Mark used a slapper tool and rod shaped backing piece to roll over the crease to copy the shape of the original cover. 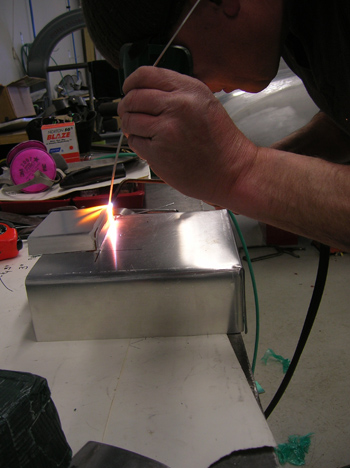 After cutting and bending the little piece that goes on the bottom of the fuse panel, it was time to weld the pieces together, however, when Mark fired up the TIG welder, he found he was out of Argon gas!

TIG (Tungsten Inert Gas) welding uses a tungsten electrode shielded by an inert gas to strike an arc and weld metal creating a very clean, precise, and strong welds. This type of welding has been around since WWII, but was not widely available until much later because of its expense. Before TIG, aluminum was welded together using a torch, melting a rod of material into a molten pool formed by the torch. Most all Vintage Ferraris were gas welded, and the construction of this fuse panel was also done with a torch, so it was almost fitting Mark had to weld this panel the way it was originally done! 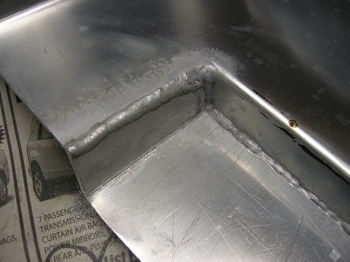 Even though he preferred using the TIG Welder for speed and accuracy, Mark was no slouch welding aluminum with a torch. Some people can’t make welds look this good with a TIG! 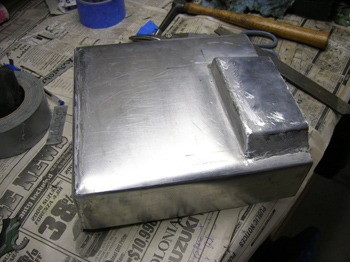 With a completed fuse panel, my job was to file, and smooth the surface of the cover for a coat of black wrinkle paint. I’ll leave the holes to mount this panel un drilled, so the owner can precisely fit this cover to his car. No two cars are alike, and it’s best to custom fit something whenever you can.

While I was at the Panel Shop, I took some pictures of some of the other projects they have going on. I added these pictures to their Blog.