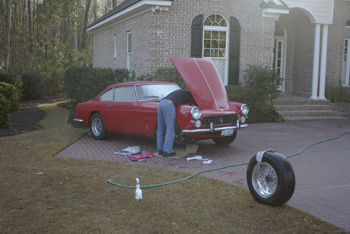 I woke the next morning and checked my forum to find several messages of support and notes of encouragement to not give up so easily. Some good ideas were suggested, and I went outside to see what I could do. 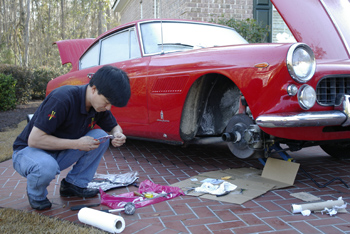 The flexible rubber hose to the front right brake line had burned through, so there was no way that caliper could be used. The left caliper seemed fine, so I needed to stop brake fluid from reaching the bad caliper as some of my friends from the Internet had suggested. The plan was to block off the line at the fitting before the flex hose.  I knew there was a ball bearing used in the Dunlop caliper under the bleeder screw, but found it to be too large for the fitting to catch the threads. I asked Rich, Tom, and Mark to think about what else we could used inside the brake line to block off the fluid. As we put our heads together, I thought about my knock off hammer! 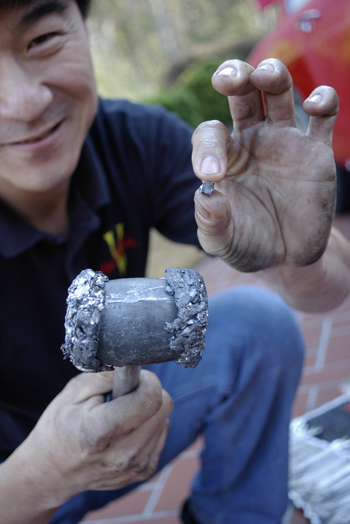 I cut a small hunk of lead off my hammer and fashioned a small slug to fit inside the fitting to plug up the steel line leading to the bad rubber hose. As the brake fitting was tightened down, the lead did a perfect job blocking the brake fluid off. I took the car down the street and found I at least had three brakes working. We saddled up, and headed out! 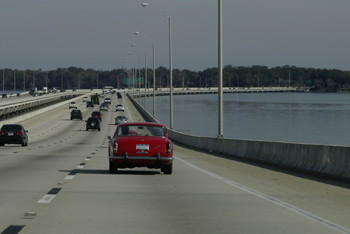 We decided to have Mark lead in his 365GT 2+2 with me following at a safe distance. Rich rode with Tom Kizer and we transferred all the extra weight out of my car into the other two Ferraris so I could stop the car as efficiently as possible. I needed all the help I could get considering any amount of braking woudl send my car shooting towards the left side of the road! I told Mark that if he had to stop suddenly for any reason to stay straight becasue I would be coming through either the right or left side! 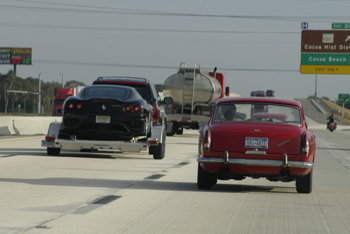 As we got closer to our destination we got faster and faster, reaching speeds over 65mph. I was on edge the whole time planning an escape route every second of the way. The greatest irony was when we were passed by a fairly new Ferrari with New Jersey plates being towed down I95 while I was limping down the highway to Palm Beach in a 47 year old car with three working brakes! 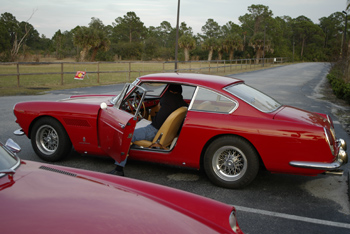 70 miles outside of North Palm Beach, the fuel pump began acting up. We fiddled with different techniques and assessed out options. We were so close to making it, we could taste it. Mark peeked under the car and he found the fuel pump would click when he touched the cap lightly. After moving things aroiund a little, we found the sweet spot where the fuel pump would keep running. With the engine finally running, we jumped back in our cars and headed out. 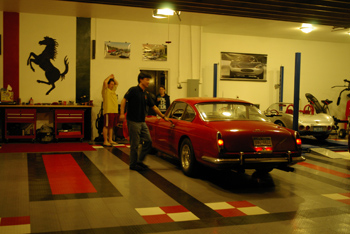 It was such a relief to finally get to Bill Tracy’s house in North Palm Beach. I wasn’t sure what I was going to do for the rest of the weekend, but at least we were safe in Bill’s garage.