Now that I was in the Palm Beach area, I parked my car and tried not to worry about it. I promised to present a slide show at a lecture being held at the Breakers, so I had more important things to worry about. I had been preparing for a month, collecting pictures that would describe the differences between the Series I, II, III, and 330 Americas. I had assembled all my pictures in a Powerpoint presentation that I could show to a room of about 75 Ferrari enthusiasts. Always preparing for the worst, I mailed a thumb drive to Ron Gaeta the week before so if something catastrophic happened to me or the car, the show would still go on! Luckily, when I saw Ron with the memory stick in his hand, I didn’t need it. 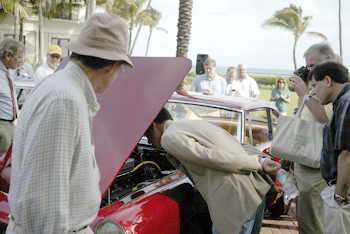 I met Rick Race, the MC of the lecture, and he directed me to the people who could set up my laptop and get my pictures on the big screen. Alan Boe, Bill Preston, and I were given the podium to share what we knew about GTEs and 330 Americas, and I thought the presentation went quite well. Afterwards, we stepped outside to see some GTEs up close. I’ll be updating the “GTE Spotter’s Guide” with these new pictures when things settle down a little. 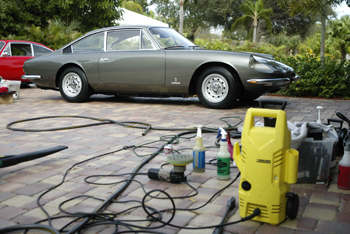 Back at Bill’s house, Todd Helm began detailing Tom Kizer’s 365GT 2+2. He had his work cut out for him considering it had road grime all the way from Quebec City! 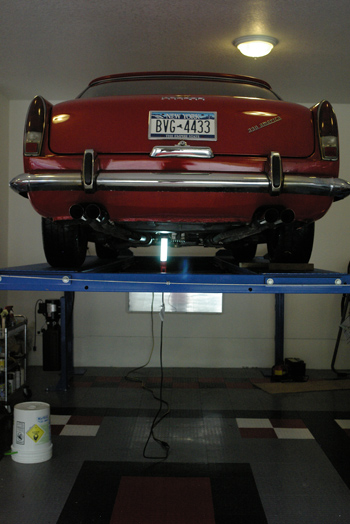 After lunch, I went back to the house to see what I could do about my car. Todd and Angie Hudkins delivered a fuel pump rebuild kit from Indiana, and Tom Willson came over for moral support. 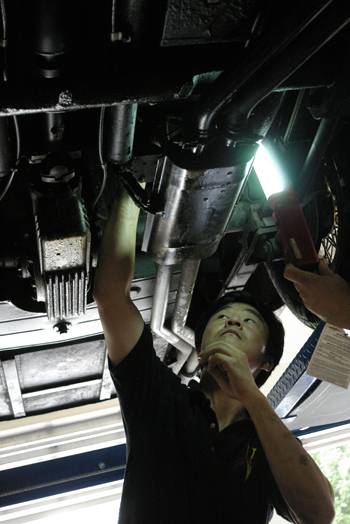 I decided the first thing was to find out why the electric fuel pump was acting up. I soon found a loose connection inside the fuel pump cover, so that was an easy fix. 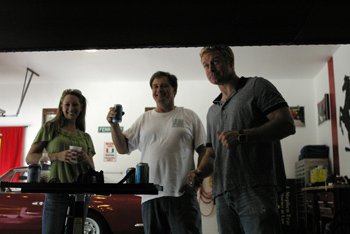 We had several Vintage Ferrari owners watching and socializing at the garage, and everyone was ready to lend a hand. My only complaint was I couldn’t join them in watching someone else work!

The next problem was the mechanical fuel pump. Pulling the pump to rebuild it required doing something about the 15 gallons of fuel still in the tank. I decided to disconnect the soft fuel hose from the tank and raise it higher than the level of the fuel instead of draining the tank. I’ve never been able to do this maneuver without taking a bath in fuel, and this was no exception. Needless to say we took precautions, but it’s never safe to have fuel soaked clothes! Trust me when I say that whatever they’re putting in the fuel these days sure burns the skin.

Without fuel trying to siphon out of the mechanical fuel pump, I worked on removing the fuel pump. In my mind this was a simple procedure on a Ferrari V-12, but not so for a 330 America! Since the engine is bigger than what this chassis was designed for, the clearance for the fuel pump was tighter. It took removing some extra pieces, but we finally got the fuel pump out. With everyone watching and helping, we all lost track of time except for Mark Dempsey who came into the garage dressed in a sport coat. It was 4:45 and the Jet Reception was in 15 minutes!

I cleaned my hands as best as I could, and jumped in the shower to wash off the overwhelming smell of unleaded fuel. 15 minutes later, I was inside Mark’s car shaved, showered, dressed, and ready for a cocktail. My 330 America would have to miss out on another event. 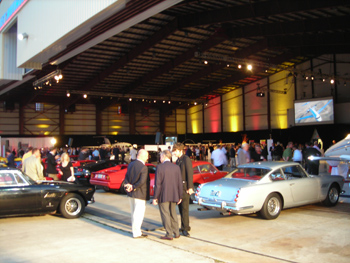 It’s always a fun time to have Ferraris parked on the tarmac next to all the corporate jets on display. I made the usual rounds, caught up with old friends, and met new ones, but my Ferrari was always on my mind. I wanted to get back to work and try to get her running again. Not only did I want to take her to some of these events that I had registered for, but she was also my ride home! I had to do whatever I could to get her back on the road. There were many people willing to help me out with my problem and Greg Jones, a local Ferrari restorer, had brought a new brake hose down from his shop in Stuart Florida. I called him and arranged to pick up the hose and some extra pieces on the way back from the Jet Reception.

When we got back to Bill’s shop at about 10 o’clock, we continued on the fuel pump rebuilding. The diaphragm seemed O.K. but when I put my mouth on the check valves, they didn’t seem to be closing very well. Looking at the parts in the rebuild kit, the old check valves were slightly different than the ones in my replacement kit. When I rebuilt my fuel pump years ago, I managed to get an NOS kit, and there were two sizes of check valves. The rebuild kit I had in my hand had only one size so only one set could be replaced. Without much option, I replaced what parts could fit, and re assembled the pump. It was late into the evening before we had the pump back on the engine, so we called it a night.