I got up early and got back into getting the fuel system reconnected. After failing to get the hose on the fuel fitting without a major fuel bath, I decided to drain some fuel from the fuel tank. Eventually, I got everything hooked up, and we took the car off the lift to see how well our fuel repairs worked. The electric fuel pump worked perfectly, and once the engine started, she seemed to idle fine with just the mechanical fuel pump! Our fuel issues for now were sorted! 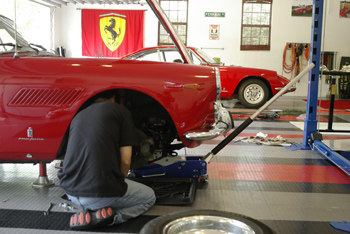 The next step was to figure out what to do about the brakes. I was hoping that the reason why the right caliper seized was because of a collapsed rubber brake hose was acting like a check valve. Even though I replaced these brake hoses when I completely rebuilt my brake system I was reminded this was over 6 years ago! I always feel that the easiest thing should be fixed first, so it wouldn’t be hard to first put a new brake hose in and see if my problem was solved.

Within an hour I had the plug removed, and Greg Jones’ new brake hose installed, but with everything back in place, I found the caliper was still sticking. I removed the caliper piston and found some evidence of corrosion inside the bore. Luckily the bores were re sleeved with brass inserts, I cleaned up the surfaces with some fine sandpaper. With everything back together again, I found the caliper still sticking, but this time, I checked the left side and found the left caliper sticking as well!? This didn’t make any sense to me as I just drove over 400 miles on one front brake without it seizing, but I needed to investigate it further. After conferring with Zac Dugger and Greg Jones by phone, I needed to check the front equalizer. This unit is found on 250GT cars, and can seize and not release pressure. Releasing brake pressure between the equalizer and the booster would help me determine the culprit, but first I needed to get a 12mm brake flare nut wrench. After another call, I found Parker Hall had the tool in his truck at the track, so we all jumped in a car for the track to get some lunch and to borrow some tools.

By the time we returned to Bill’s house, it was time to get ready for a party I was hosting at Ron Gaeta’s house. Owners of GTEs, Ferrari historians, and friends of this website were all invited to attend, and Ron and his family generously offered their house to host the party. I headed over early to help out in whatever I could, and waited for people to arrive. 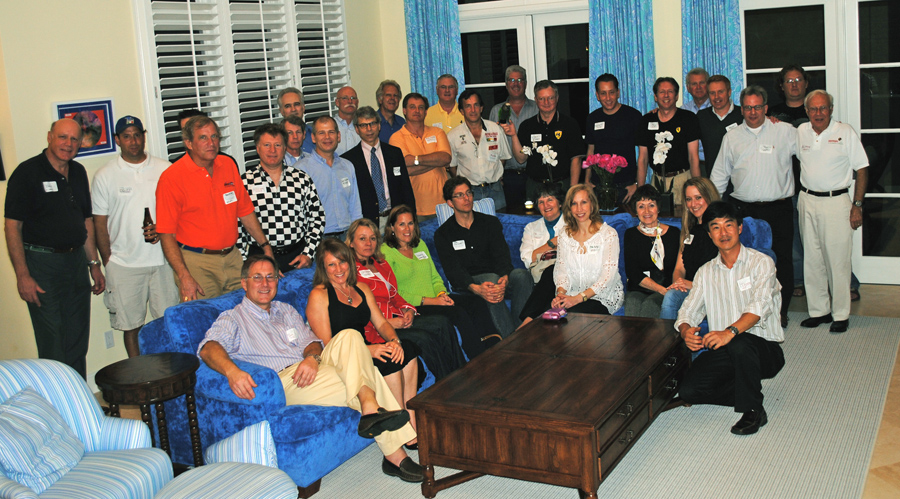 Ron and his family had just moved into this house a year ago, and this was the first party they’ve thrown, and it was an absolute success in every way. The food was fabulous, the house was beautiful, and the company was great. My only regret was not being able to listen in on all of the simultaneous conversations going on by the guests about Vintage Ferraris!

During the party, I spoke to many people about my brake issues. Greg Jones and Zac Dugger both tried their best to persuade me to get my car to Cavallino. They felt I had come this far and was so close to having the car on the lawn at Cavallino. Zac asked me how many more chances was I going to have to bring my car to the Breakers. All these conversations were echoing in my head on the way home from the party. I found myself laying awake at night thinking about what to do. I nearly got up at midnight to go down to the garage to hatch a plan, but decided waking my hosts Bill and Lisa Tracy so late in the evening would definitely overstep my welcome. It would have to wait until tomorrow, the morning of the Cavallino Classic, to make my move.