Glacial Progress on the Brakes 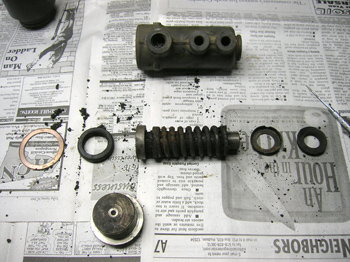 I checked all the usual sources for the two seals inside the brake equalizer, and I’ve come up empty. Since I was sending my calipers to Karps Brake Service, I spoke to them about my equalizer. Karps works on all types of brakes, and they recall seeing one or two of these things in the past. They have a supplier in the U.K. that they managed to source seals in the past, but prices have gotten higher and higher due to shipping and exchange rates. It’s not gotten to the point that it’s cheaper to have these seals made in the U.S. by Karps. Karps Brake service already makes obsolete seals for Ferrari brake boosters, and sells them to some of the usual Ferrari Suppliers, so they don’t see any problem with making custom seals for this equalizer. In fact, while researching the demand for this seal set, one of Karp’s customers pre-ordered 20 sets of these seals! Karps is not interested in selling these seals individually, but if I can get an idea of who wants a set of seals, I can place an order with Karps before the “Ferrari Markup!” Depending on the demand, Karps is guessing a set would be priced in the $20-$25 dollar range. Email me if you’re interested.

During my conversation with Ron at Karps Brake Service, I asked what material will be used for the seals. EPDM rubber is what Karps makes all their seals. The reason this question is so crucial is the type of brake fluid I would like to use on my system. There has been some discussion on my forum about the use of Silicone (DOT 5) brake fluid over the usual DOT 4 fluid in braking systems. It seems people are split in the benefits in using Silicone, and the detriment of swollen seals from the use of DOT 5. Some people claim they never had any problems with DOT 5 with their brakes, and yet EPDM rubber (commonly found in most brake seals) is NOT compatible with DOT 5.

When I asked Ron about DOT 5, her passionately described the problems his customers have had with DOT 5. Having rebuild hundreds of brake calipers and wheel cylinders, he has some data to back up his claim. In fact, he claims he can tell exactly what fluid was used just by measuring the swelling of the seals. The swelling is not much, and is quantified in the thousandths of an inch, but in certain cases is enough to cause problems.

I know I’ve been contacted by several people who own Ferraris that have switched over to DOT 5 and have experienced no problems with swelling seals and hanging brake calipers, but it’s always interesting to collect more data.