6/4/10
Side Glass and Mystery Transaxle Solved! 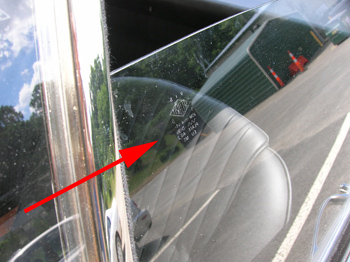 When restoring a car, I notice things that I may have never paid attention to before, and on this 275GTB restoration I completed, I see this little etching on the side glass. 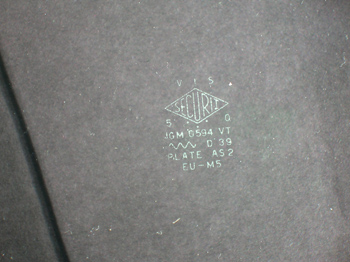 This etching is a manufacturer’s stamp that is found on various pieces of glass on the car. It changes from car to car, and sometimes year to year, but some judges look for this kind of stuff at shows. It’s also nice to have them to match the other pieces when replacing glass.

This 275GTB had some bad scratches on the original side glass and some chips on the edges. With tempered glass, buffing the scratches out was not an option for the risk of breaking it. Having worked at a picture framing shop when I was a college student, I learned glass is an interesting material. It bends a lot more than one would think, but push it too far, and it’ll break into a million pieces. With the tempering process, it’s heat treated to be stronger than normal glass, but when it breaks, look out!

The only option was to have a custom piece of glass made for both sides of the car. Luckily, 60s Ferraris have flat side glass, so the process of making new glass is less complicated. My local glass shop made new blanks and had mounting holes drilled in the glass before sending it out for the tempering process. 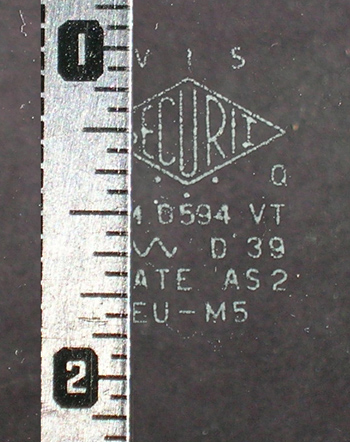 The next step was to have the stencils made. A clean undistorted photograph was needed to be made of the original piece of glass and a reference shot was needed so the stencil maker would know how to size the stencil. “Studio Still Life 201” from Art School sure came in handy with how to light and photograph glass! With a clear photograph a vector graphic is made for the final stencil.

Only one stencil was needed since the glass manufacturer applied the stencil to the same side of the flat piece of glass. On one side of the car, the etching is on the outside, and the other side, it’s on the inside and backwards when looking at it from outside.

There are two ways to etch glass, acid etching or sand blasting. The original method was done with sandblasting. After researching the types of stencils needed for each process, and the resolution needed to reproduce the small print, I decided to go with sand blasting the etch on the new glass. 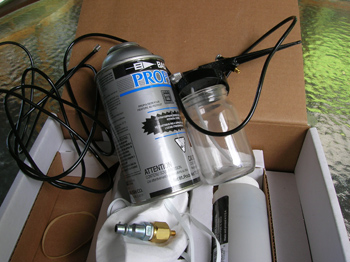 I bought a mini sandblaster kit. It’s available from large art supply stores and comes with the appropriate grit for this process. It also comes with the correct fittings to use shop air, so when the can of propellant runs out, I can use regulated low pressure shop air. 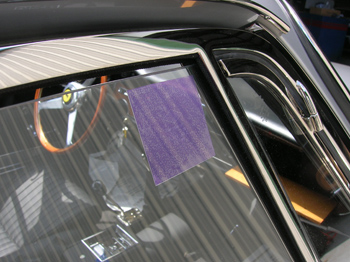 Unfortuantely, for the time it took to have the stencils made, the glass was already installed on the car. I didn’t want to hold up the assembly process to apply the stencil, so they had to be applied at the end. The only problem was masking the car off to contain the fine sand blasting grit from getting everywhere.

The stencil is peeled off it’s backing and applied to the clean glass. I masked the area thoroughly and blasted the little stencil. 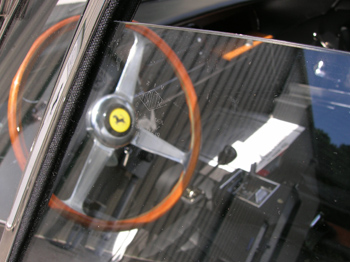 I’ve been looking at dozens of etchings since I began this project, and there is not a lot of consistency. Some original stamps are heavy without much detail and some are faint and barely visible. The ones I reproduced look clean and crisp. The stencil maker did a great job reproducing the etching. It’s a ridiculously small detail, but fun to carry out the whole process! 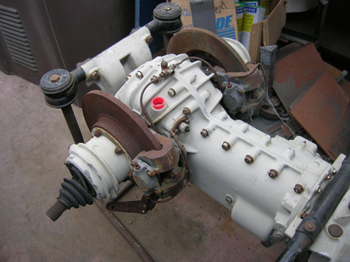 On my last post I showed pictures of a mystery transaxle, and within 8 hours of posting, the e-mails started coming in! It’s a Lancia Flamina transaxle! Several people sent links to sites and pictures showing the same transaxle out of Lancias. 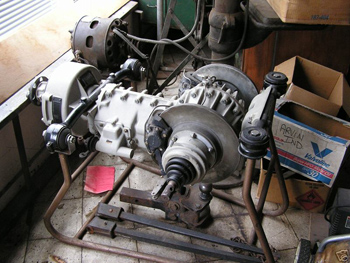 My friend Steve said these were factory displays for showrooms. It’s questionable if there are any guts inside these displays since the display engines were often empty of internal parts.

Thanks everyone who responded. I LOVE the power of the internet!