The little side trip to see the preserved GTE really screwed up my plans with my drive south with my friend Tom K. from San Carlos. For the last couple of years, Tom has brought something interesting to drive on the Monterey Peninsula, and this year, he chose his Ferrari 330GTS. Unfortunately, I had to rent my car out of San Jose, so we had an extra car and an empty seat in Tom’s Ferrari as we headed south on the California 101 freeway. 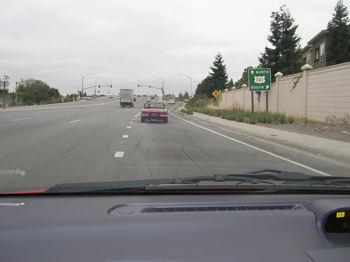 Being the “support vehicle” soon had its advantages because we weren’t on the road for more than 5 minutes when I saw the Ferrari’s hood pop open! Luckily, old Ferrari hoods open forward, so the moving air kept things from getting ugly. It soon became obvious that the safety catch wasn’t working either, so I took evasive action to help Tom pull over to the hard shoulder to gather his wits. 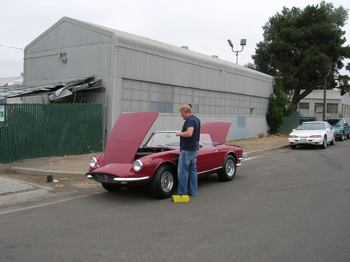 Tom re latched the hood, hoped that it had not been latched properly, and headed out. On the next bump, the hood popped open again, and this time we pulled off the freeway to investigate more closely. We checked the movement of the latch and its position on the catch. It was obvious a small adjustment was needed to keep the catch latched. Tom enthusiastically grabbed a 10 mm wrench and began loosening the catch before  I stopped him in mid turn. I warned him that if he moved the catch too much, the hood would not release at all! 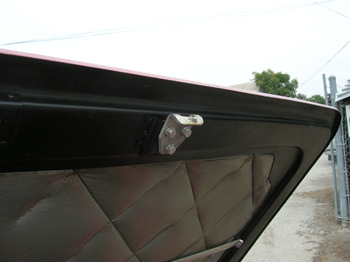 We made a small score mark to show the current position of the catch before I let Tom loosen the bolts. I had him move the catch 1/8 of an inch to insure the latch would still release. If we were in a shop, and not at the side of the freeway, we would have devised a more accurate way of measuring the draw of the latch, but we had things to do and places to be!

As the hood was dropped in place, I hoped it would release. I was so relieved to see it pop up when Tom pulled the hood release to test our new position!  We were soon on the way south with Tom promising to install a safety hook for his hood at his shop as soon as he got back from Monterey! 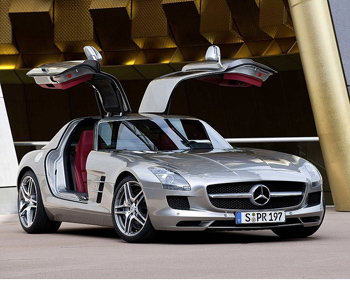 file photo
After picking up some tickets and auction credentials, Tom invited me to join him for a test drive of the new Mercedes AMG SLS. This car is a technological powerhouse with design cues honoring the Gullwing Mercedes from the 50s. The Company had several SLSs parked in front of Quail Lodge serving the queue for test drive appointments. After providing my driver’s license and signing something that probably gave them the rights to my house in trade if something went wrong, I was presented with a silver bullet of a car.

The first thing I noticed was you need to close the door before securing your seatbelt because if you have anything less than gorilla length arms you will not reach the fully opened gullwing door. I was told some kind of strap will be fitted to assist the reach of drivers on later cars. The same care was needed not to whack your head on the open door. I’m not sure if Mercedes is going to offer a valet to stand next to the car to say “mind your head” like they did at the Lodge!

This car has a 6.2 liter V-8 with over 570 horsepower, and it became obvious very quickly I was not going to expose many of these horses during the short drive down Carmel Valley Road. If you’re familiar with the area in Carmel the road to drive would have been Laurales Grade Road a little further down, but my Mercedes Rep made me turn around before making it that far!

This car featured the dual clutch automatic transmission which is another version of a manual transmission made to work like an automatic. The short drive in manual and automatic modes proved pretty seamless, but was hard to make precise assessments with such a short drive. I always wonder how journalists reach their conclusions after such short drives, especially when there is free food involved!

Even though the SLS is a two seater, the feeling is a wide bodied grand touring car. The passenger sits in what seems to be an arm’s length away, and is bridged by a wide console. The side door sills needed to accommodate the gullwing doors makes this car feel even wider. The originals had the fuel tanks in the door sills, but I’m not sure why the modern version needs to feel so wide.

But enough about the Mercedes, onto the rest of the weekend!

The tomyang.net Thursday Night Dinner was held at the Rio Grill, in Carmel. About 16 people joined us for dinner, and the conversation was lively. Some new faces joined the usual suspects and we all welcomed them warmly into the fold. Unfortunately, I did not get a photograph, so next year, someone has to remember!