I’m not a superstitious guy, but after 1000 posts, I had my first camera failure!  I was using my digital SLR, one that I used many times before, for Concorso which happened to be Friday the 13th! The pictures came up in camera preview, and seemed to be working fine, but when I tried to load them to the computer, something went horribly wrong. I think the card went bad, because nothing is showing up. I’ve tried just about everything I know to load these pictures, but I think they’re lost for ever. Luckily, I used my little point and shoot cameras for the other days out in Monterey, or else I wouldn’t have anything to show you all!!!

I spent the whole day at Concorso Italiano at the Laguna Seca Golf Ranch. It’s the second year this event has been organized by the new owners, and the second year it’s been at this golf course, and it has been getting better and better. People were still talking about the disaster two years ago when the previous organizers tried to hold the venue at an airport, but that weekend kind of weekend will never come back!

With the $400 ticket for Quail across town, this was the most value for the money at a quarter the price! The variety and volume of Italian machinery can only be found in California, and everyone was enjoying a beautiful day in showing their cars.

If I had only one complaint it would have been the “first come, first parked” arrangement of the cars. With Ferraris, there are a lot less older cars than the newer cars, so a spectator had a bit of hunting to find the Vintage Stuff. For the owners, if they wanted to speak to like minded Vintage owners, he had to leave his car. I feel if the owners have to leave their cars, they’ll close them up, and there will be no one to talk about the car for anyone visiting. Keeping the cars and the owners together allows everyone to enjoy the cars. I can understand the nightmare of parking all the cars en mass early in the morning, but why couldn’t they at least start pre ’72 Ferraris at the South end of the green, and new cars at the north end? Even though the north end would fill up faster and head to the south end, a smaller concentrated portion would at least have older cars in one area? Just a thought. 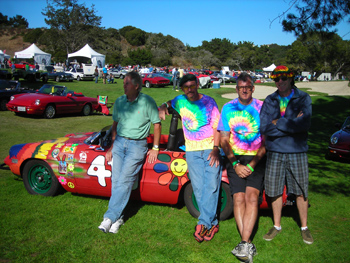 One picture I managed to take with my little camera was my friends with their Alfa Spyder Race car. Phil, Rad, Doug, and Dave, took this car to Thunderhill Race track the week before for their inaugural race in the 24 hours of Lemons Race. If you don’t know about 24 hours of Lemons, check out the website. It’s a great way to get into racing and not take yourself too seriously. The same went for entering this car in Concorso! From the positive response they got all day, the Concorso goers got it!

I got to drive this car on the roads around Laguna Seca over the weekend, and man is it fun! I was even offered a drive when they take this car to Buttonwillow in December for their next race….!