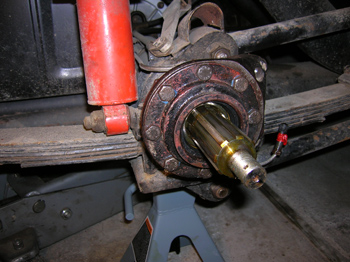 As I wait for progress to be made on my brake equalizer, I tried to address a pesky leak coming from my rear axle seal on the Ferrari. I’ve already changed these seals twice and they worked for a few months and began leaking again. It’s worse on one side of the car, but both sides eventually leak differential oil. The last time I changed out the seal, I chalked it up to a bad seal, and simply put a new set in, but this time I decided to take a closer look.

There are a bunch of places gear oil can leak from the rear axle area, and may of these surfaces need to be sealed with RTV silicone. When these parts were new and freshly machined, they fit together well enough to keep the oil in, but now after many years, these parts need a little smear of RTV to seal things up. I had inspected the source of my leak closely before, and found them still emanating from the seal and not from one of these machined surfaces. The seal can also be installed backwards, but I checked and double checked for the correct orientation. 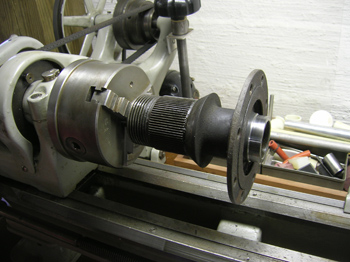 I took the brake disc off the hub and mounted the hub on my metal lathe to check for imperfections. I polished the surface of the hub that seals against the oil seal with light sand paper and a scotch brite pad. Sometimes a groove can wear into the sealing surface causing the seal to fail, but I didn’t see anything wrong. 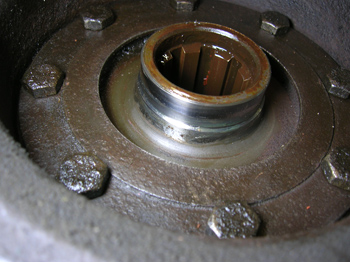 When I assembled the hub I put some grease on the sealing surface and set the hub on the axle. I noticed the area of the seal was riding very close to the end of the hub. I checked both sides and saw they were both near the end of the hub.

If you look at this picture again, you can see the seal carrier mounted on the hub with the seal near the center of the hub near the splined shaft of the axle. When the hub is installed on the axle shaft, the seal touched the backside of the hub where the seal is created. With the hub bottomed out on the axle, the seal was only touching the sealing surface by couple of millimeters. Could this have been the source of my leak? 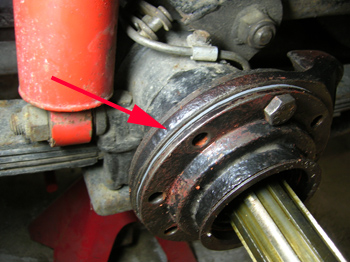 Having tried every other obvious fix, I decided to try shimming the axle seal out a little bit more. I checked to see of I had enough room to move the seal out a little bit and bought the thickest gasket material at the autoparts store I could find. The gasket measures approximately 1.5mm thick, and I hoped this would be enough to move the seal out on the hub for a better seal. I RTVed all the surfaces and put everything together. Let’s hope it works!

Reminder: I have a very nice Ferrari 250GTE for sale. Please contact me for more information.