The weather for the beginning of the 2010 Ferrari Club National Event was very very iffy. A huge storm was rolling up the East Coast, and it seemed no one would be spared. Thursday was the Concours and talk about several inches of rainfall may have scared a lot of people away. 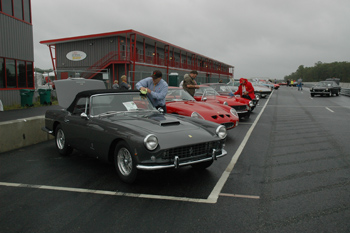 Those that prevailed were pleasantly rewarded with very little rain. A closer look at the radar maps, showed as if Millville NJ was under a shield that kept all the major rainfall away from us. Throughout the day, we heard reports of heavy flooding and power outages, but the FCA show went on despite the occasional gust of wind. 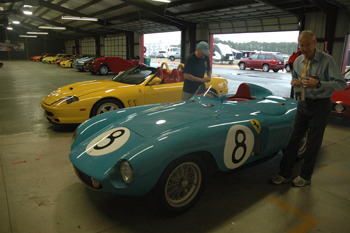 Some concessions were made for the open cars, so Admiral Phillips parked his 500 Mondial in one of the paddock garages for his judging.

The GTE was a featured marque at the FCA Event, but only two cars were present on the show field. Perhaps if the weather was a little nicer, more would have attended, but I was disappointed in the light turn out. If my brakes were fixed in time, I would have brought my car down! 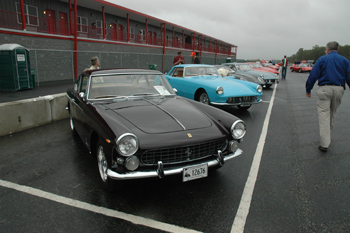 This nice GTE belonged to Phillip Fecher, and it had a purplish brown color that changed color as the light changed throughout the day. The camera was not able to show its true color. 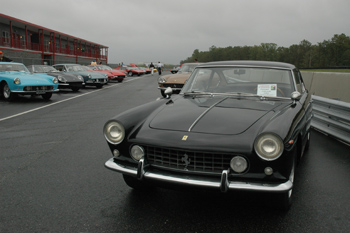 Steve Muzekari owns this GTE and it’s been at least 8 years since I last saw this car. My camera had no problem showing this car as black! 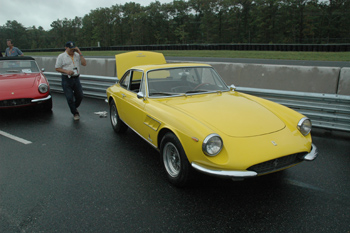 I met Bob Zambelli and his 330GTC. His name was familiar and I’ve heard it mentioned in Vintage Ferrari circles before. Bob had heard about this website, and was familiar with the web community. He’s owned this GTC for many years, and drove it up from South Carolina! He also claims this car has 165K miles without having a major engine rebuild! Who says Ferraris can’t be driven? 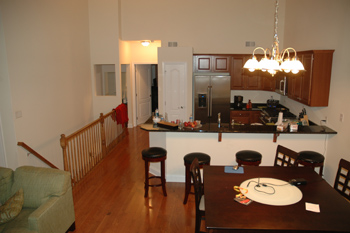 In the evenings we headed back to our track side Villa. Zac Dugger suggested the idea, and 7 of us pitched in to rent the house. It was a real “guy’s” weekend with Mark Dempsey in charge of the Menu. I think Bryan Phillips got scared from the lack of fiber in the shopping cart, and insisted on throwing a bag of apples on the pile of beer and frozen pizza bites. 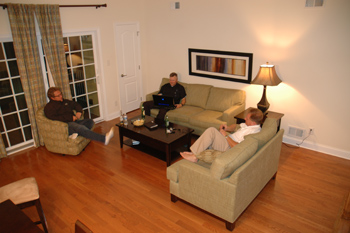 There was tons of room for us to spread out, and conversations lasted well into the evening. We all agreed having a house was so much better than having a drink on someone’s bed in a Motel room. From what we saw from the main road in Millville, we made the right choice.

After the Concours on Thursday, we were all having afternoon cocktails when the doorbell rang. “COME IN!” we all yelled down the stairs, but we heard someone come in and yell back “I NEED HEEELLLP! I NEEEED HEEELP!”
I went downstairs to see what all the commotion was all about only to find Buddy O’Bara in a near panic.
“I’m-in-the-middle-of-the-“Bella Machina”-judging,-and-my-cigarette-lighter-won’t-work! I need help!”
I called up to the guys to come down to help and found Buddy’s car in the driveway with Buddy anxiously holding a pack of Camels.
The “Bella Machina” award is given to cars with exceptional merit. They are tested for perfection in finish and functionality. The judge rides with the owner to test all the mechanical attributes of the car and their familiarity with the controls. One hour is given for this test, and it was during this hour test that Buddy discovered his cigarette lighter was not working. When asked how much time we had, Bob Weiner, the Bella Machina judge, informed us we had 42 minutes to fix the problem.
Zac and I unscrewed the console to get to the lighter while Mark got his multimeter. We soon found the lighter had broken a fusible link, but Mark had already removed the one from his car to lend to Buddy. After installing the working lighter, we had plenty of time to spare for Bob to continue scrutinizing.
As we all headed back inside, we took turns with our Buddy impressions: “I NEED HEEEELP!” 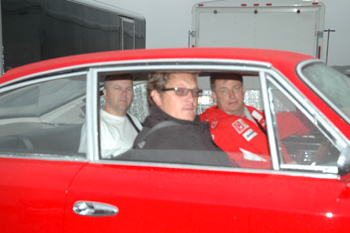 Friday of the FCA weekend was the road rally. The weather was blustery, but there was still a good turn out. I had a seat in Mark’s 365GT 2+2, but I had another idea. 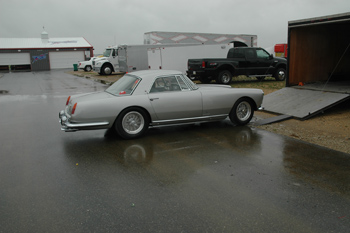 I talked Stephen Markowski to firing up the PF Coupe RPM brought down to the track. It was too wet for the 212, but the PF Coupe was perfectly weather proof for the ride. We had to wait until all the participants left the track so we could unload the truck, but caught up to the pack in no time. 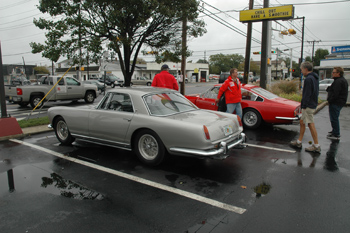 About half way through the rally, we met Mark and the guys and stopped for a bathroom break. Looking at the rest of the route, we decided we would rather back-track to Cape May for lunch. The Lobster House offered the perfect Lobster Bisque to offset this blustery day. 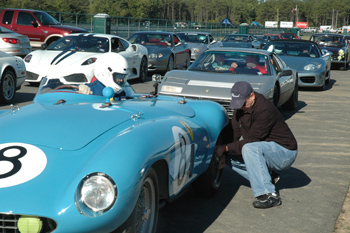 On Saturday, the sun came out and the Admiral was ready to take his 500 Mondial out during the track sessions. David Carte helped with last minute checks. 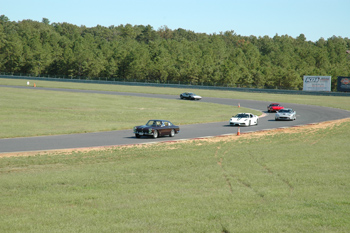 It was nice to see Fisher’s GTE out mixing up with her younger sisters. I was impressed with how little body roll there was in the GTE. 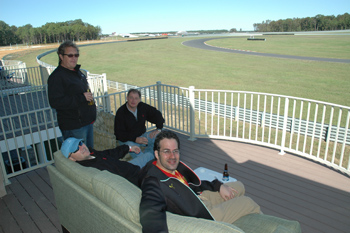 Our villa was just a 2 minute drive from the Paddock area, so we could easily run back to the house to watch the track sessions. Bringing the couch out on the deck made it very easy to sit back with a beer and watch the afternoon go by. 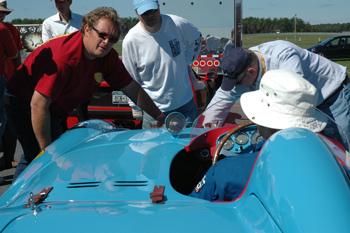 Just as we thought we were settling down for the day, we got a call from the track that the Admiral’s Mondial was having a coolant issue. We grabbed some water and a bathroom trash can to bring with us to the Paddock. A leaky hose clamp and steam bubble were the culprits, and the Admiral was back on the track. 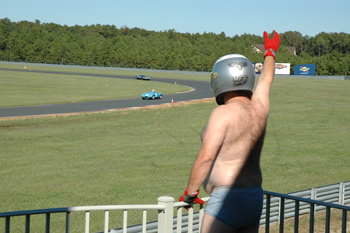 We soon returned to our beers, and cheered the Admiral with a special appearance by “Ricky Bobby.”

The FCA National event was a lot of fun despite the weather, and some of the food offerings. When you’re in the company of good friends, there’s very little that can spoil a good time. See you all in Savannah in 2011!