250GTO and Cobra at Monticello NY 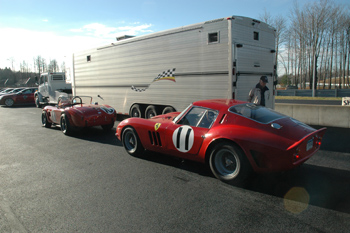 What a difference a day makes! The next day at Monticello Race track in the Catskill Region of New York State was a beautiful sunny day. Jim Burns from KTR unloaded the truck, while Jim and Sandy prepared to do some exploratory laps in their cars. We were surrounded by modern GT3 Porsches, and some newer street cars taking their laps around the track, but when the GTO and Cobra were unloaded from the transporter, people stopped to watch! 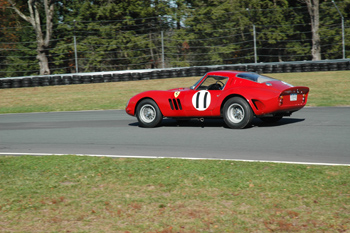 Sandy is usually the designated driver in all of their race cars, but was determined to get her husband behind the wheel of the cars. When Jim bought the GTO over 40 years ago, he drove it regularly on the streets of Staten Island, but these days the old race car gets most of her exercise on the track with Sandy driving. It was great to see Jim behind the wheel of his old friend. 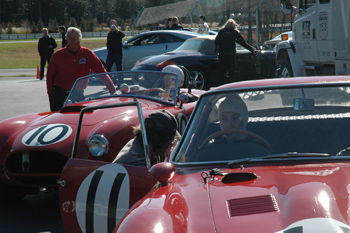 After several laps around the track, the couple swapped cars to have Jim try out the Cobra. This original 289 Competition Cobra is nearly as rare as the GTO, and just as spectacular of a car. As I helped get the two of them strapped in, I marveled how lucky I was to be with two significant race cars at the track at the same time. 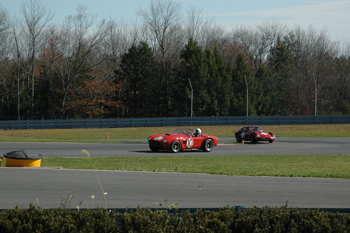 Watching these two cars on the track was like having a private review of history. The year was 1962, and Ford was just starting an all out fight with Ferrari at Le Mans that would last several years. The first punch thrown was Carroll Shelby’s 289 Cobra against the Ferrari 250GTO, and here were the two cars recreating a moment in history. What fun.

As the day wore on with big smiles on all of our faces, Jim asked if I would like to drive the GTO on the track! His generosity overwhelmed me, but my better judgment declined. I know what you’re thinking, “Tom, you idiot! I would have jumped at the chance…,” but I had several reasons I couldn’t do it. If it had been on the street for a short drive  I would have reconsidered, but on an unfamiliar track with a right hand drive car, not to mention driving a car beyond most people’s net worth, I decided to pass. It’s a decision I did not regret, and you might not either, because I decided to go for a ride in the car with Jim Burns, their mechanic from KTR. Jim was much more qualified to drive this car on the track, and I was able to record the drive for all of us to enjoy. Below is a short video of the day, but I have a much longer recording of the in-car footage that I may post at a later date.

As we loaded the trailer, I thanked Jim and Sandy for sharing this experience with me. It’s a moment that I will remember for a long time. Who knows, as the world changes and role of the internal combustion engine looses its popularity, we may see less and less of these cars going around the track for fun. I was lucky to have been there!