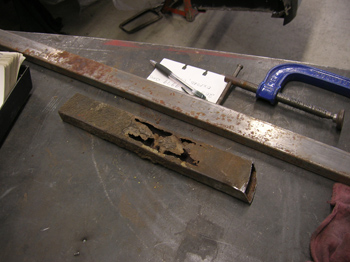 We decided to have the frame piece fabricated for the GTC. I stopped by The Panel Shop to see if they had some extra frame rail from a 365GTC/4 project, but we found it too thin in cross section, so we had no choice but to fabricate the new section. From the amount of patching to fix this part, it would be much cleaner and stronger to make a new piece. 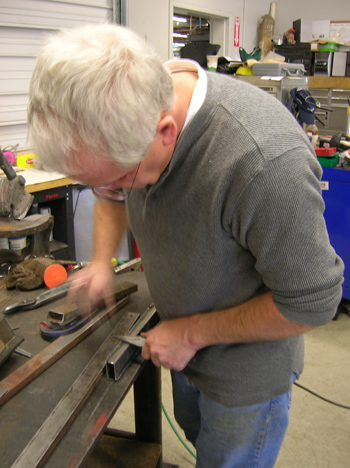 After careful measurement and bending, Mark formed two “L” shaped pieces of steel and welded the two sections together. After some grinding and sanding of the welds, it looked exactly like the part we were replacing. 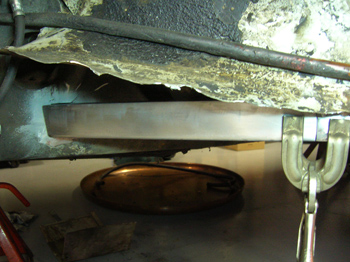 I brought the section of steel back to the shop for Jay, our welder to tack it in place. Jay was over last week to cut the section out and was going to fabricate the piece for us, but to save some time I had Mark make up the piece. Jay ground the remnants of the old brace out of the oval section of frame, fitted the new piece in it’s place, and tacked it in when the fit was perfect. 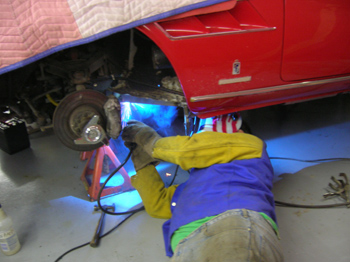 I watched as Jay welded to make sure no errant spark landed where we didn’t want it. We peeled the sections of sheet metal surrounding the brace so Jay could get his welding gun all the way around the piece putting a nice 360 degree weld. 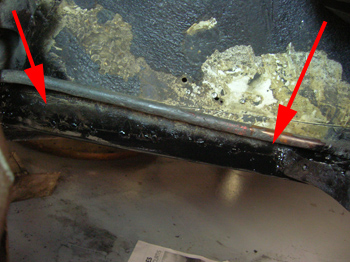 After the frame section was attached, we folded back the sheet metal that made up the inner fender area and Jay tacked the sheet metal with weld. We intentionally left most of these welds a little sloppy to match the original work. The work was stronger than original but the welding was made to look like no one had ever fixed a thing. Next week, I’ll paint the rest of this area and blend in some undercoating. No one will every know there was a repair, except for you, me, and the Internet! 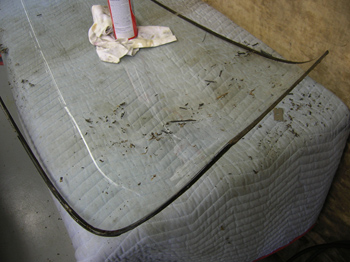 I began the tedious process of cleaning the rear glass to get it ready for a new gasket on the PF Coupe. The factory used some sealant had dried pretty hard after 50 years and it all had to be scraped off by hand. With a final cleaning of solvent, I was able to fit the new gasket and chrome trim back onto the rear glass. We like to leave these pieces together for while so the rubber, and trim gets a chance to “take a set” before installing it in the car. It’s also a safer way to store these pieces as a unit to avoid damage. 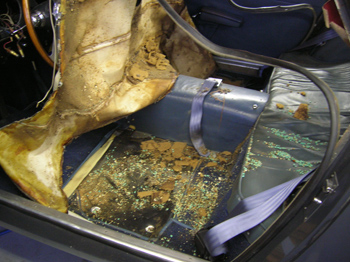 Speaking of tedious, I took a break from cleaning out the head liner area from a couple of weeks ago, but had no choice but to finish up the job. As the combination of mouse poop, mouse poison, and birdseed rained down from the headliner, I thought about the “glamor” of working on old Ferraris. I certainly wasn’t complaining because just last week I was riding around in an original GTO! In life, you’ve got to take the good with the bad. 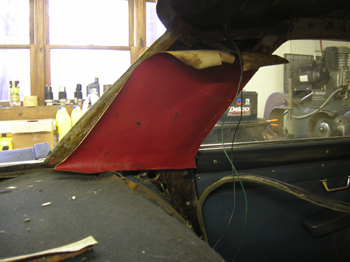 As I was working on the PF Coupe, I wanted to share some more interesting details on 1747. Behind the “C” pillar inside the car, was a panel covered with headliner material. It had a double layer of material, but on the left side of the car, the backing material was a bright red piece of vinyl. The right side had a second layer matching the usual headliner material. It looks like they ran out of material for the backing on the left side of the car, and used what was available. Someone may have said, “Hey, Antonio! Go over and-a grab me a piece of that-a red vinyl that no one is a ever going to order again, and we use that-a for the backing on this a PF Coupe!” 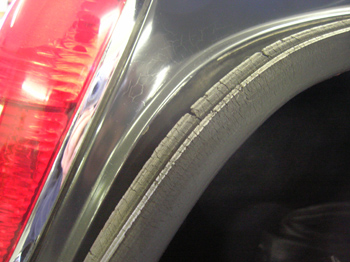 On a more serious detail is the orientation of the trunk seal. PF Coupes along with some other Pininfarina built 250 cars like GTEs have an “H” shaped rubber trunk seal with one side longer than the other. The trunk seal on this car is original, and probably never removed from the car, and it shows the longer side of the seal on the outside of the trunk opening. I’ve seen these seals installed incorrectly, or even the wrong seals installed. Pininfarina changed these seals for the 330 cars. 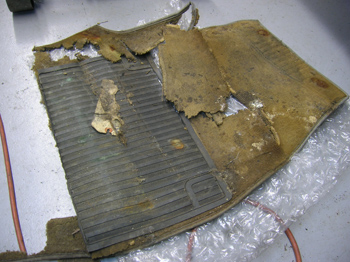 Francois and I have also been researching the carpet mats inside the car since we’ll be making new carpets for 1747. The original carpets were missing, so we’re trying to find original examples to copy. Francois recently had access to a PF Coupe with its original carpet mats that the owner no longer needed. 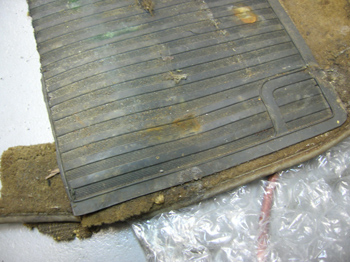 The rubber mat confirmed some of the research David, the owner, had already done on finding mat that resembled the original material and pattern. 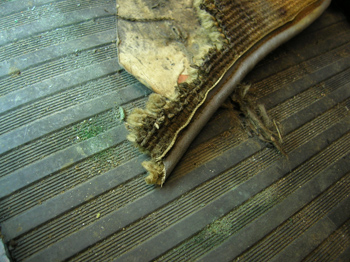 Another detail was the binding material which was usually vinyl which was confirmed with this example as well.