Progress on both 330s 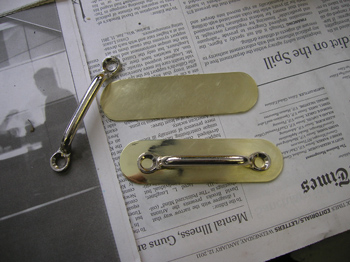 I’ve been working on a little project for the 330GTC, and it’s a great example on how restoration can take a lot of time. A couple weeks ago (Jan 31st according to the date of the photos), I began the process of fabricating some missing plates for the luggage straps on the back of David’s GTC. I had to wait for the footman loops I ordered to arrive in the mail before fabrication.

I found a brass plate at Home Depot used for an entrance door kick plate to be the perfect thickness and material for the piece (which reminds me I forgot to invoice for this part!). I cut, filed, and shaped the brass into the plates after taking measurements from another GTC. 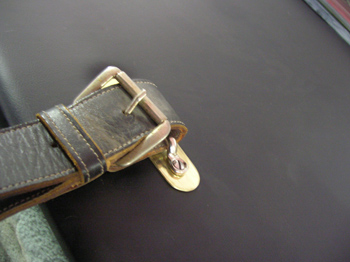 Next, I drilled and fitted the piece to the back panel of the GTC. 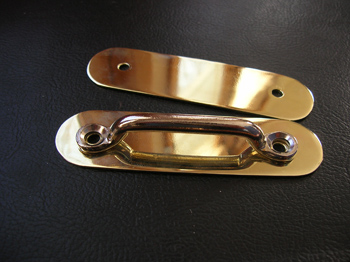 Once I was happy with the location of all the holes, I sanded and polished the pieces to a high shine. Since this was such a small job, I began calling a few platers we use and a couple of new ones to check prices.

Francois and I have a chrome plater that we use only for top top notch plating. He’s really expensive…no, seriously, really expensive. If you have to ask, you can’t afford it. His work is at the level you see at the top shows. The untrained eye might not consciously know why a particular car jumps out at them, and usually it’s the top notch paint and chrome plating. Sending these little plates to him was overkill.

I called Paul’s Chrome in PA to get an idea of price and turn around time. They said it would roughly be about $50 bucks and about 6-8 weeks to get it back to me….wait, she said 6-8 WEEKS!? My next two calls were to local CT platers that we’ve used. One plater was more than double that, but the other one was about $50, and could probably get it back to me in a week. Perfect, I popped the two plates in the mail, and thought nothing more.

A few days later, Francois and I were chatting and he asked if I heard about the roof collapse at one of our chrome platers…
“Which plater?” I hesitantly asked.
“Gabe’s”
“Oh Dear.” was my thought.

We’ve seen heavy snowfall this season in the Northeast, and flat roofed steel buildings are especially vulnerable to snow loads. During the work day, Carbon County Chrome’s roof gave way right over the plating tanks! Luckily no one was hurt, but two workers had to climb out of the wreckage.

A couple of days after the news, I received a package in the mail. Two brass plates dropped into my lap with a note from Gabe telling me he was essentially out of business until further notice. I felt horrible about his luck, and hoped he would recover from this disaster. I was very grateful he found the time to mail back my pieces, and that they were not in process when the roof collapsed. I was all ready to make two new pieces. Imagine if I had sent irreplaceable parts down there? 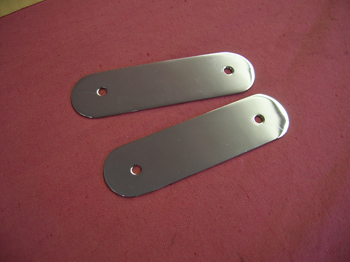 I called my second choice for plating which was more than double Gabe’s price, but was willing to turn it around quickly. In most business, getting things done quickly is a balance between time and money. The owner approved, and we sent the pieces out. They were done in one day, and I think they turned out fine. 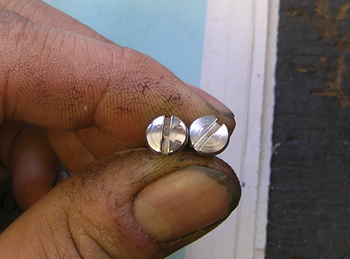 While we were struggling with the chrome pieces, I decided to take a short cut with the screws that would secure the footman loops to the panel. They are technically M4 slotted oval head machine screws. I had to go to specialty supplier to get these screws because the local hardware stores only stock Phillips head screws. I bought them in stainless and polished them to a shine. I think you can see the difference. The one on the left is polished.

Somewhere in my schedule, I have to make an appointment with my manicurist!

On a original Ferrari, most shiny trim screws are chrome plated steel. Many people replace these screws with polished stainless screws for many reasons. One reason is it’s a lot easier to polish stainless than it is to send a batch of trim screws for plating, not to mention cheaper. Chrome has a colder color however, and stainless is slightly warmer in tone. Nickel plate is even warmer. Stainless also will never shine as brightly as chrome.

Some people (hopefully concours judges) can spot the difference between a shop that went the extra effort of chrome plated screws over SS screws, but from what I can see at the shows, a lot of people are polishing stainless…but I digress. 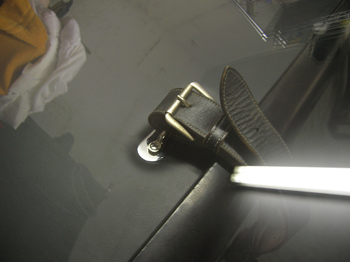 After a month of fabricating, polishing, shipping, and chasing down parts, this project is completed. Total billable hours were few, but I hope you can see how much work it can take to do one little thing! 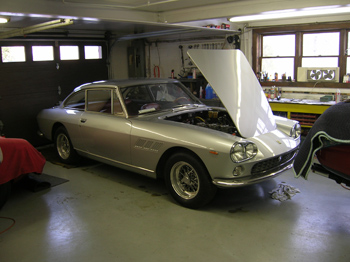 The 330 that arrive at our shop a couple of weeks ago is done with her valve adjustment, carb service, and ignition service. What a difference a little tuning can make. We found the popping and spitting due to dirty carbs, but that’s all a thing of the past. 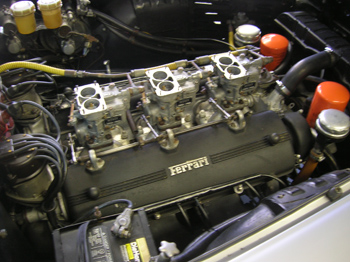 With the tuning done, this car is ready for Spring!