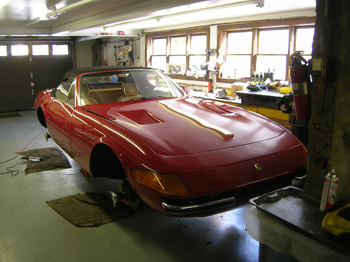 A new car arrived at the shop this week and I was excited to work on it. It was a Daytona Spyder, or officially a 365GTS/4. This is a fairly rare car with about 122 cars made officially from the factory. Back in the 80s, these cars were selling for double what Daytona Coupes were getting.  Quite a few Coupes had their roofs chopped off to reap the premium one would get when selling a convertible Daytona. Unscrupulous sellers would try to pass a chopped car for a rare original spyder, so care needed to be taken to tell the differences. This car was a legitimate Spyder.

We were asked by the owner to go through the car and basically do whatever was necessary to get it into the best condition it could be. He wants to enjoy the car in the eventual warm weather, so we began the service with a test drive.

Francois is very fond of Daytonas, and they have always been on his short list of Favorite Ferraris. He got behind the wheel of the car and we began our evaluation. We got about a mile from the shop when the car mysteriously cut out! After 5 minutes at the side of the road with Francois looking at the fuse panel, I noticed half of the electrics to be working on the car. I reached behind the ignition switch, and heard the fuel pump spring back into life. One of the connectors to the ignition switch had worked itself loose, cutting power to the coils and the fuel pump. We got the car started, and headed back to the shop with me holding the loose connectors in place while Francois drove.

With the connections better secured, we headed back out for the test drive. After only a few miles we found this car to be s very nice example. The suspension was set up correctly with just enough rebound in the shock settings to make the ride supple and not too stiff. There were small issues we found on the car and as we noticed them, I took notes to investigate later. After 20 minutes of driving, Francois pulled over to give me a chance to drive.

The first Daytona I drove was over 15 years ago when David Letterman let me drive his coupe. It was my first experience behind the wheel of a V12 Ferrari, and I have to admit I was a little nervous, but you never forget your first time. Wrecking Letterman’s car was definitely a factor, but taking control of such a powerful car was just as intimidating. At approximately 340 horsepower from 4.4 liters of displacement, this was a brute in her day. It may not sound like a lot of horsepower compared to 400 plus horsepower in a modern sport scar, but trust me it’s plenty!

After 15 years of driving other Ferraris and becoming familiar with everything from my 330 America to a client’s 275GTB, I was happy to be reacquainted with a Daytona. I was immediately reminded how heavy the steering was at low speeds. So much has been written about the steering in this Ferrari and how it gets lighter the faster you go that it has become the Daytona cliche. Torque and power abound with this car, and it pulls in all gears. Trying to idle along in 5th gear at 70 mph is near impossible. All she wants to do is speed up. Every time I get in one of these cars, I imagine what it must have been like to drive across the US at triple digit speeds with Brock Yates during the inaugural Cannonball Run!

It was too cold to drive with the top down in this convertible version of the Daytona, but I wondered if there was buffeting at high speeds. Convertibles elicit images of a passenger with her silk scarf gently waving in the wind, but I’m not sure if this is possible with 6 carburetors feeding this large V-12 engine in this Daytona Spyder! 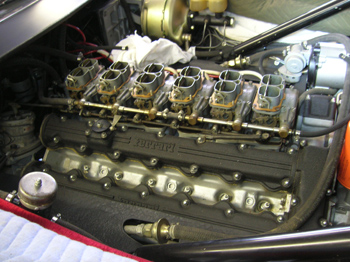 These four cam engines are pretty and is even better looking with the air cleaner removed. 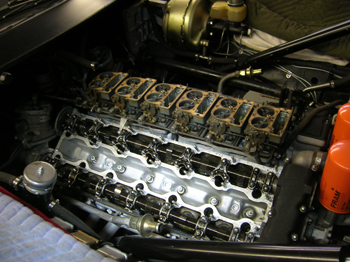 We did a compression check to establish a baseline on this engine. After that, I began removing the cam covers, measuring valve lash, and servicing the carbs. 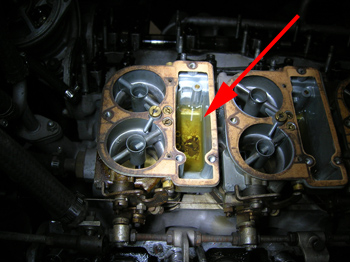 After removing the tops of the carburetors, we found a lot of sediment in the bottom of the fuel bowls. I cleaned out the trash, and made a note to replace the fuel filter in the back of the car by the gas tank. 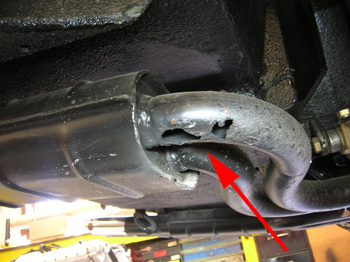 One glaring problem under the car was a sizable hole in one of the exhaust pipes. The ANSA exhaust looked pretty new, but moisture must have collected in this one area and rusted through the pipe. The repair was added to the list!