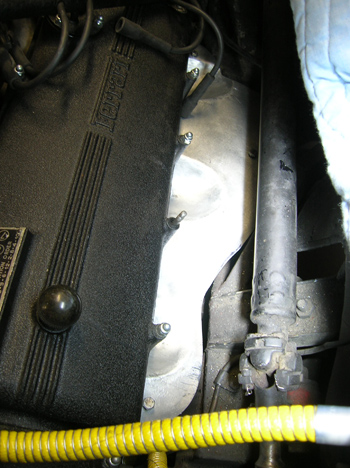 My day started out fine with the fitting of new exhaust shields I had made for the 330 GTC. After looking for several months for a set of used ones, we finally decided to have a set made from scratch by our fabricators. GTC exhaust shields fit very tightly to the headers, and no two are exactly alike in shape and fit. I got the new ones to fit very nicely before taking them out for the final time for some black wrinkle paint.

My next job was to turn my attention back the PF coupe I’ve been working on. We’re planning on taking her to the Ferrari Club National Event in June, and I had some detailing parts to install on the car. I decided to start with the most difficult piece first and that was the heater hose. We sourced the correct heater hose and I needed to replace the old hose inside the engine compartment. After removing the old heater hoses, I went to push the new heater hose onto the heater core nipple and it broke off! As I stared at the broken piece in my hand, I immediately knew the amount of work ahead of me to fix this problem. 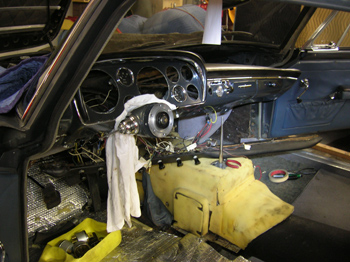 After discussing our options, we both agreed that it would be better to fix this this problem correctly, but I was not looking forward to the work! I tried my best to remove a little as possible to get the the heater core, but most of the dash had to come apart! I spent most of the first day cutting the crap out of my hands, and not getting very far. I went home pretty defeated. 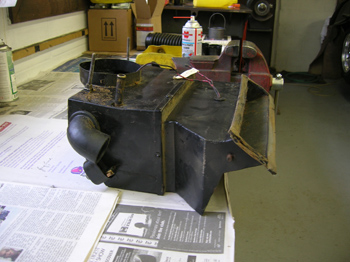 With a night to recover, I returned to the shop with a renewed vigor refusing to loose to this heater core! After an hour or so, I had the heater box out of the car. It sometimes helps to walk away from a frustrating project. 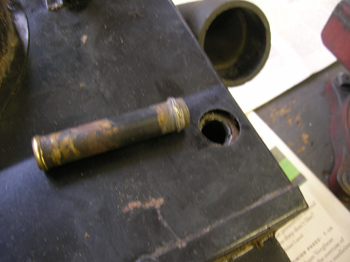 The nipple on the heater core was destined to break considering how little material was holding it in place. The solder around the nipple was showing signs of weakening, and if it didn’t break in my hand, it would have eventually started leaking. After 50 years of service, it was due for a repair. I pulled out the core, and took it down to our radiator guy for the fix. 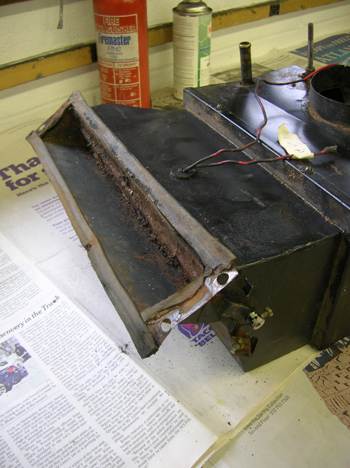