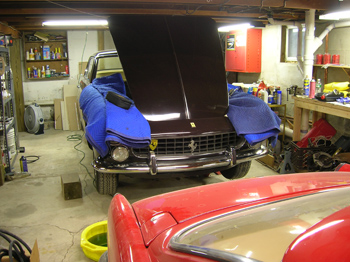 Michael’s 330 America is still at my house waiting for the wheels to come back from Cork Adams, and the booster from Karps. Since we were about two weeks away from getting wheels and brakes back, I decided to spend some time on the car and finish up the other work Michael wanted done on the car. 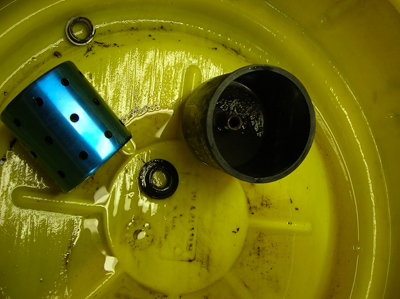 Last time I found a lot of crud behind the banjo fittings in the fuel fittings, so I wanted to change all the fuel filters. I drained the gas tank and was happy to find very little debris a the bottom of the tank when the plug came out, so new filters should be all this car will need to keep the crud out of the carbs. The fuel filter showed an old style filter, and a lot of rust collecting in the bottom of the filter housing. 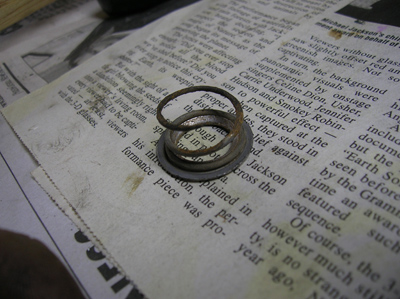 The bottom of the  spring inside the filter housing rusted away from sitting in sludge so I bet the filter was not sealing against the housing letting debris pass by the filter.  After an exhaustive search, I finally found a replacement at a local hardware store. The irony is the “big box stores” that edged out the small hardware stores didn’t have any springs at all! 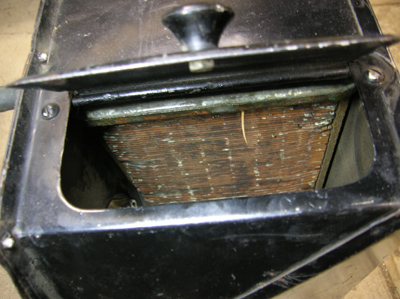 Michael wanted to put new heater hoses in the car. The hoses were so old that they were sweating out coolant through its casing. I warned Michael the risks of breaking the fitting off the heater core when changing the hoses, but we didn’t really have any choice. I carefully changed out the hoses several weeks ago and thought I had succeeded without any leaks, but as I was poking around under the dash, I felt something wet. I stuck my hand inside the heater box and found coolant collecting on the heater core. I knew what had to be done, but first I had to make the phone call to tell Michael the bad news. 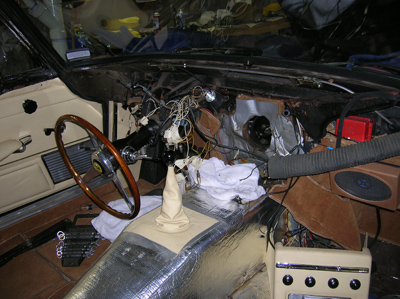 Michael seemed to be taking the news better than me, but we knew the only way to fix a leaking heater core was to remove the dash. I had just done the same job a couple months ago on David’s PF Coupe with exactly the same failure. I think these heater cores are reaching the end of their service lives. 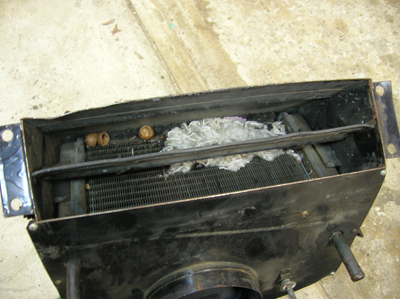 With the dash out, I got the heater core on the floor and found a nice little mouse nest sitting on top of the core. It was hard to tell how long it has been there, but from the amount of bedding I could see, the former resident wasn’t around long enough to move in a family. This was more like a little bachelor pad, a single bed and some snacks.  I’ll clean up the poop and bedding so when Michael turns on the defroster, he won’t get a face full of Hantavirus! 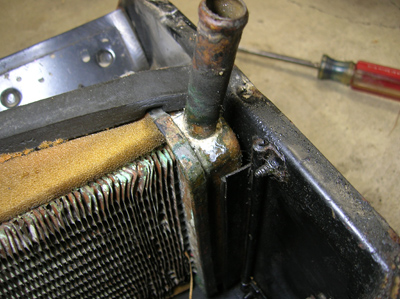 With the cover off, the leaking heater core was revealed. The white residue showed this joint was weeping fluid for a while, but the heater hose replacement only accelerated the leak.