You Can’t Get There From Here

This year I decided to head out a couple days earlier for Monterey. There’s a great car show in Carmel that I’ve been meaning to see, but it has been held on the Tuesday before the main Monterey weekend. Flying out from NY always takes an extra day or two of travel to insure a timely arrival, so I booked my flight to leave from NY on Monday afternoon.

As I was planning my trip to California, I looked forward to seeing the owner of the survivor 250GTE 2259 that he bought last Fall. He asked if I could bring the original tool kit out with me so he could have it for safe keeping. We decided shipping a rare and expensive toolkit for a Vintage Ferrari was too risky, so bringing it on a direct flight to CA would be a better alternative. I decided to check the overweight bag in with my baggage to avoid conflicts with the TSA.

I was greeted by a flight delay upon my arrival, but I felt the delay could easily be absorbed by the transcontinental flight. As I waited, I watched the flight getting pushed back, but was powerless in doing something about it. As we waited late in to the evening, Jet Blue finally loaded us onto the plane in an attempt to assure us were were going to make it to the West Coast. Unfortunately, sitting on an airplane without going anywhere didn’t belay out concerns. After an hour they admitted their ruse, and announced the flight was canceled! It was past midnight in NY, and due to weather, Jet Blue was not responsible for anything more than another flight out the next day, so we were welcome to sleep in the terminal!

Having a similar situation with Northwest several years ago, I made sure I was about the second person on line for a rescheduled flight and demanded anything to the the Bay area. I was shocked how ignorant the Jet Blue representative was with California geography. Sacramento and Long Beach were offered as alternative cities to land because San Jose was completely booked. I’m not expecting everyone to know the proximity of the cities in CA, but when you work for a ticket counter for an airline, it would seem to be a necessary skill.

With some insistence, I was booked on the first American Airlines flight to San Francisco at 7:30 am. The next problem was what was going to happen to my baggage? The head agent assured me my bags could be rerouted in the morning, but I felt keeping them in the Jet Blue system would be a safer bet. Most of the airport was closed, and the American terminal was definitely shut down for the night. The bags were tagged to SJC, and knew I would be back in the San Jose area to pick them up. “Marylin” took the baggage claim numbers and told me she would make sure they arrived in SJC on the next day’s flight. As she scribbled down the number, I wondered how trusting she could be. It was now 1am, the terminals were closing, and 150 people had to find a place to bed down for the night.

The joy of sleeping at an airport terminal should be avoided if possible, and I had my share to know that it would not be comfortable. I decided to take the last shuttle bus to the the long term parking lot where I parked my car and bed down in the back seat. At least I would not be woken up at 3am by the sound of vacuum cleaners! 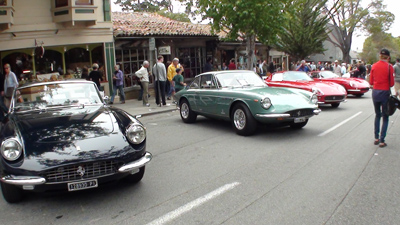 I relieved to finally land in San Francisco on Tuesday afternoon, but I only had a couple of hours to get my rental car and head to Monterey. The bags wouldn’t be arriving until that evening, but I wanted to try and make the Ocean Ave Show. I made it to Carmel to see the cars and meet some of the people that came to see David’s PF Coupe, but I was disappointed to have missed most of the show!

I handed my baggage claim tickets to the owner of the toolkit since he was headed back to the San Jose area that evening, and tried my best to do catch up with everyone in Carmel.

I got a call later that evening from the owner telling the bags didn’t show up in SJC! Great. I didn’t suspect the $10K toolkit was stolen, but if it was misplaced, what were the chances of recovering the value of the tool kit from the airlines? Since it was late, and I was well into a third cocktail, the task of hunting down the toolkit would have to wait until the next day!