I woke up in Monterey at 8am NY time, so I had an early start to call about my luggage. Besides a sleepless night over losing a Ferrari toolkit, I spent a lot of time trying to figure out how I was going to track my bags through the system. I contacted the Jet Blue Baggage Claim in NY and their search turned up nothing. I tried to track down the woman named Marylin that promised to take care of my baggage, but they wouldn’t give up her contact information. As the hours passed, I began to lose hope. 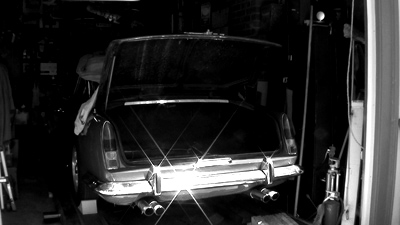 After a couple of hours on the phone, I went to see another GTE in the area. The owner had decided it’s time to sell, and asked me to help. It’s a decent car that needs some mechanical work, but it’s definitely a good car. If you’re looking for a GTE, let me know and I can send you the details. I apologize for the vague picture, but the competition to get these cars is pretty fierce, so I have to protect my interests! Despite being called foolish, my intentions are to find good homes for these cars with owners that intend to keep them as GTEs! I have a list of people who have asked me to inform them about Vintage Ferraris I have found, and if you want to be included, e-mail me.

After my visit with the owner of the GTE, I parked my car at a shopping center and began calling the airlines again. Because my original flight was transferred to American Airlines, I was told by Jet Blue I had to place a lost baggage claim with American. As my phone call was routed through the American Customer service center, I started to gain some hope. There were some clues that the baggage computers sent my bags through the American baggage claim system despite the Jet Blue tags. Marylin also didn’t do what she promised. The next step was to find which flight my bags went to SFO on, and hope that someone didn’t walk out of the airport with them.

As I was talking to American Airlines Customer Service, I got a call from SFO baggage claim. They had my bags and wanted to arrange delivery! I told them to hold them right there, and I would drive there immediately. There was no way we were going to risk losing these bags again! The owner of the tools and I met and made a dash for the airport. After four drives around airport ring road looking for the correct baggage claim area, we finally found the bags, and the tool kit was still inside. What a relief! We celebrated that night with a couple well deserved glasses of wine. I could finally begin my week in Monterey with a clear conscience!

The funny coincidence to this story was before I left my home, I was looking for the right book to bring with me on this trip. I picked John Steinbeck’s Grapes of Wrath as a fitting book about a family’s struggle with their journey west from Oklahoma to reach California during the Great Depression. Steinbeck’s California was a very different place than what we see today, although some of the struggles with farming still exist. Before my ordeal, I was interested in absorbing the descriptions of a California during a simpler time, but little did I know how trying my journey out west would find parallelisms with the Joads. It was also quite clear to me that no matter how hard it was for me to reach Carmel, or what I could have potentially lost,  it was nothing compared to a Steinbeck Novel!