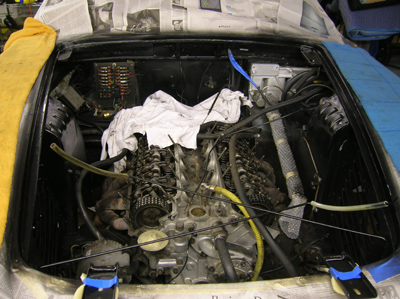 We have a Interim 330 in the shop where we’re detailing the engine compartment. The engine is strong, but the engine compartment really needed a freshening. Although this picture shows a lot of black, we stripped and sanded all the inner sheet metal, took off all pieces that could come off, and sent all the various pieces out for plating. Once the paint was applied, I pulled the old heater hoses off and replaced them with the correct spiral wrapped hose. The next step is to reinstall all the plated pieces that will give this engine compartment some contrast! 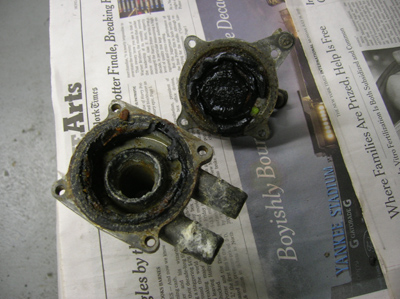 While I was replacing the heater hose, I took a look at the heater valve. It was stuck and needed closer inspection. Once I got the body open, I found the rubber diaphragm completely disintegrated. The leaking seal caused the valve to seize in the body of the unit. 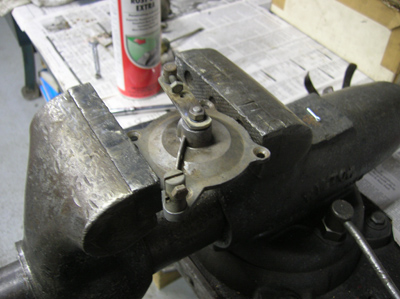 I used a torch to carefully heat the assembly while turning the valve. Eventually, it worked itself loose and moved freely. With a new diaphragm, we’ll be back in business!

When Francois and I talk about this car, I refer to it as an Interim 330 which is a name given to it later in life, so Francois had not heard of this term before. It’s much like when the 250 Pininfarina Coupe was simply known as a 250GT when it was new, the PF name was added later on to distinguish it from Boano and Ellena built cars. Since he worked on these cars when they were relatively new, he often does not use the newer distinctions to tell the cars apart.

When 330 cars were new, they were simply knowns as 330GT 2+2s, but as they aged, we categorized them in three separate groups. The Series I 330GT 2+2s had four headlights, and the Series II 330s had two headlights. The Series I cars had 4 speed transmission plus an English overdrive unit, along with floor mounted pedals, while the Series II cars had a true 5 speed transmission with modern hung pedals in the driver’s compartment. Soon it was realized there was a third variant of the 330GT 2+2 where the cars had the body of a Series I car, but the mechanicals of the Series II car, thus the “Interim 330” name.  With only about 125 cars made before Pininfarina built the SII body style, there aren’t many Interim cars about.  That’s a quick refresher course on Interim 330s! I have a spotter’s guide if you want to see more.