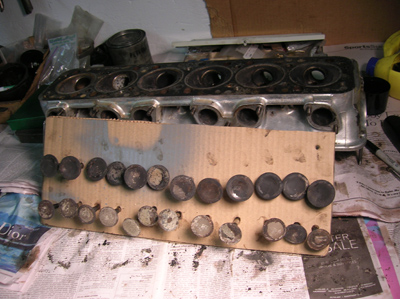 I disassembled the heads by removing the valve springs, keepers, shims, and valves. I kept everything in order on a piece of cardboard so if we found any irregularities in the head, we could inspect the correlating valve for problems. 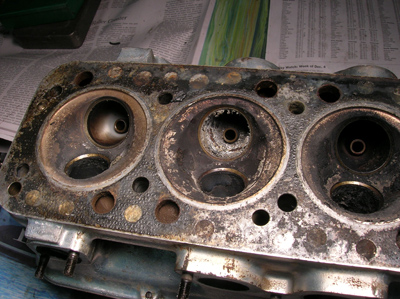 A couple of cylinders showed a lot of carbon build up which meant this engine must have smoked pretty badly before it was parked almost 40 years ago. 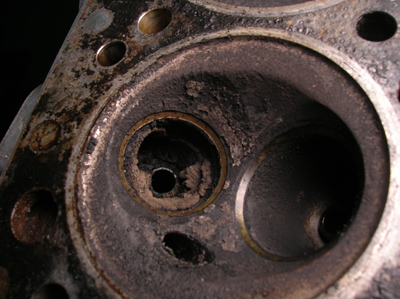 It looks like the head still had the original valve guides and seats without provisions for a valve stem seal. These guides would allow a lot of oil to dribble down the valve stem as the guide wore causing a lot of smoke. You can see how all this oil burned up near the exhaust valve (smaller port) leaving enough coke to nearly clog the exhaust port. 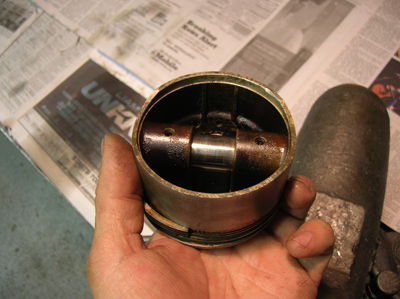 When I pulled the pistons out of this engine, I didn’t see the familiar shape I found in OEM Ferrari pistons, and when I showed Francois, he immediately recognized them as Nova pistons. He explained that “NOVA” was an aftermarket piston back in the 60s and 70s, and were common replacements for Ferrari engine rebuilds. 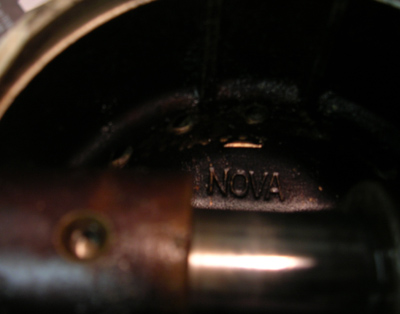 He showed me where to find the “NOVA” stamp underneath the piston crown. 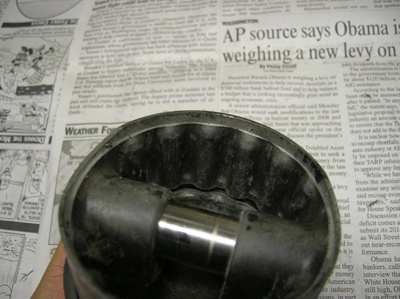 Borgo pistons have a specific rounded casting on the back side of the piston skirt. These were the original Ferrari pistons installed on these engines when they were new. 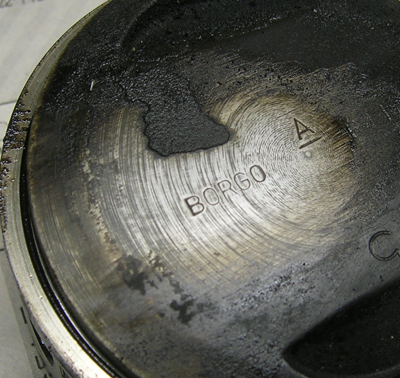 The BORGO stamp can be found on the top of the piston.

Modern replacements are readily available made by several manufacturers, but it’s fun to see what original and period replacement parts looked like. We also discussed why this engine received new pistons so early on. On closer inspection of the NOVA pistons, we found them to be standard 77mm bore for the 275cc combustion chamber, so the cylinder walls were not over bored. Francois’ guess was the the new pistons were an attempted cure for the smoking problem. The one piece oil rings of the original Borgos were replaced with the Nova pistons which used a three piece oil ring to try and stop some of the smoking. Unfortunately, nothing was done about the valve stems, so the engine continued to smoke.

New pistons, valve guides, seats, will be part of this standard rebuild. We’ll take some measurements and see what size replacement pistons will go into this engine and place our order in the next couple of weeks.

It’s just a couple more weeks left to the 2011 Tomyang.net pledge drive, and I want to thank everyone for contributing. It keeps me energized to bring you more every year!

I’ll be posting a list of contributors at the end of the drive, but I want to take moment to thank some of my customers for allowing me to share some of the work I have done on their cars for this website. Without their approval, this site would not have the variety of work and interesting projects to follow, and I want to let them know how much I appreciate their permission. I’m sure many of you out there can live vicariously in Ferrari ownership and repair through some of the cars I’ve written about through the last year, and owners of cars can learn what to expect when it is time to do the same repair on their own car.It’s a win win for everyone.

Donations can be sent via Paypal through clicking this button below, or sent to my paypal account: tom@tomyang.net

You can also send checks made payable to Tomyang.net LLC