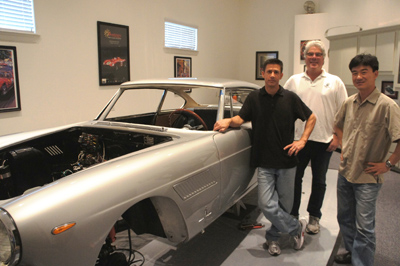 I stayed with Frank Botti just outside of Dallas for my visit to Texas. When Tom Wilson heard I was going to Texas for a fact finding mission, he enthusiastically joined us from Los Angeles.

I met Frank several years ago at one of Len Miller’s GTE Registry gatherings in Pacific Grove, California during a Monterey weekend. I was in the middle of assembling my 330 America, and Frank was watching very closely on the Internet because he was right behind me with his car! Frank bought his car locally as a hulk, missing the engine and transmission. A well known purveyor of Vintage Ferrari parts who shall not be named separated the engine to 5027 and sold off the remaining car to this buyer in Texas. Frank bought the project and began looking for a replacement engine. Not surprisingly, the same purveyor of Vintage Ferrari parts procured another engine from a Series I 330 to replace the one he previously removed!

Frank bought the engine, found a transmission, and has spend the last several years slowly rebuilding the car.

An interesting side story about Frank is that after we first met in Monterey and talked about our respective 330 Americas, we decided to exchange cell phone numbers to catch up with one another later in the weekend. As Frank read off his number to me, I told him he had just given me my own number, and I needed his number. He confirmed the number he gave me was his, and there wasn’t a mistake. When we looked closer, we realized we both as the same seven digit cell phone number with the only difference being our respective area codes! We marveled at the odds that two guys, nearly the same age, both owned rare 330 Americas, and had the same phone numbers. The probability is beyond a million to one! 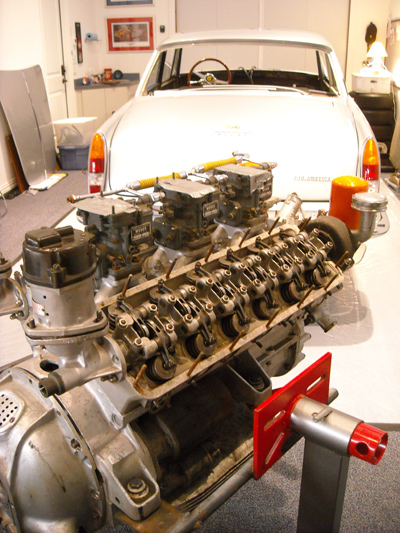 Tom Wilson, Frank and I spent a day poking around Frank’s car and parts piles. Frank never looked inside his engine after purchasing it, so we decided this was a good time to inspect its condition. With the cam covers off, we inspected the adjuster screws and roller followers and things looked pretty good. There were signs that someone had taken this engine apart in its past, but there was no outward signs of wear or abuse. 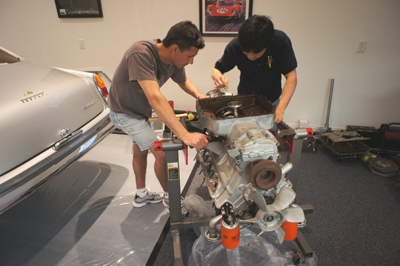 photo T Wilson
With the efforts of all three of us, we flipped the engine over to inspect some of the bottom end in Frank’s engine. I found cross hatching still on the cylinder bores, and brand new spark plugs with no signs of combustion. These clues pointed toward this engine being partially rebuild, but then hastily reassembled and never started. All the conflicting information only confirmed the need to completely disassemble this engine to determine how to completely rebuild it. 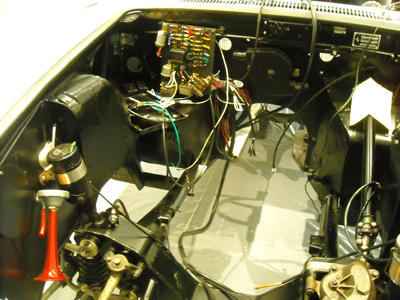 A new wiring harness was fabricated for this car, and I helped Frank as best as I could in routing the loom. It’s all looking very clean and neat. Good Job Frank!