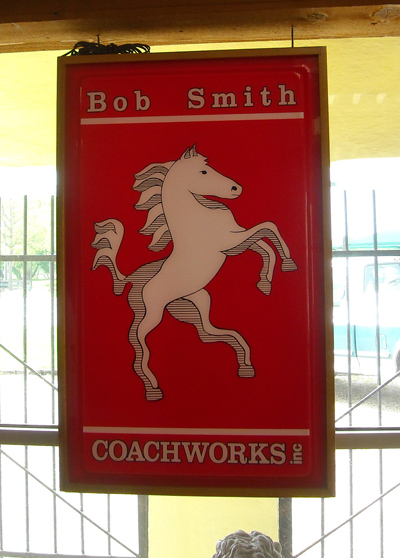 In January, I saw Bob Smith at Cavallino and we chatted about the usual Ferraris stuff when he invited me to come down to Gainesville, Texas for a full tour of his shop the next time I pass through Dallas. Coachworks is one of the premiere shops doing Ferrari restorations, and I couldn’t pass up the chance to see how his shop worked. Never having a reason to “pass through” Texas in my life, I decided this was worth a special trip. Frank Botti agreed to host my stay, and Tom Wilson decided to join us from LA. By the time we met on Monday with Bob, Greg Brendel, another Texan Ferrari owner also joined us for the tour. 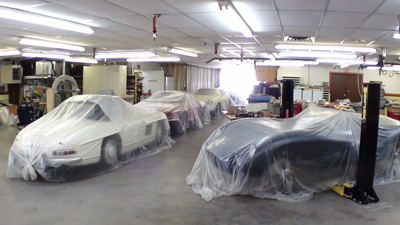 The shop was busy trying prepare a couple of cars for the Copperstate Road Rally, but under covers were many of their current projects. Needless to say there was some priceless metal under plastic wrap! 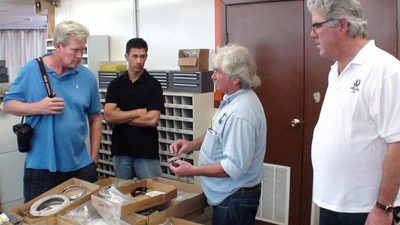 Between the constant demands of phone calls, Bob Smith (in the denim shirt) graciously answered all our questions, and showed us whatever we wanted to see. “I have no secrets,” Bob would say, and he held to his word! 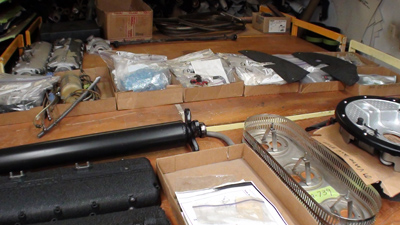 Everywhere I looked, there were neatly organized parts to several restorations, all cleaned, plated and painted. Just about everything is done in house so they could control the quality. I commiserated with Bob about how hard it is to keep good quality of my work when relying on outside subcontractors, and he simply gave me a big Texas grin! 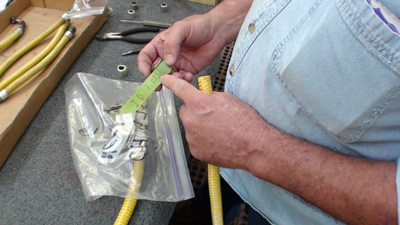 Bob’s attention to details and refusal to compromise drove him to manufacturing a lot of parts himself. Here he’s showing how he fits his custom machined fuel ferrules (that he plates in house) to Vintage Ferrari fuel hose. Other shops make do with sometimes ill fitting ferrules, but Coachworks eliminates these parts by custom fitting and plating each set! 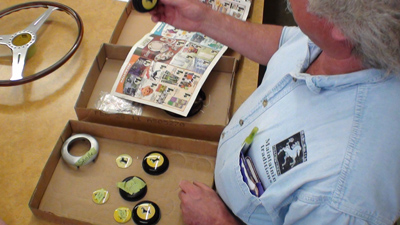 Another project Bob started making was the horn button for Vintage Ferraris. What at first glance would seem to be a simple piece of plastic with an inset horse turned out to an very complicated item to reproduce precisely. Others have marketed reproductions, and Bob was not satisfied with what he was seeing, so we decided to make his own. Each step required a specialized plastic or machining process that cost Bob more outlay in R&D. By the time his first run of horn buttons were ready for market, he had spent $80K! The results were perfect, and I immediately spotted the superiority of the Coachwork’s button over the current repops on the market. I asked if Bob was going to make his investment back, and he said, “someday!” 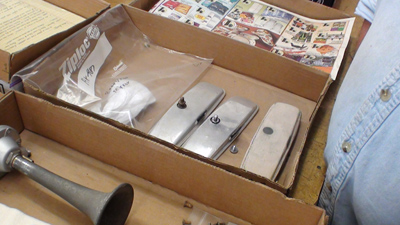 Another technique Bob showed me was how they make fixtures to hold items for buffing. Everything from aluminum, stainless steel, to the chrome plating process require some kind of buffing, but on small pieces, one mistake with a buffing wheel and the part could be irreparably damaged. Coachworks avoids these disasters by making form fitting bucks for the piece that needs to be buffed. Mounted to these bucks the parts stand a good chance of getting the best possible shine without the risk of the buffer sending it flying across the shop! 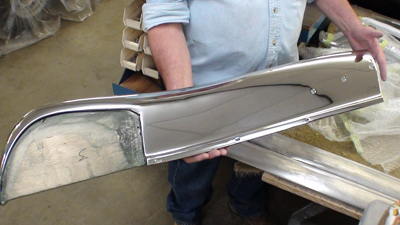 The level of shine they achieve was amazing. Bob showed us this stainless steel bumper that was polished so well, it looked like chrome! 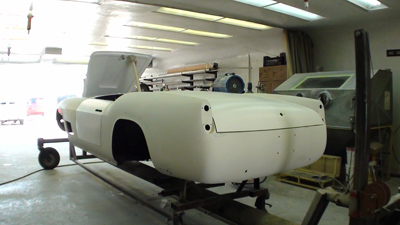 The paint shop was prepping a couple of cars for paint, and this Cal Spyder was in the early stages of primer. 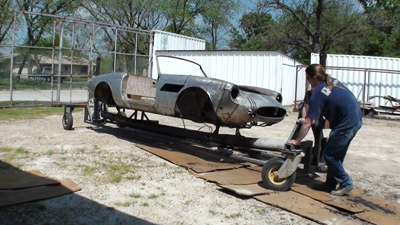 Outside, they had a 330GTS mounted to a rotisserie and they were maneuvering it into position for some more paint stripping. 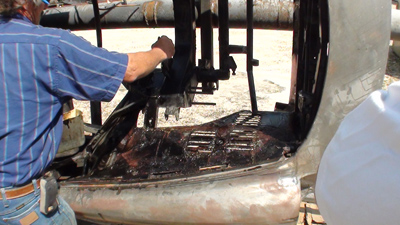 Bob’s brother got to work stripping the engine compartment in the hot Texas sun. Being outside sure helped keep the fumes away! 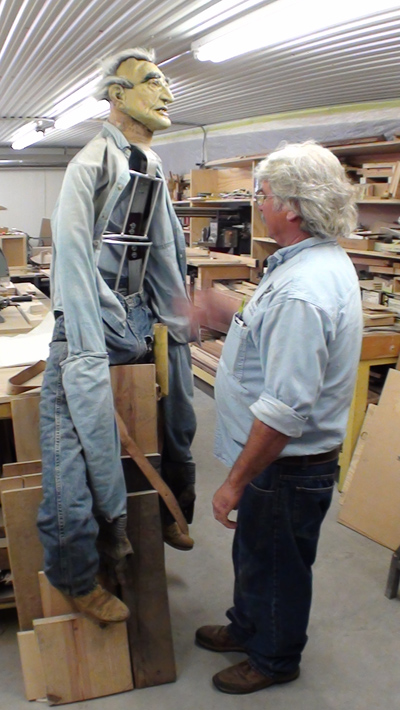 Mixed in with all the Ferrari parts, there was something that was definitely not Ferrari! Bob introduced us to a prototype nicknamed “Bub,” and was a preview to Bob’s other love, Horses. With a crew of talented fabricators, machinists, tinkerers, and a full service shop, Bob brought in a project to make a “dummy” to ride on the back of horse they’re trying to break on his ranch. Bob explained young horses need to to get accustomed to something on their backs before a human tries to ride it for the first time. No one wants to get thrown from a panicked horse. His trainer’s dummy was very heavy stiff and Bob saw room for improvement. This was his first prototype that was 50 pounds lighter and with an articulated mid-section. I could see Bob’s insistence of doing things the best he could was inherent in everything he did, and our tour was only half way done!