Some of you got a hint of my hunt for a 330GT on facebook, but here’s the full story!

I just landed in Newark Airport in New Jersey returning from Dallas when I checked my e-mails and found an interesting message from someone who just purchased a 330GT from an estate sale and was wondering if I was interested in buying the car! It was after midnight, but I shot off a definitive “yes” in my reply and headed for my car in Long Term Parking. 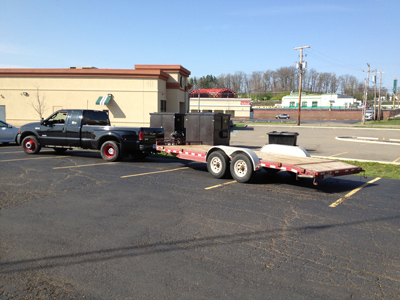 I woke up the next morning and called the Ohio number to find a dealer had bought the car from an estate in Michigan. The dealer usually sold modern sports cars, so had no idea what the car was worth and was looking for advice and a buyer. I was torn with being put in two positions at the same time. The truth may have worked to my disadvantage when it came time to buying the car, but I decided to stick to my morals and be honest. I gave him a wholesale and retail number, and he seemed agreeable to the amount. I told him to send me some pictures and I would call him back. I immediately called a friend for some advice. The advice I got turned into an offer to bring his truck and trailer to go and get the car! We met 12 hours later to drive all night to arrive in Ohio at 9am sharp. 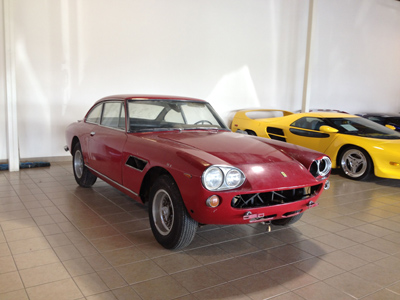 The story was the previous owner was an elderly man that was recently put in hospice and his estate was liquidated by the family which included his 1964 Ferrari 330GT 2+2. It didn’t look like the car had been run in years and some crude metal work was being done on the driver’s side rocker panel. A lot of the car was disassembled, and thrown into the car for transport. My friend and I pulled all the pieces out and took inventory. I made mental notes on what parts were crucial and irreplaceable, and ticked them off the list when I found them. 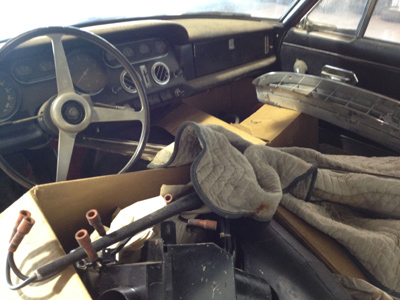 Everything was mixed together, but as I sorted through the pieces, I started feeling better when all the parts added up to a complete car. Even things I initially saw that were missing, like the horn button in this picture were quickly located. Often times cars like these lose easily pocketed items only to become expensive items to find for the next owner. 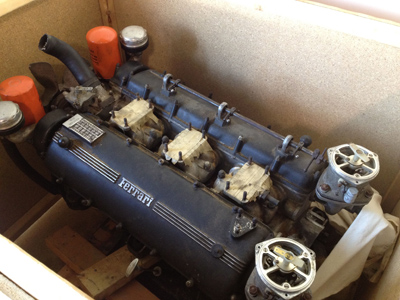 The engine was in a crate, and the carburetors were nearby, so I basically found a complete car ready for restoration. Unfortunately, the tool roll was nowhere to be found, but these things are often lost. 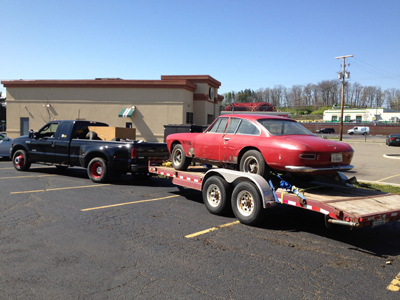 After some negotiations, and my regret for being honest about the wholesale price for this car, we agreed to a price, loaded up the truck, and headed home.

Our plans are to sell this car complete as a restoration project. We all know these cars are worth more money in pieces than as complete cars, but I would rather make a little less money on this car by selling it to an end user that will restore this car than part out all the pieces. Four headlight Ferraris are powerful, fast, V-12 cars that were hand built while Enzo Ferrari was still involved with production of the road cars, and I believe decent cars should not be so readily parted out. If you need more persuading, look at Bugatti Automobiles which has a very similar Patriarchal story like Ferrari. Not all Bugattis were desirable back in the day, and many were converted or parted out over the years, but as people realized how few were made and how special the connection all the models had with their maker, ALL Bugattis became valuable. I see the same with Vintage Ferraris.

This car is Serial Number 5559, which Kerry Chesbro shows to have possibly two owners. The car comes with its matching engine and drive train, wire wheels and spare. It’s red with a black leather interior, but will need a full restoration. The left rocker and door post will need some rust repair, but the right side of the car seems more solid. My friend has the car listed on Craig’s list, and had already gotten a lot of calls. He will be showing it over the next couple of days. If you’re interested in the car, we’re selling it for $55,000. If you’re interested, feel free to contact me for more information, or look up the Craig’s list ad. The car is currently in New Hampshire.