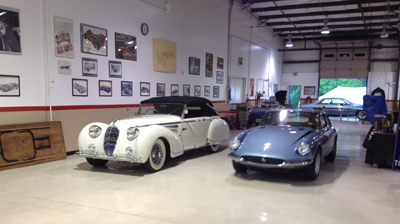 I arrived in Radcliffe Motorcars on Friday morning to begin preparing for the 5th annual car show that I co-host with Radcliffe Motorcars, but the real preparation began months ago when Richard and Patti Garre began accepting registrations for cars and vendors for the show. Putting on a show takes a extraordinary amount of time and effort, and all the work really begins to coalesce in the week before the event. 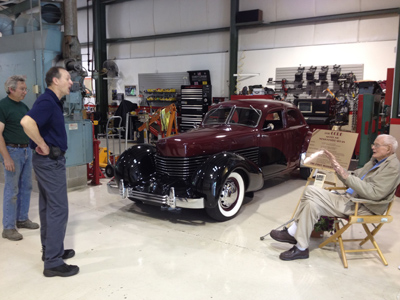 Between cleaning the floors and jockeying the cars around, we all stopped what we were doing to load in a special car for a special owner. Rick Reeves, a Pantera owner who brought his car to our show for several years, told us about his father and an 810 Cord he wanted us to consider showing at the event. Richard and I enthusiastically agreed to put the car inside the shop for a prominent space. The father and son drove the car down on Friday to set up for the show.

I had a chance to speak with the Senior Reeves about his car, and learned about his fantastic story behind this 810 cord. Richard Reeves is 93 and remembers he and his childhood pals sitting in front of the dealerships admiring the revolutionary1936 810 Cord when it was new! That initial seed of desire finally sprouted over 30 years later when Reeves found an 810 for sale in the Maryland area in 1969. He purchased the car, repaired what was necessary, and drove it around town with the kids.

After a couple of years of ownership, someone spotted him driving the car and offered to trade him a 300SL convertible plus cash for his old worn out Cord. Reeves couldn’t pass up the offer, and soon found him in a “newer” car without looking back.

About three years ago, the junior Reeves, now into Panteras and muscle cars, thought back to his childhood and the Cord. Knowing his father was still wistful about the old Cord, Rick started looking for an 810 on e-bay. He was surprised to find not only an 810 listed locally on the auction site, but also on further research, found it to be the the same one his father traded away over 40 years ago! A price was reached for purchase for a car that had barely changed from when it was sold 40 years ago, and reunited with the father. The search began for a restoration shop to take on the work and Mr. Reeves looked up the young men that worked on his car in the 60s. He found they were now in their 70s, retired from the auto trade, but willing to work on his car! After a few years of restoration, the 810 was finished, and Richard Reeves is a very happy man.

It was great to have the 810 at the shop, and to have Mr. Reeves share his story with all the automotive enthusiasts that came to our show. I would imagine at 93 there’s not much that can excite the soul, but seeing how giddy Mr. Reeves was the day before the show, and how happy he was to share his story, it was a good day! 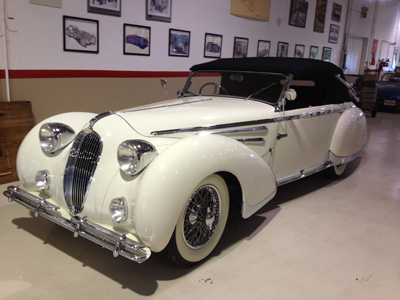 The 810 was not the only classic car at the show this year because across the shop was Ed Windffelder’s Delahaye! This car was among its peers on the Lawn of Pebble Beach  in Monterey, and we were honored to have it at our show. This Drop head coupe was stunning, and it was treat to look at the French coachwork from the 40s. 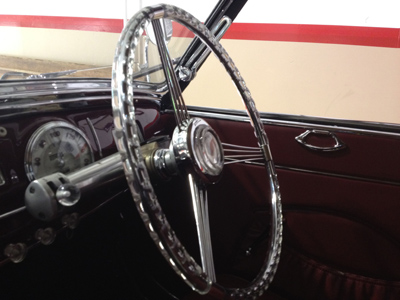 I managed to spend a good bit of time chatting about the car with the owner, who has owned this car since the 70s. I marvelled at the details loved learning about how this car was  restored. The steering wheel and control knobs came in clear plastic, a material not commonly found in the 30s, and the original pieces had yellowed and cracked over time. All these pieces knobs were remanufactured, but the steering wheels needed a little more work. The inner steel rim of the wheel had to be cast inside the clear acrylic after it was chrome plated. There are only a few places where something like this can be done, and Ed had to send it to Pennsylvania to have it custom made. The results are beautiful, but being a automotive restorer myself, I recognized the monumental task of recreating a steering wheel such as this! 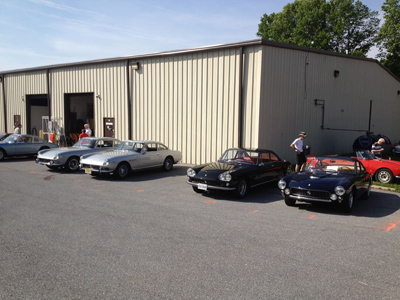 The cars started rolling in about 8 am despite the 9am start time, and we filled up quickly. I marked out about 75 spaces for registered cars, and we were fully booked a week before the show, but we tried our best to squeeze in as many extra cars we could. As usual, we had a strong showing of Vintage Ferraris, but were easily balanced by a nice collection of modern Maseratis! 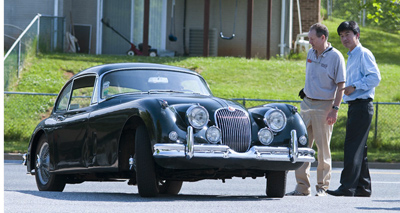 photo K. Visser
Richard and I ran between greeting arrivals, to helping the vendors set up inside the shop. Each year it gets a little easier, but there was always something that needed our attention immediately! 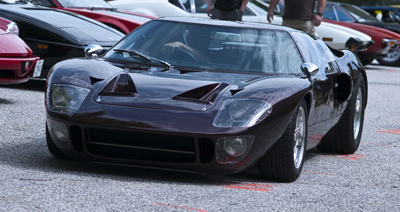 photo K Visser
I absolutely love the variety of cars that shows up for this event. It’s neat that one side of the parking lot has big displacement, rumbling V-8s….

photo K. Visser
…while the other side has small displacement wailing V-8s at the same show! 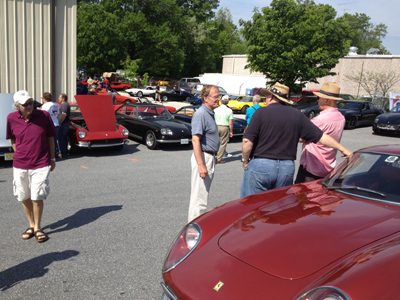 As this show matures, I am proud of the friendly atmosphere this show conveys. Old friends gather to share stories about their cars, and new ones are introduced into the group. At other shows, there is always the pressure of judging or the desire to win an award that causes owners to be a little on edge. Conversations with admirers are short and seem less enthusiastic because of this stress. At our show, there are no awards, so it’s a lot more relaxed. People bring their cars to share with the other enthusiasts not to compete with anyone for the spotlight. The spectators that our show attracts are also very knowledgeable of all the cars that are gathered, so the questions and discussions I overhear, are not filled with the usual “How much is this car?” or “How fast will it go?” Instead, I hear, “So how does the “Pre-selector gear box work?” or “Are you still getting the vapor lock issue with the new fuel pump?” I feel it is the perfect blend of a “Cars and Coffee” event, “Shop Open house,”  and a “Concours D’Elegance!” 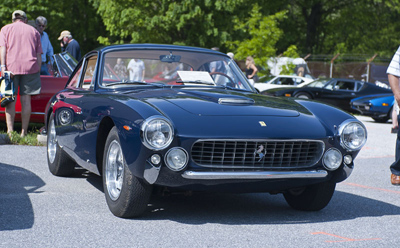 photo K Visser
I want to thank Richard and Patti Garre for their hard work co hosting the event. Without the generosity of their time and efforts, this event would not have grown into the size it has. David Waltos deserves credit for tirelessly working the front gate. Receiving and parking over 90 cars is no easy task, and I never hear a complaint from anyone despite the full capacity crowd. A tip of the hat goes to Rich Poelma, Richard’s right hand man when it comes to working on the cars. He is in the background making sure the cars are ready for the customers and is always ready to lend a hand! There is also a crew of friends and family that come stop by on Friday that help from Sam Hallowell to the Meehan Family, and we appreciate all the help that is offered. Pounding in tent stakes becomes a lot easier with extra hands! The final group I’d love the thank is everyone who joined us on Saturday for the show. Without the cars, the owners, spectators, and combined enthusiasm to support a show like this, we could never grow to where it is today. We thank you all for coming down and celebrating what I know will be an event that we all will look forward to having for many years to come. Bravo.