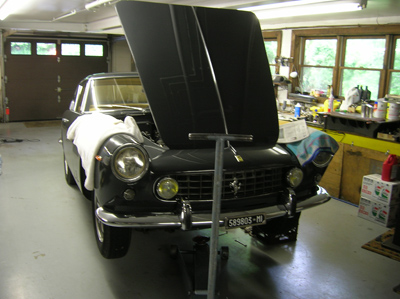 The final push to get the survivor GTE is on it’s way. We need to put some mileage on this car before we send it across the country to its owner. We want to make sure this car needs nothing before we send it out. During the drives, Francois has not been happy with the brakes and we needed to find the root of the problem. 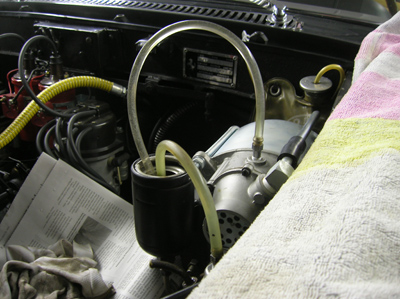 The brake pedal was very spongy, and on very hard braking the pedal would nearly end on the floor. The first task was to make sure there was no air in the system. The floor hung pedals can trap air in the system because the Master cylinder is below the power brake booster. Getting all the air out of the booster is done through the bleeder screws on the booster.

Unfortunately, the results of our thorough bleeding only marginally improved the brake feel. The next step was to eliminate each component to find the root of the problem. Even though the brake system was rebuilt by Karps Brake Service, you never know with 50 year old components. After individually blocking off just the M/C, then adding the booster, we found both of these components working perfectly. The next piece to the system was the mysterious brake equalizer mounted below the radiator. This unit was different from the aluminum one I did all the research with on with my car. When we added this unit back into the system, all the sponginess returned. I consulted Ron Karp on the unit, and we talked about its operation. After looking at the proportions of the internals, we saw how obvious the amount of pedal travel was needed to move the front brakes. Ron and I agreed that this unit was probably added to keep the rear brakes from locking up before the front brakes, but instead of limiting pressure to the rear brakes, Ferrari decided to add this unit to increase pressure to the front brakes. Unfortunately to increase pressure, more fluid was needed to move into this equalizer causing the spongy pedal. We felt even with new seals in this unit, there was an inherent design flaw in this system. Francois had a problem with one of these units in the past, and his solution was to bypass the unit with a Tee, but I wanted to see what other shops had done. My next call was to Bob Smith in Gainsville Texas. Bob has worked on many of these early 250 cars with this type of brake equalizer and he too had by passed the equalizer on several occasions.

Looking at our system, we decided to try removing the internals of the equalizer making it essentially a Tee to see how the brakes would react without any equalization. After a thorough bleeding, we found the brakes to be much better. The pedal feel was improved, and the brakes were not locking up except in extreme pressure. We felt this was a better option than a spongy pedal without any reserve pressure.

Ferrari was a small production manufacturer in the 60s and Disc brakes were only recently added to their cars when this GTE was built. Using British manufactured Dunlop parts on Ferrari road cars was new for the company, and I don’t think they got the first system right. The second generation system on my car is better, but I don’t think Ferrari road cars had good brakes on their cars until the late 60s! When you read stories about Enzo Ferrari resisting the use of disc brakes on their race cars in the late 50s, you can see how this affected their installation on their road cars as well. During my conversation with my customer, he said, “As Bruce Trenery (of Fantasy Junction) is so fond of saying, ‘there is more R&D in a Toyota ash tray than the first thirty years of Ferraris'” 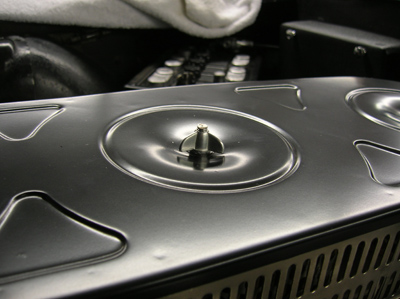 I also worked out some minor details like the air cleaner studs. The air cleaner was missing on this car, but I manged to find one. The studs however, were a little high for the nuts, so Francois asked me to trim them down a little. Even though this car is not a concours restoration, Francois likes to send these cars out with a certain level of perfection. 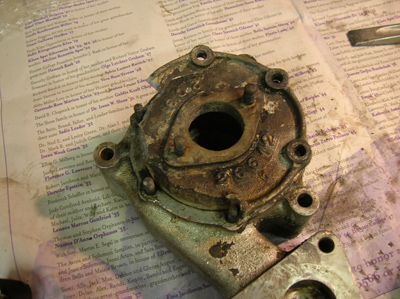 We finally got the front cover off the water pump from the 330 engine we’re rebuilding. It took a lot of heat and force on the aluminum plate. 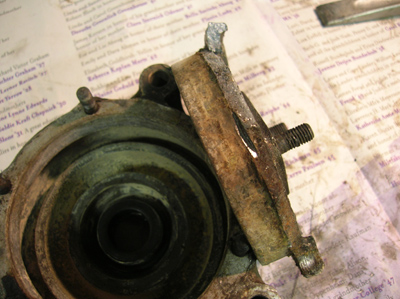 The plate had already cracked in a previous repair, and our removal didn’t help either. As the part finally came off, I was trying to think of a solution to repair the damaged plate. Luckily, I believe our problem was solved after one phone call to Geof Ohland at Partsource. He said he had NOS 330 water pump in stock and would send it to us to try on for size. I’m not dancing for joy until I make sure it fits our water pump housing, but this will save us a lot of trouble fabricating or repairing the original piece! 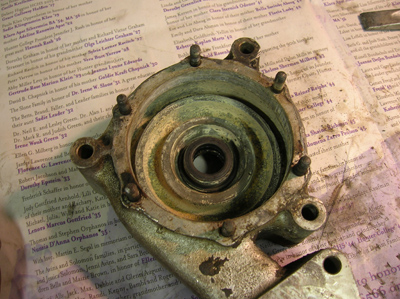 Luckily, the housing was not damaged during the disassembly, so we’ll see how Geof comes through. Someday these parts will have to be recast and remanufactured because with every rebuild, these cores will get worse and worse. Does anyone know of anyone making them already? 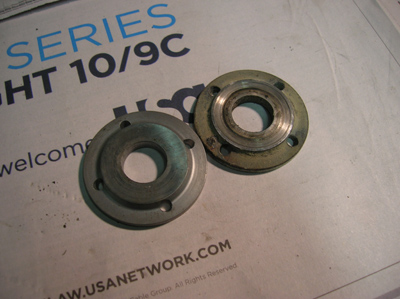 The water pump impeller plate needed replacing as it showed excessive wear. The old seal had worn a deep groove in the old plate (right) and would never have bedded into the new seal if we didn’t replace it. 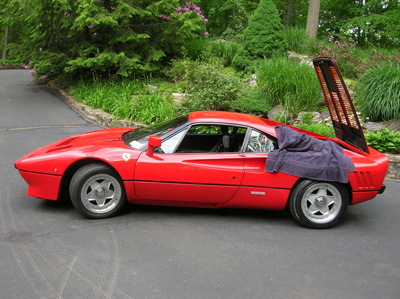 A 288GTO arrived at our shop with a bad fuel leak. After it was unloaded from the truck, Francois asked me take a look in the engine compartment to see where there fuel was leaking from when he turned on the key. As soon as I heard the fuel pump turn on, I yelled, “Turn it off, Turn it off!” 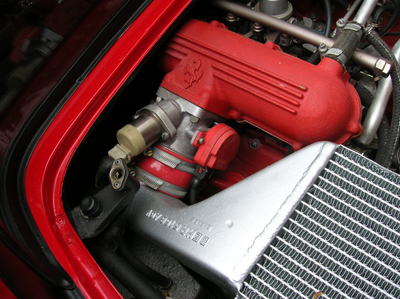 Fuel was spraying all over the ignition wires and exhaust manifold under the throttle body. I shuddered to think of the results from this fuel spraying like this when the engine was running with ignition arcs and a hot exhaust manifold. I have a couple experiences with engine fires, and trust me, one is plenty! 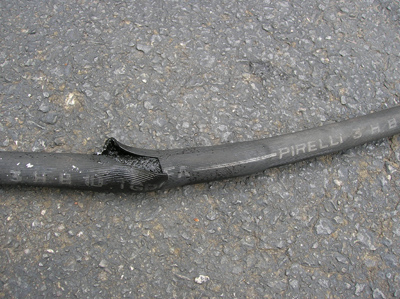 Reaching under the throttle body, I could feel the source of the leak. The main line from the fuel pump feeding the fuel rail was split and soft. You can see from the hose how it was completely eaten away from inside and failing. The Pirelli stamp on the hose shows this was probably originally installed in the mid 80s when the car was built. It seems obvious that something in the fuel is eating the hose made in the 80s, and I can only imagine all these cars are experiencing the same thing. With the same result in a Boxer we worked on several weeks ago, I can’t stress enough to GET YOUR FUEL LINES CHECKED!!! If they’re feeling spongy, they’re probably disintegrating from the inside out. Once the fuel eats through the inner hose, the outer sheathing will swell up and get soft. We don’t normally work on 80s Ferraris, but if you others that own these cars, please spread the word!