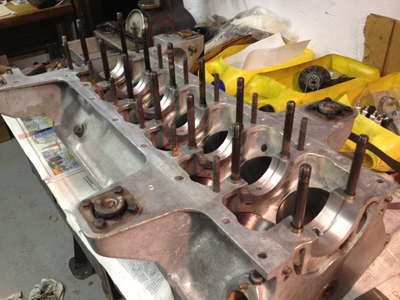 The engine block came back from the machine shop for the 275GTS we’re restoring. It was bored, honed, align bored, and ready for final cleaning and preparation for assembly. I also installed new motor mounts after the old ones were pressed out. 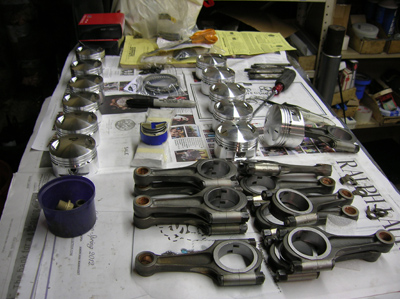 As I mentioned on my Facebook post this week, we set up a table with all the associated pieces for the engine rebuild, and it looked like a surgical table. Francois always stresses order and cleanliness in his shop, and an engine rebuild requires the utmost adherence to this rule. 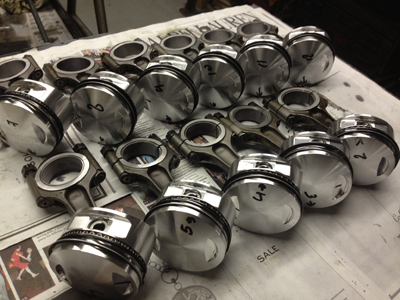 With just the right amount of retainer clips, rings, and bearing shells from the supplier, misplaced parts can really hamper assembly. We marked the pistons so the rods could be installed correctly, and made other marks so all the various rings could be oriented according to the manufacturer. With each step, Francois showed me potential areas for mistakes, and how he has found these mistakes in other engines he’s disassembled. Everyone makes mistakes, but it’s really important to double check, and then check again, to insure this crucial process is done correctly. 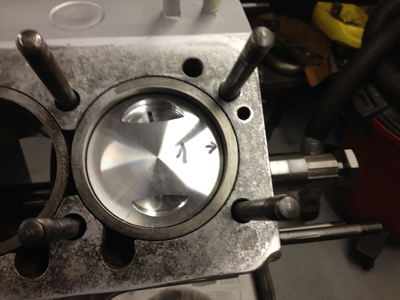 I’ve assisted and installed parts on several engines before at the shop, but I take advantage of every opportunity when Francois shows me again. This repetition helps me learn from someone who has built hundreds of Ferrari engines in his lifetime, and pick up the little nuggets of knowledge that only comes from doing. 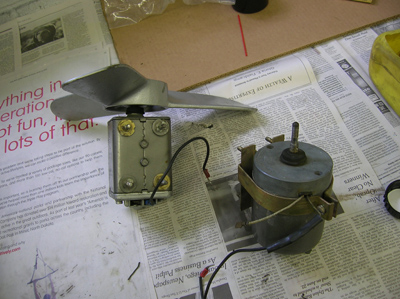 On the other side of the shop, I started work on the fans of a Series II 330. When the engine came up to operating temperature the two electric cooling fans would come on in front of the radiator, but they would soon blow the fuse in the circuit. One of the fan motors was the older square bodied Lucas motor while the second motor was a later round bodied Lucas motor. I’m pretty sure this car came with matching square bodied motors, and perhaps the second motor was a replacement? I’ve also seen SII cars come with two of the round bodied motors, but perhaps we can come up with a consensus by surveying other 330 owners on what they have in their cars?

Whatever the case, I discovered the second round bodied motor was causing the fuse to blow. Both of these motors are horribly inefficient, and draw a lot of amperage when running, so as they wear, I’m sure resistance rises, causing more draw on the electrical system. If this were a show car, I would try to rebuild these motors, or try to find a proper replacement, but the owner of this car wants a reliable driver without spending  a lot of time rebuilding these motors. My suggestion was to put these motors in a box, and install a more efficient modern electric fan to cool the engine. 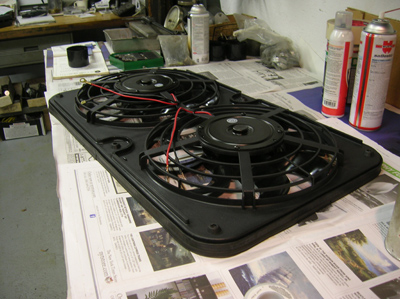 Flex-a-Lite makes a nice dual fan set up, part number 440, that fits well in the space for the fans. The built in shrouding directs air more efficiently towards the radiator, and should do a better job than the old fan blades. 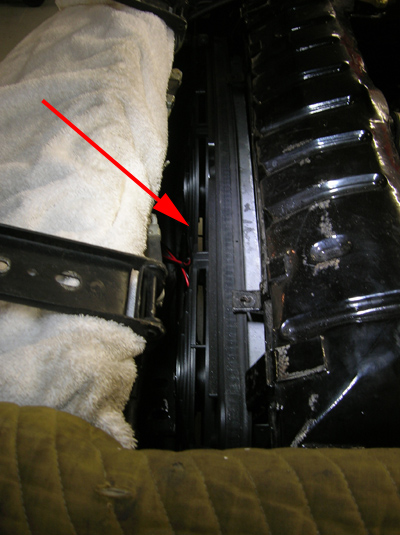 This car has air conditioning, so the space was even tighter for the fan, but I managed to make it fit in front of the condenser. I fabricated brackets to hold the fans in place, and can easily put the old fans back if the owner wants to show the car in the future.