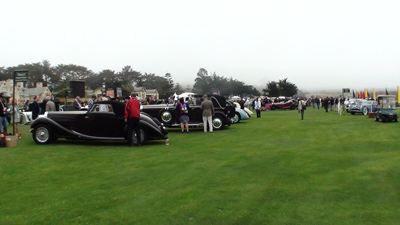 I arrived at Pebble Beach on Sunday at about 7am. It was a good time to see the cars as the crowds have yet to arrive and the cars are still being placed on the lawn. 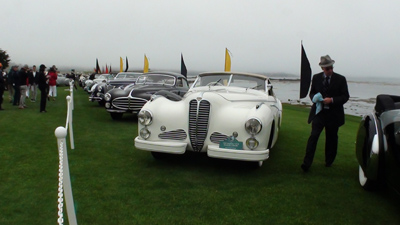 The weather was typical of Monterey, cool and damp, and it always sets a nice mood for the cars. 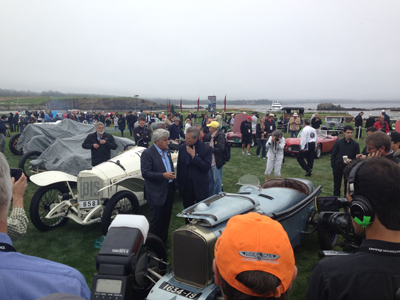 Jay Leno was doing the usual interview or presentation on the lawn followed by dozens of fans.

In the foreground of this picture you’ll notice the orange baseball cap worn by a spectator. These “Dawn Patrol” caps were given out to people who arrived at Pebble Beach “early o’clock” from Hagerty. What started out as a nice freebie for the guys who had to be on the lawn early in the morning to set up the cars has turned into a corporate sponsored monster! These free hats are worn as a badge of honor because of the limited supply, and difficulty in getting them. Just getting to the lawn that early can be a challenge unless you have special parking permits. General parking shuttles aren’t even running that early. Some people take cabs to the event just to get a hat! A friend of mine at Hagerty told me when the girl handing out the hats couldn’t pass them out fast enough, people were grabbing them out of the box! All I can say is, I slept in. 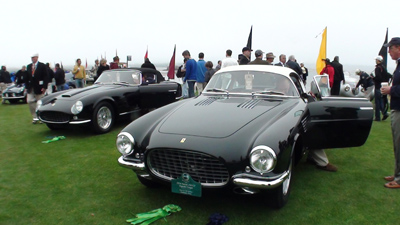 The “usual suspects” were showing Ferraris on the lawn that were restored to the highest of levels. 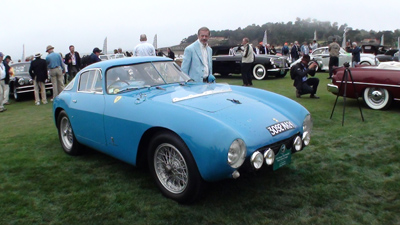 …But I was more interested in a car presented by Jon Shirley. He had a car in the growing “Preservation Class” section of Pebble Beach, and having won the same award at Concorso, I sized up the GTE next to Shirley’s car in originality and provenance. Jon told me his car came out of a castle cellar in France and the story he told certainly beat mine about pulling the GTE out of Tacoma Washington, but for a moment we shared a mutual respect. 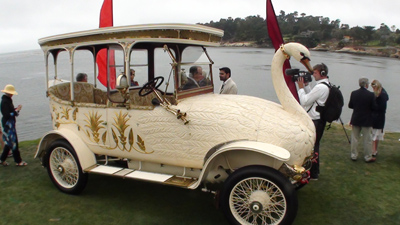 As usual, there were some spectacular cars on the lawn at Pebble Beach, and the “Swan Car” stopped a lot of people in their tracks. 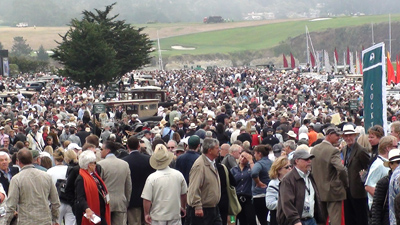 By about 1 pm Pebble Beach seemed to reach critical mass, and I couldn’t believe the amount of people on the lawn. I took this time to find quiet corners on the sides of the show field to meet up with friends and owners of Ferraris. There was no way to enjoy looking at the cars at this point, but I still could meet the owners!