Although it may seem it’s been a while since I last posted, I had a lot to write about on my return from Monterey, so I got a little burned out. I sometimes can’t believe I’ve been posting to this website about Ferraris for over 13 years. In fact I’ve been blogging longer than there were such things as “blogs!” I do enjoy posting, but every once in a while, I get overwhelmed with the normal commitments in my personal life that posting a new post, despite plenty of news, becomes hard to do. Fret not however, I’m back at work and here’s the latest! 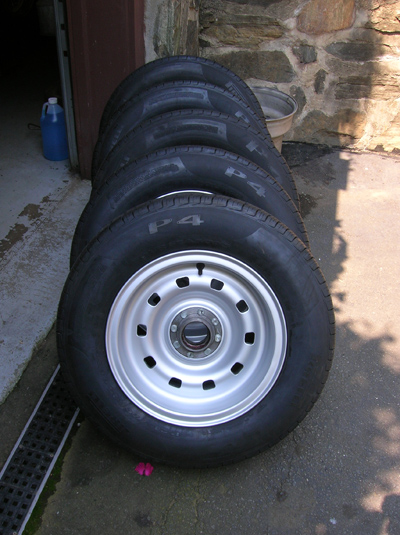 While I was away in Monterey, the wheels for the second 330GT were painted and ready to pick up. We had a real hard time looking for Pirelli P4000 tires. It looks like Pirelli manufactures a limited run at a time, and when they run out, we all have to wait for another batch. I ended up buying P4s so I could get these wheels mounted, balanced, and put into service. 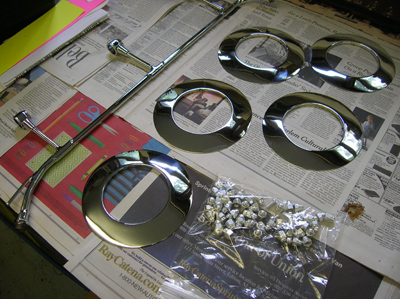 The plating came back and everything looked great. I was waiting for these pieces so I could put the valve covers back on and the fuel system back together. 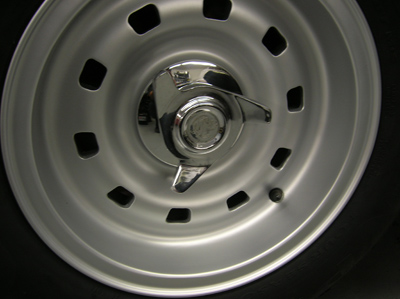 The trim rings look great mounted on the wheels. 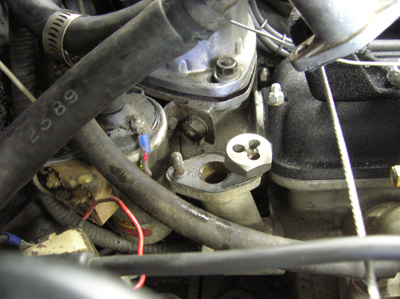 As the top of the engine was being put together, I ran into the usual little things that crop up when putting a car together. A stud for the heater shut off valve was a little chewed up so the nut wouldn’t thread well. With everything apart, now was the time to chase the thread with a die to clean things up. Little procedures like this tend to stop the flow of work, but adds up to making things right on these old cars. 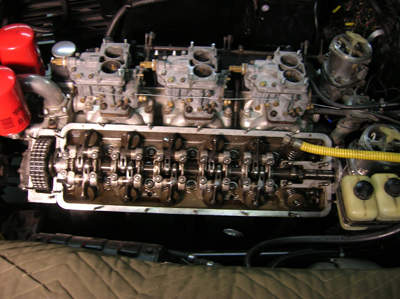 I put the whole engine back together after doing a valve adjustment, and something was terribly wrong! At idle, the engine was back firing through the carburetors or the exhaust, and there was no adjustment that would fix the problem. It definitely sounded like an ignition problem, and Francois asked me to double check my work. I looked at the newly assembled spark plug wires for a crossed wire. I double checked the plugs and the timing for both banks, and found nothing wrong. 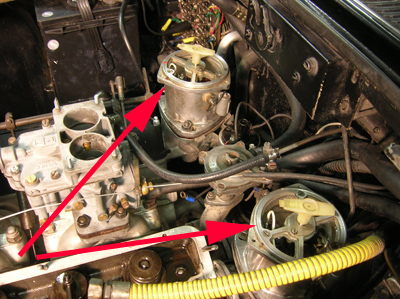 The car felt like it was timed 180 degrees out of sync, but when I took the distributor caps off, the rotors were in the correct position when the engine was set at 10 degrees BTDC for cylinder #1. 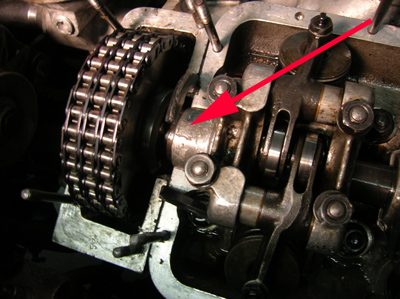 The only thing left to check was the cams and whether they were on factory marks. When we took a look at the 7-12 bank, it became evident that this cam was changed at one time. The timing mark that is supposed to line up with the the arrow when the engine is set to PM1/6 was not there. When we checked for the cam timing to the marks on the flywheel, we found things were off, so we were getting close to our problem. 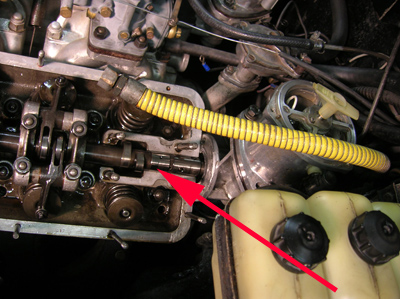 Francois and I ended the day without a real resolution, but a direction to look for our problem. What baffled me was the fact that this car ran reasonably well before the tune up. What changed to cause the engine to run so dramatically bad?  When I got to work the next day, Francois asked me to take a closer look at the engine and tell me what I saw was wrong. He obviously had a eureka moment overnight, and was testing to see if I could see what he saw. I slowly looked at the engine and its settings. The flywheel was set to 10 degrees BTDC for the 7/12 bank,… so # 7 cylinder should be ready for ignition,…meaning the valves should both be closed,…but wait, #7 had the cam lobes pointing up, meaning the valves were opening when the ignition event was happening. WTF?! Whoever assembled this engine mistook cylinder #7 for #12 and timed the cam backwards! Since Ferrari V-12 engines are basically timed as two 6 cylinder engines, when the front cylinder is on it’s compression stroke, the back cylinder is on its exhaust stroke. 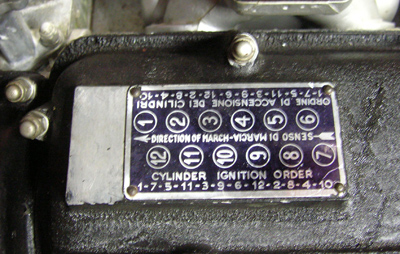 Whoever installed the camshaft on this engine when they rebuilt it made #7 cylinder into #12 and #12 into #7! It’s amazing they did this when most Ferrari engines have this plate riveted to the valve cover showing how the engine it timed! In almost 50 years of working on Ferrari engines, Francois has never seen this mistake. The engine ran reasonably well timed like this, but not the way the crank was designed. When I restored the ignition system to the correct firing order, never thinking this was opposite to what was in the car, the problem arose in the backfiring. We restored the camshaft,  reset the 7/12 bank to  the correct settings, and got this engine back to the way it was designed.

I looked up the receipts on the engine work on this car and it was done over 12 years ago, and was surprised no one spotted this problem before? Just trying to get timing set would have shown something terribly wrong! The shop that did the engine work was a British specialist, so they obviously were not familiar with Ferrari engines, so if no one told them of their mistake, they could still be doing it to other Ferrari engines today if they’re still in business! 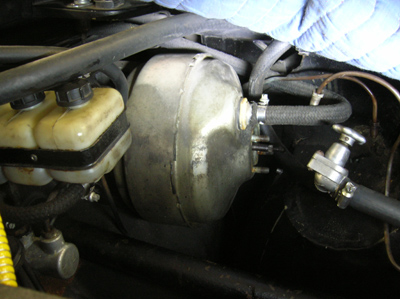 While Francois was working on the black 330 and the camshaft issue, I put some time in the silver 330. We sent the brake master cylinder out for rebuilding, but it’s looking like the booster is failing as well. I should have suggested rebuilding the booster along with the M/C, but hind sight is always 20/20. Sometimes suggesting “might as well” jobs make customers think you’re trying to do extra work, but pulling the booster is no fun as there is one nut that is not easily accessible, so I was certainly not volunteering for the job! 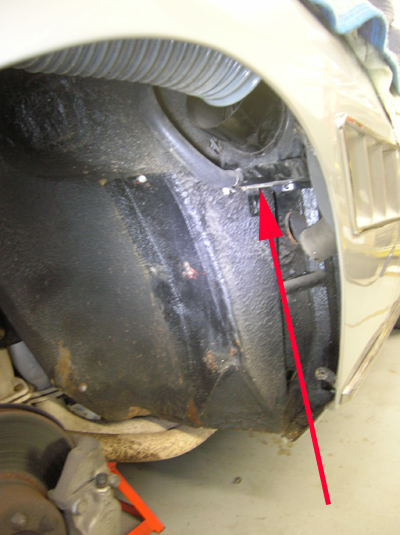 I’ve found one of the ways to get a wrench on the nut is from behind the fender. I have to reach behind the heater core box to feel for the head of the nut, but with a little persistence and a couple degrees of a turn at a time, the nut eventually came out. 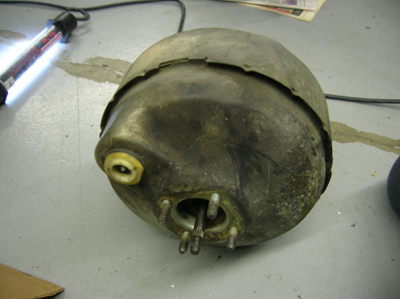 I got the booster unit out, boxed and shipped to the brake rebuilder.